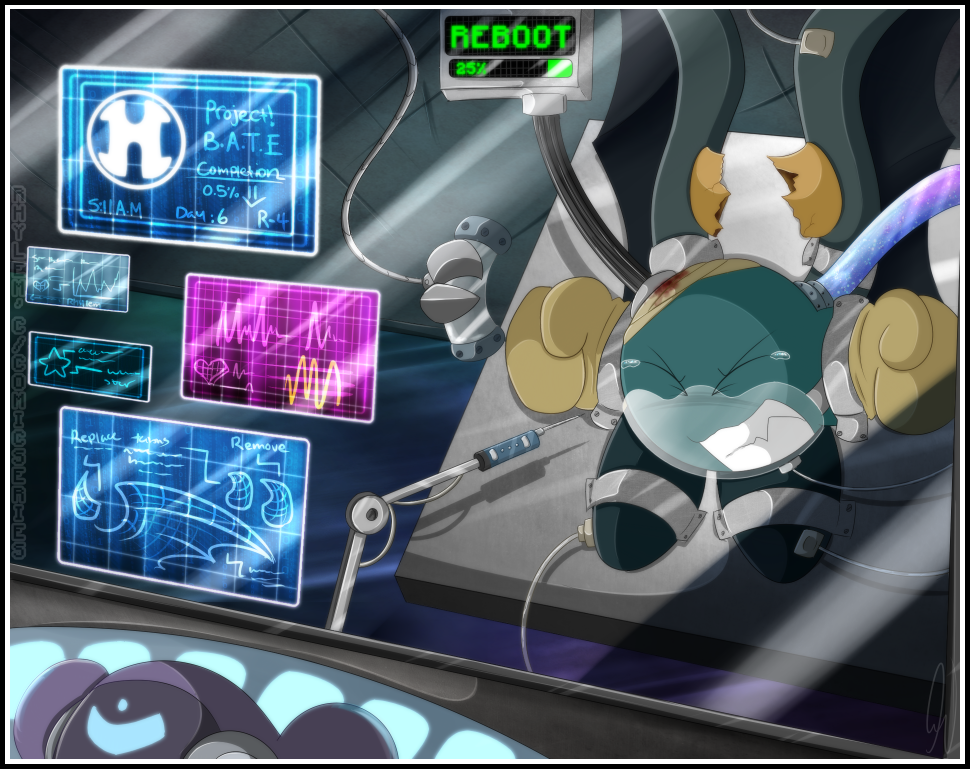 “M-ma’am,” Her assistant turned away from the large monitor and handed her a clipboard of the current results, “After multiple tests, the report shows that he's still resisting. I’m sorry, but we are unable to progress to the next phase until further notice.”

“Hm, I see….” Her eyes slightly narrowed from his response and looked up at the figure in the other room. Stubborn things, these creatures were. She had already planned to have him finished almost a week ago, and yet- little to no progress has been made. Just what in the world was keeping him intact….

“There’s something else you should know….” Her assistants’ voice quickly shook her thoughts, and she broke her gaze from the figure. “Our specimen isn’t....taking these tests lightly. He already damaged several of our machines. A dozen of our soldiers had to get repairs from trying to hold him down, and seeing as this is our 4th reboot session...should I go ahead and just administer sedation?”

“Oh- no, no. Let me have a word with him first.”  She gently placed the clipboard down before heading into the room where they kept him. "We wouldn’t want to do something as rash like that to our guest.”


“Oh, dear- what are we going to do with you?” She said as she entered dimly lit room.

The monitors surrounding her provided enough light to barely make out the Puffball strapped to the metal table. He didn’t speak, but the harsh glare he returned was enough for her to take the hint.

“Can’t you see that you’re wasting the time of not only our employees, but the Haltmann Works Company every time we run these tests?” She said as she placed a hand against the side of his newly wrapped head,  “Don’t you wish to become more advanced like us? I have seen your abilities, Sir Bate, and I must say- you're truly powerful indeed.

She saw him trying to shake away her touch, so she retracted her hand and faced one of the monitors above him.

“Of course, creatures like you have these things called ‘limitations.' And according to our reports, it seems like yours exceed faster compared to even the simplest of life forms. Shame, isn’t it? Born with the power to crush and destroy the very earth below you, and yet you can’t even use it without the risk of gravely injuring yourself."

She turned away from the screen and faced him again,

"But, we can fix that. We can make it so that you can keep fighting without needing to rest ever again. Flying faster than you ever thought you could, defeating anyone who stands in your way with a single hit. You don’t need to hinder yourself anymore, can’t you understand that we’re improving and helping the lifeforms of this simplistic planet. With us, Sir Bate, you will know what ultimate strength feels like. We will bring out the true power you possess, and we will make sure that you will never have to worry about petty things such as weaknesses or limitations."

She stood back and waited for his response. She watched as he carefully mulled over her offer. Was her persuading statement enough for their project to continue? The chance at absolute perfection, he’d be a fool not to accept such an offer….

“I…..” He tried his best to speak as he was still recovering from the recent operation they performed on him, “I r-refuse….”

“And is this the decision you stand by?” She said, knowing there was no need to state her reasoning again as creatures like him had a knack for being quite stubborn.

Bate tiredly closed his eyes, “Y-yes, I am weak, but that is something I accept. W-we adapt to our defects. We learn, and in r-return, we grow as a result. We don’t need to rely on upgrades like you. T-there…is nothing….wrong with us…..”

“I see,” She stated, not amused or moved from his response at all. “Very well, then- If that is what you wish. We’ll see in the end who’ll win; your meager beliefs, or our technology. But believe me when I say this, Sir Bate, you should've taken my offer. I’ll be sure to fully wipe out what ever freewill you have left. You’ll be nothing but a mindless solider for our company. You will have no control, no say in our order, and absolutely no chance at ever going back to your previous form. I ask one last time...will you reconsider?”

A small chuckle echoed the room, and using what strength Bate had left, managed to open his eyes to lock them with her, “I w-will not. Even if you succeed in transforming me, it will all be a waste. There are those who are much stronger than I. T-they will find you, and they will stop you….”

“Even if it means them destroying you in the process?”

“You say destroying,” He huffed through his mask, “I say it’s more like rescuing...."

“Hm. So be it.” She said, not bothering to entertain his words anymore. She faced her assistant who was watching in the other room and gave him a nod to continue.

“I’ll come by the end of the day too see if you’ve still retained this conscious that you hold so dearly.”  She said as she left the room, not bothering to look back then she heard the sounds of the mechanics booting up again,

After being captured, Bate fought to the very end until he was ultimately transformed and used to fight against Meta and Kirby. He refused their offers as he trusts that his successors will be able to defeat not only the company, but him as well. u///u

Regarding the aftermath once he's saved by Kirby: Bate would probably be extremely anxious when it comes to technology. His fear of being bound increased greatly, and has made him very jumpy if anyone comes close to him. He’d also avoid anything that looks like an operating room for a bit until he’s calmed down. He would also have a few scars on his back from where they attached the tubes. ;;
Species © Nintendo/ HAL Laboratory
Interpreted characters created from said species © Rhylem