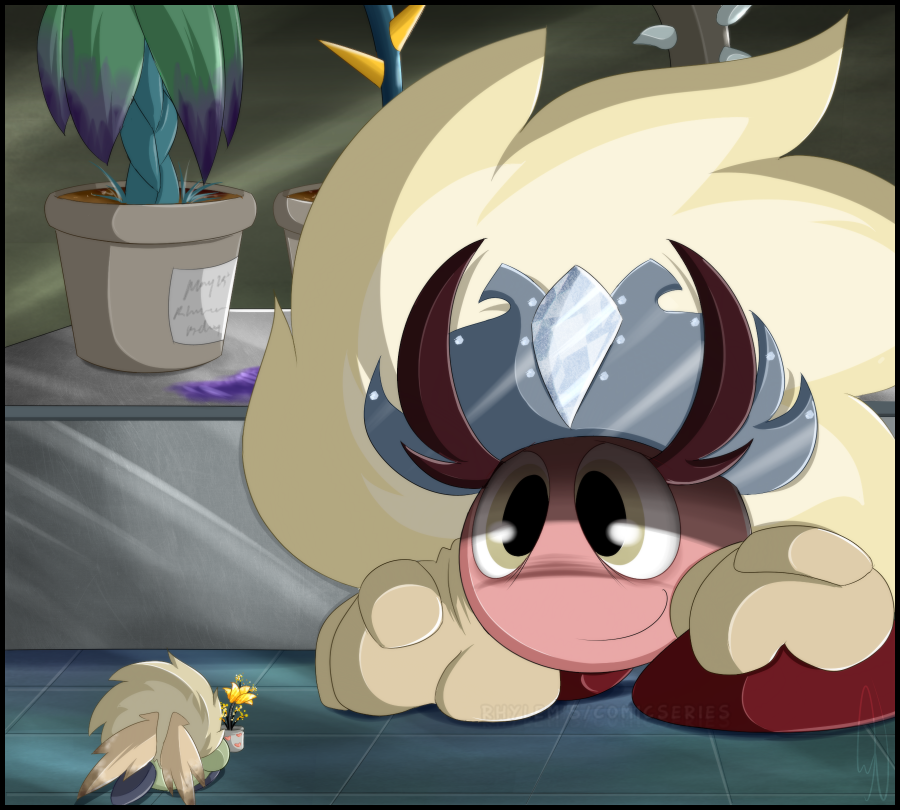 
​
​“Atticus.” Arthur called out to stop his son when he heard him toddling to a certain room in their house once again. He’s already had to stop him several times throughout the evening, and the elder couldn’t help but sigh at his persistence. He could understand why Atticus wanted to see his mother since today was a very special day, but unfortunately today is also the day Petta doesn’t like to be disturbed as she has to carefully extract, mix, and concoct their son’s medicine from several rare plants and herbs. It can be a very stressful time for her since one false move can result in completely ruining the whole batch. Arthur slightly cringed when he remembered how frustrated she can become, and he made sure to stay clear for the next several hours until she was finished. Atticus on the other hand....

“Atti, I already told you that she’ll be out in a few hours.“ Arthur got up from his seat to motion him away, but stopped, however, when he saw what the child was holding.

“B-but Dad…I….I have to give momma her mother’s day present!” Atticus spoke and held out the small potted plant he’s painstakingly raised for this very occasion. He never had the chance to give it to her since she immediately left after thanking him for the breakfast he made. She hasn’t left the room since, and because it was already getting late, Atticus knew he had to see her before the day ends. “Is…she almost done?”

“Not quite….” Arthur spoke as he contemplated about letting him see her. “It’s a very delicate process, and she likes to work in absolute silence since she’ll have to completely start over if something gets messed up. You wouldn’t want that now, hm?"

“N-no, but….the day is almost ending. Can’t I just see her for a minute?” He begged, “I promise I won’t touch anything, pleaaaaaase?"

'Sweet Nova, I may have fought in the war, but Petta has the power to knockout an entire army if pushed to a certain point. If she knew I let Atticus down there….' He nervously thought of the worst possible scenario, and shivered at the outcome. Then again….Atticus did promise, and it’s not like Petta would ever get angry at their son, so…..

“Hmmmm….okay, okay- you can see her.” Arthur finally decided and gripped the handle of the door to open it for him. “But please, Atticus, only to drop off your present.”

“I promise!” He smiled and eagerly dashed in once he opened the door. The Leo faced forward once Arthur closed it, and cautiously made his way down the flight of stairs; trying his best not to make any loud noises to startle his mother. It didn’t take long to spot her, but before he could even speak, he heard her angrily mumble under her breath as she loudly slammed her fists on the table she was working on soon after. Atticus’ wings anxiously fluffed up since he never saw her this angry before.

He backed away to where the steps were again, and tried his best to climb it before being spotted. Maybe it would be better if he gave it to her tomorr-

Attiucs’ face started to heat up when one of the steps loudly creaked, and his eyes snapped forward when she saw her quickly turning around. Her frustrated, harsh features quickly changed once their eyes met, and Atticus kept still when she turned her attention away from all the plants she was working with.

“O-oh, Atticus. I’m sorry, I didn’t hear the door.” She softly spoke and gave him a warm smile. "Did you need something, sweetie?”

“N-no, I…ummmm….” Atticus was still a bit shaken up, so he just held up the small plant in front of him.

Petta noticed how timid his son was acting towards her, and figured it was because he was in the room when she hit the table. A small wave of guilt caused her to tense up as well since she never wanted him to see her in such a manner. She briefly glanced at the broken beaker she accidentally dropped that now caused her to start over again before giving a sigh and kneeling down to Atticus’ level. It can wait, her son’s happiness comes first of all things.

“Aw, Atti, you didn’t need to give me anything.” She asked, referring to the plant he was holding. “Could you please come over so I can take a closer look?"

The Leo shyly lowered the plant to look at her mother again. Her behavior was the complete opposite of what it was moments ago, and his wings perked back up to its normal self as he ran to her.

“Moor Stardust- Oh, Atticus, it’s beautiful.” Petta spoke as she carefully took the small pot from his hands. “Thank you very much, dear, I love it."

“I grew it all on my own, too!” He smiled when he saw how much she liked it. Even if it wasn’t as vibrant or large like the ones she grows, and the fact it was probably the easiest plant to raise for beginners, the Leo couldn’t help but beam when Petta praised his work.

“And you did such a wonderful job. I can see all the hard work, and dedication it took to raise and grow it.” She reached over to give him a kiss. “I’ll be sure to put this right in front of my shop tomorrow so everyone can see.”

“Really?!!!” Atticus couldn’t believe it. She was going to showcase his flower? It was usually the rare ones like Dyna star or her prized Maxim Tomato plants that take her over several years to grow.

“Really.” She giggled when he saw how excited he got. She placed the gift on the table behind her and picked up the small toddler. “How else will my customers know that we have a talented little gardener on our hands.”

“Thank you, Momma!!!." He nuzzled her while she gratefully returned it. Whilst in her embrace, Atticus got a glance at the table where his plant was and noticed the shattered glass and puddle of purple liquid now dripping on the floor. In the midst of his happiness, he almost forgot about the incident prior to his gift. He pushed himself away and sadly looked up at Petta.

“I…I’m sorry...” He quietly spoke with guilt lingering in his voice.

“Sorry? For what, dear?” Petta then watched as he pointed to the table.

“You were down here all day. Y-you didn’t even get to celebrate like everyone else.” He said, knowing there was a rather large event in the main plaza. Petta insisted she’d stay while the other two went when the subject was brought up during breakfast.

“It’s fine, sweetie. I don’t need to celebrate to know how much you two care.” Petta reassured, but Atticus, being as stubborn as his father, shook his head.

“But it didn’t even matter in the end! You have to start over again.” His eyes started to fill up with tears now. “We could’ve been celebrating, but we didn’t. You wouldn’t always be down here if….I w-wasn’t so…..” The Leo burrowed in his mother’s arms once more as he knew he was the reason for it, but was too ashamed to say it to her. Petta, however, quickly picked up what he was going to say and hushed her son.

“Now dear, haven’t we went over this before?” Her voice not as lenient, and much more stern since her son has a habit of always blaming himself.

“But it’s true...” He mumbled, knowing his mother was just say that to make him feel better.

“Atticus, please listen to me.” She set him down on one of the steps and locked eyes with him. “I stay and work down here because I don’t want to see anything happen to you. Yes, it’s very time consuming, and I know you saw me getting angry earlier when the beaker slipped, but…..” Like Atticus, she started to tear up trying to explain it to him.

“I would rather do this for the rest of my life if it means having to spend another day with you. You’re everything to me- my world, my happiness, my laughter, and I don’t ever want to lose that. I will always be there for you, and I will do everything in my absolute power to make sure my precious little flower is happy and safe. I'm your mother, Atticus, and I love you with all my heart. Don’t you ever forget that."

"I....I won't." He finally spoke after taking in what she had to say. Atticus slightly smiled back at the Leo in front of him when he felt so better about the whole situation. It must be a mother thing since she always had a way to make him smile again. "I l-love you, Momma."

As the child ran up to embrace her once more in a comforting hug, Petta felt the weight of her work start to dwindle and simmer down. She got up and started to head up the stairs to spend the last few hours of Mother's Day together as a family.
-End-


Something small for Mother's Day. Since I usually do Bate and Suna, I decided to pick another momma to work with. So take some Atticus and Petta fluff~ (He's about....6 in this.) Anyways, Petta's the one who has to make her son's medicine each month, so it can be very stressful in some cases. After accidentally messing up several hours of delicate work, she decides to take a small break to spend it with the one she's doing it for. ;u;

I also like making up plants. It's fun. XDD Though Moor Stardust is loosely based off of the stargazer lily. <333
Species © Nintendo/ HAL Laboratory
Interpreted characters created from said species © Rhylem