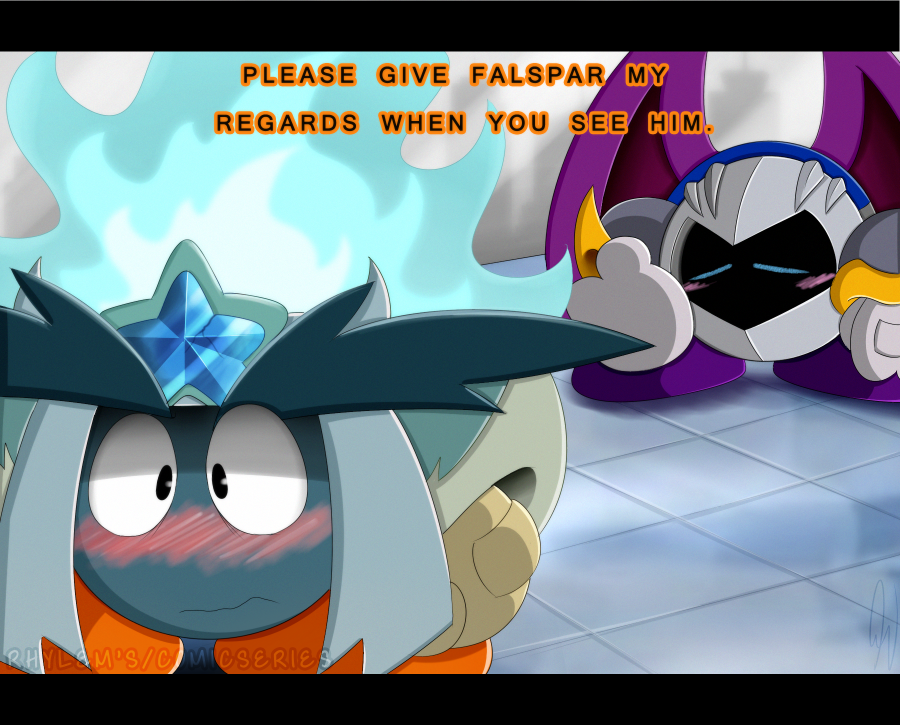 
​
Of course it was something he would never speak openly about. He isn’t seen as the affectionate type nor does he show that he’d ever want such a thing. Not like being seen in such a way, he never hinted that side of him when others were around. The thought of anyone finding out is quite terrifying, actually. So when one of his comrades comes waltzing in out of nowhere and bluntly says it, of course it would be something that’ll put him on edge.

Pyrell stared at the masked figure in front of him. Both of them locked eyes and didn’t speak a word. The Leo stood his ground and refused to move, eyes glaring at the navy Puffball.

“What do you think you’re doing here?” He spoke, a hint of irritation in his voice.

Meta continued to look at the Leo before him. A few minutes passed before he stepped forward, causing Pyrell to slightly raise his defense.

“I’m…..” Meta thought for a second before continuing, “Walking down the hallway.”

Meta knew that would get him angry, and he was right. Pyrell’s hair faired up and his eyes narrowed in fury.

“Was that suppose to be funny?” His voice was sharp and began to raise in volume, “Watch who you’re talking to, runt.”

Meta gave a meager shrug, “I’m sorry. I didn’t know it was a crime to be in the same hall as you. I’ll remember to clear the way when I see you next time, great superior”

And again, Pyrell didn’t take lightly to the warrior's humor. The Leo grunted in anger and took a step towards him. “Your mentor must’ve did a pretty crappy job raising you if you think it’s okay to talk down to one of your leaders like that.”

“He raised me quite well, thank you. Maybe it’s you who needs the attitude adjustment.”

“Excuse me?” His brow slightly twitched in anger. “You have a problem with my behavior?”

Even though Pyrell knew he was messing with him, the mere presence of Meta was starting get eat at his patience. He decided for the sake of keeping his anger in check to leave. He looked at the Puff one last time before heading the opposite way.

“I don’t have time for this,” He annoyingly rolled his eyes, “I have better places to be."

The warrior watched as Pyrell angrily stomped the opposite direction. About 3 steps in Meta decided to say something that he personally knew would get him to stop in his tracks.

“Ah, I see,” Meta bowed, “I shouldn’t have kept you for so long, I know it’s not in your nature to keep others waiting. Please give Falspar my regards when you see him."

And like before, he was right. Pyrell stopped the moment he spoke those words. Meta felt a hint of pride that he was able to make his superior freeze like that. He watched at the elder warrior stood in absolute shock and disbelief.

Meta, though not in his nature, finds it extremely amusing to poke fun of Falspar’s comrade; mostly because he isn’t able to handle any type of insult or teasing without him flipping and lashing out. He couldn’t figure out why, maybe it was due to him badgering Bate over the years when he was growing up, but seeing one of his leaders lose his cool was somewhat rewarding for him.

“Is…there a problem, my superior?” Meta finally spoke up after some time.

It was clear Meta was toying with him, but now his simple teasing was starting to get on his nerves. Pyrell gave a low growl which caused small flares of fire to slip through his teeth. He turned around and shot a few at the Puff to show his wasn’t joking anymore.

“I don’t take kindly to humor, nor do I have the patience for it.” He snarled, “I suggest you don’t start digging for trouble if you know you can’t get out, got it?”

“Crystal,” He gave a halfhearted salute. “…...Though I do find it odd you don’t take kindly to humor,”  He started again, pushing his luck, “It’s quite strange you’d say such a thing seeing as you like-"

“Oh, you’re finally here.” The Puffball poked his head over the couch he was sitting on. "You’re late…. that’s a first.”

Falspar watched his comrade enter their room, quite distracted and a bit tired. He slowly made his way to his bed and started to take off his armor.

“There….was an issue,” He mumbled and walked towards the small couch to join his foolish comrade.

“Meta, really?” This caught his attention, and he stood up in haste to head to the door. “What happened? Is he alright?”

“Don’t worry, he’s fine.” He reassured and motioned him to sit again, “I took him to the infirmary. Actually, that’s the reason why I was late."

“O-oh…okay.” He calmed down sat back next to the Leo, “Do you know what happened, though?”

“I can’t really say,” He shrugged as humorous smirk started to form that escaped Falspar’s view.