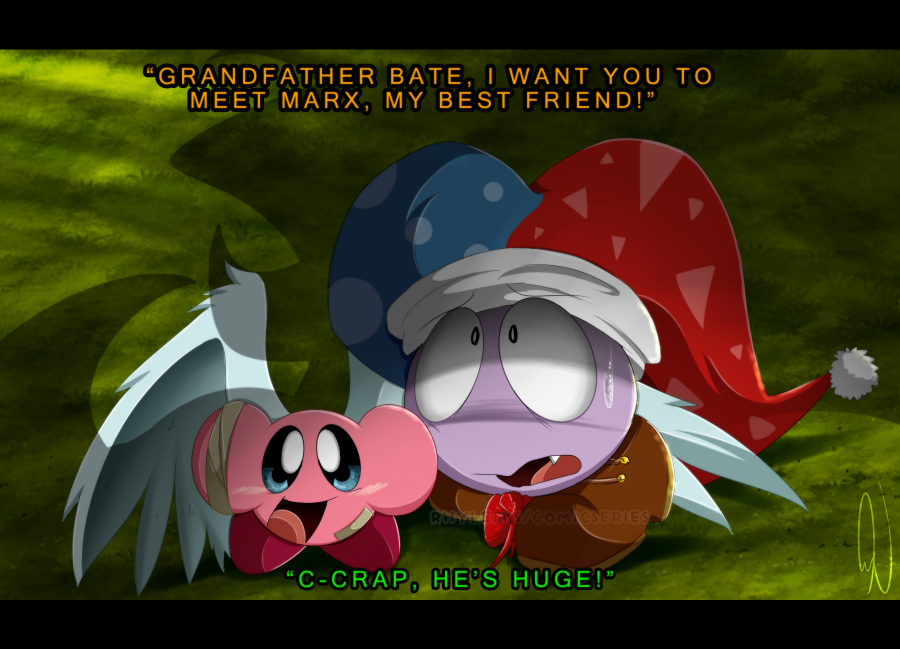 It’s not like he’s really complaining about it now. He finds it quite amusing to be around him. To “play" with him, to laugh at him, to joke with him. Though…many would call his joking flat out bulling.

It’s quite the opposite, Marx would say. What others call bulling, Marx calls amusement. The way he squeaks when he “accidentally” falls down a hill, or the way he starts groveling when one of his favorite toys somehow broke, or when he begs his teacher to buy him another ice cream when his fell by mistake. The best thing, however, is a really cool beach ball he “borrowed” from Kirby when he got it from one of his relatives. Marx proudly states it's his pride and joy, and just seeing how Kirby awkwardly stares at it when he bounces past him makes it oh so enjoyable. Sure, others may not think it’s funny, and Marx agrees. It’s not funny, it’s hilarious!

The fact Kirby still sees him as his friend just proves his point. The little Pink Puff really is oblivious. And as long as he stays oblivious, Marx will always be there for his best friend.....


“Oh, I can’t wait to introduce you to him!!” Kirby happily marched ahead while Marx slowly followed from behind.

“Oh, joy....I can’t wait.” He rolled his eyes since the last thing he wanted was to meet one of his family members.

“I know, right?!!” The Puff squeaked in joy. “My Grandfather Bate never visits Pop Star, so you’re in for a huge treat! Maybe he’ll even let you fly on his back, I know how much you always wanted to fly.”

“Grandfather? Oh, yeah, I’m sure he’ll be able to carry me no problem! Right after he pulls out his back.” He mumbled from his friends boneheaded sentence.

Kirby didn’t seem to catch the last part as the little Puff quickly dashed to his house to fetch him. Marx quietly waited outside and sat on the grass below.

“This is stupid. I had plans today, and now I’m stuck having to make small talk with some old bat who probably can’t even stay up without dozing off half the time…"

“Maaaaarx, hey Marx! Pay attention and turn around!” Kirby shouted when he returned.

“Yeah, yeah…I heard you-“ Marx began talking, but quickly shut up when he saw the figure in front of him.

“Grandfather Bate, I want you to meet Marx, my best friend!” Kirby beamed, and pushed the terrified figure closer to him with his wing.


Bate shifted his attention to Marx, and it was at that point he could’ve sworn the old warrior was going to kill him. He looked so unamused, so angry.....like......like he knew all the horrible things he’s done to Kirby. Not only that, but…

“C-crap, he’s huge!” Marx thought to himself, as his feet started to quiver. He didn’t speak a word, but eventually looked away when Kirby finally spoke.

“Oh! Here, let me go inside and grab the sandwiches Grandfather Bate made for us! We can all have a picnic outside!!” Kirby toddled away from the pair and left Marx with his disgruntled grandfather.

“Hey, hey, hey!!!” Marx spoke and grinned at the Puff. “Kirby has been talking so much about your arrival! I, for one, am really honored to meet you!”

Bate didn't respond, and just continued to look at him.

Marx would be lying if he said he didn’t feel slightly intimidated by his large frame, and equally large talons. He just continued to smile at the elder, and slowly started to head to the house. “Y’know......I’m sure Kirby will need help carrying all of the items outside! So, I’ll go and see if he needs my assistance. It, ah, was really nice meeting y-“

“Stay away from my grandson.”

Marx froze once he heard his voice; his smile gone, and replaced with a terrified, morbid expression. He wanted to turn around to face the old Warrior, but couldn’t muster up the courage to do so. Bate slowly marched forward as his eyes started to slowly change to a bright orange. Marx made sure to keep his head down and avoid eye contact at all cost.

Apparently his grandfather wasn't as oblivious as the little pink twerp.

It seems like Marx failed to get the old warrior to like him. Bate knows there's something off about Marx. Of course, Kirby telling his grandfather prior to them meeting how rough he treats him certainly didn't give Marx any brownie points. (And, y'know, poor Kirby got injured because Marx tripped him by 'accident')
Species © Nintendo/ HAL Laboratory
Interpreted characters created from said species © Rhylem