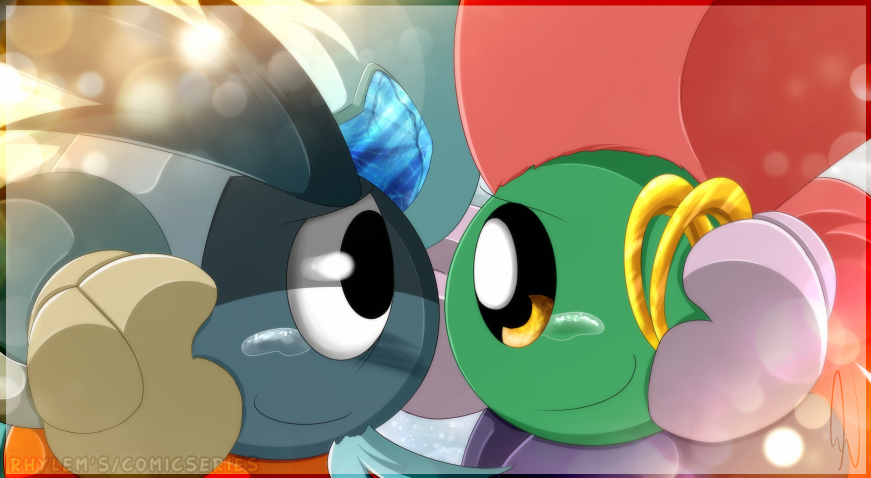 With the bands safely secure in his hands, the Puff looked over at the warrior who made them and gave a small, weary sigh. “Teacher Bate, what if….I don’t know, he says no?”

“You know him better than anyone, Falspar. If you requested these to be made, then I’m sure you know how he’ll react when you present them.”

“But…he could think it’s out of pity.” Falspar spoke as his mind started to create the worse possible scenarios. “I don’t want to lose him because I thought he wanted the same but doesn't. What if he leaves? What if I never see him again? What if....he hates me because of it?"

The optimism and boisterous spirit he once showed earlier in the evening was now the complete opposite. Doubt and fear took its place, and Bate couldn’t help but walk over and place a supporting hand on his shoulder.

The frightened warrior glanced up at the elder, and Bate shyly rubbed his head since he and Falspar never really talked one on one about this sort of thing before.

“It’s normal to feel this way. I’d be lying if I said I wasn’t the same when I proposed. Love is...well....” Bate’s voice lowered as he tried to find the right word for it. Then again, how does even one begin to describe such a thing? Nova, it’s been so long.

Bate looked up when Falspar answered.  “Yes, that’s a very good way to describe it.” The elder gave a slight smile and nodded. He lifted his mask and looked at the photo of him and Ellie from across the table. He reached over to grab it, and couldn’t help but fondly smile when the nostalgia and butterflies unsurfaced from that day. When he spoke, it was that of pain and happiness of someone who once felt what it was like to truly be in love.

“It’s strange, but oh so wonderful. You have someone who feels the same way about you. Someone who wants to be with you, and someone who wants to walk the same footsteps and start a journey with you. You put your trust in them and in return, they will do the same. They’re, in a way, your other half- your friend, your strength, you happiness...your everything. It’s complicated to describe such a thing, but you’ll know exactly what I mean when you find that special someone."

Falspar snapped his attention when Bate set the photo back and faced him afterwards. “So tell me...have you?”

The warrior gazed at the bands once more and took in what Bate said. What he described is exactly how he felt when he was with Pyrell. He wanted to be with him, he wanted to start a new chapter with him by his side. He wasn’t just a friend, but someone he knew he could trust to be there for him when no one else would. He truly was his other half. Bate was right...

Eventually, he looked up when he was confident in his answer and smiled at the elder.  “I have. I think I...."

"I know for a fact I’ve found the one. I love him, Teacher Bate.” He spoke, tears visible from behind his mask. “And I’m ready to tell him.” He ran up to hug the elder. “Thank you……”

Bate was surprised but the sudden contact, but soon eased up and returned it. “Of course. Anytime, Falspar."

Finding Pyrell wasn’t too hard since he stays in the same area every day during the evening. He tends to act quieter and more reserved than usual. In the distance, he saw the Leo silently watching the ocean; in his hand, a pink feather and a small necklace. Falspar paused for a moment and wondered if this was a good time to bother him….

“N-no….y-you have to do this…..” He quietly spoke when his doubts started to return. He couldn’t back down now after Bate made these for them. Taking a deep breath, the warrior trekked forward and called out to his comrade.

“Hey, Pyrell.” His voice wasn’t as loud and boisterous since he knew Pyrell was busy mourning.

He watched as the figure slightly moved, and it didn’t take long for him to turn around and return the greeting. Falspar couldn’t help but frown when he saw him wiping the tears he’s been shedding over his lost Guardian. He knew it was an extremely touchy subject since she meant everything to him. He wondered- Would he get angry if he brought her up…..?

“Hey, could I ask you something...ah, a bit personal?” The warrior finally spoke with much hesitation in his voice and movement when he pointed to the feather. Pyrell saw, and he tucked both items back in his pauldron before giving a small nod.

“I, ummm….” Falspar inched closer to the warrior and averted eye contact when he spoke about her. “I know how much she meant to you. For a Guardian to sacrifice their very life in exchange for their masters...I…can’t imagine how it must’ve felt for you. To lose your other half...it’s something I’m unable to wrap my mind around. But...I do know she really loved you, Pyrell, and I’m sure she’s happy to know you’re trying to rebuild the shattered half this loss has caused.”

“I…hope she does.” Pyrell spoke and turned around to face the ocean once more. “We’ve always been together, for as long as I can remember. We were always there for one another, because all we had was each other. Without her, I can’t help but feel lost at times.” He gave a sigh and sat back down. “It’s hard trying to cope with the fact I’m never going to see her again. I…need her. I want to hear her laugh, I want to see her smile. I...want her by my side again."

Falspar silently stood and glanced at his pauldrons where the bands were hidden. With another weary sigh, Falspar took a seat next to him and stared off in the distance as well.

“I knew Drani was something special when I first met you, and it was pretty amazing getting to know her. I miss her too, I mean….she helped you get into Nova Crunch, remember?” He said, lightly trying to cheer him up.

Pyrell humorously rolled his eyes and slugged his partner. “Yeah, I remember. She liked the marshmallows, and preferred that over my rice balls."

“One can’t deny the amazing taste of the marshmallow stars.” He laughed, “Hey, what about when I accidentally sliced off part of your eyebrows when we were training.”

This time Pyrell couldn’t help but chuckle. “Consider yourself lucky she held me back before I had the chance to burn your mohawk off.”

“It was an accident, and besides…it grew back, didn’t it?”

A burst of laughter could be heard from the pair soon after, and when both warriors finally started to calm down, Pyrell was the first to speak.

“Thank you, y'know...for trying to cheer me up.” He smiled,  “It’s nice thinking of the happy memories we once shared. It’s...just a shame we won’t be able to do it again now that we’re finally living in Kalmari."

“I….ah….” Falspar started to stammer when he was about to blurt out his confession, but he bit his tongue to quickly stop.


With his nerves rattling him to the bone each passing second, Falspar knew he had to say it. This was it, his final chance....

“I.....know she won’t be able to enjoy the new memories with you in Kalmari, but...” He slowly reached over and placed his hand over his. “You and I….ummm…I mean....well, we can still share them together.”

Pyrell turned and looked at him when he was beginning to stutter, and watched as the Puff pulled something out from under his armor. His eyes widened in shock from what they were, and the Leo locked his gaze with his comrade.

“Pyrell, I….” A heated blush started to form when he was becoming tongue tied, and nervously cleared his throat. “I know I can never replace the other part of you that was lost, but….if you give me a chance, I can be the other half who can do his best to fill and heal that void. I can be the one to make you laugh, or stay with you when you need someone to talk to, or be the shoulder for you to cry on. I....want you to be by my side, Pyrell-  to walk besides me, to be besides me, and to start a new chapter together for the future….so ummm…what I’m trying to say is….”

With a now determined smile once he finished his speech, he turned to fully face Pyrell and held up the bands. “Pyrell…will…you…..m…m-marry me?”

Of course, Falspar wasn't sure how well he’d react to something so sudden, but....the tears and smile he received made him think that maybe, juuuuust maybe it was a yes. Although he never spoke, Falspar knew- and that was good enough for him. Falspar happily leaned forward to hug his husband and pushed back not a moment later to kiss him. Both stood together for what seemed like an eternity before Falspar finally pulled away and gave him one of his overly cheeky smiles.

“I promise. I promise I’ll always be there for you.” He spoke, snuggly placing the band on Pyrell’s wrist. "I…love you, Pyrell, and I want to show you what that means to me.”

“……...Show me, then.” He mimicked Falspar and pressed his lips against his for a brief moment. He gently grabbed the band from the Puff's hand and proceeded to place it on the others wrist. “Take me on this journey of yours, and show me. Show me what it's like to love and trust another, Falspar. Show me this thing you call ‘love.”

With their hands now intertwined, the pair left the hillside to tell their friends of their big announcement and celebrate. In the distance, a faded figure stood- and with a bright smile and tearful eyes, she flew off. She knew their chapter together has finally come to an end. He did not need her anymore, because he finally found another to continue their journey.

Both are finally ready to move on. Drani knows Falspar will be able to be there for him now. =,)
Species © Nintendo/ HAL Laboratory
Interpreted characters created from said species © Rhylem