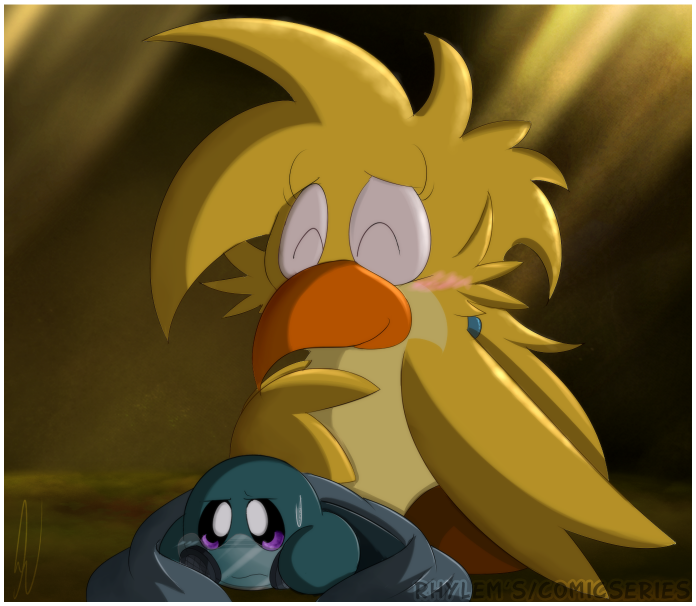 ​--
The den was quiet as everyone settled into their respectful rooms to turn in for the night. The bright yellow mother bird bid goodnight to her youngest after tucking him in, and reading one of his favorite bedtime stories. After a peck on the cheek, she quietly stepped out and made her way to the eldest of the two. She walked down the narrow hall and entered his room where he was lazily spread out in the center. With a careful foot, she made her way next to her son and placed herself next to him as she turned in for the night as well.

“Is there something wrong with that, my dear?” She lifted her wing and lightly patted his head,

“No, but…” He glanced up at her, slightly agitated, “I’m not a baby anymore."

“Of course you’re not,” She reassured, knowing Bate can get a bit huffy when he’s treated as such.

“Then go watch over Ton or something,” He curled himself with his blanket, “I don’t need you to watch over me. Nothing’s going to happen….” He softly spoke,
​​​​​​Artist Comment:

A little something for Mother's Day.

Little Bate gets fussy when he senses Suna watching over him and tells her that he's able to sleep on his own. Suna, being woken time after time by his son over the years caring for him knows his sleeping patterns a biiiiit more. Besides, it's a mother's job to protect her chicks....even if it's just from nightmares. :,D
Species © Nintendo/ HAL Laboratory
Interpreted characters created from said species © Rhylem