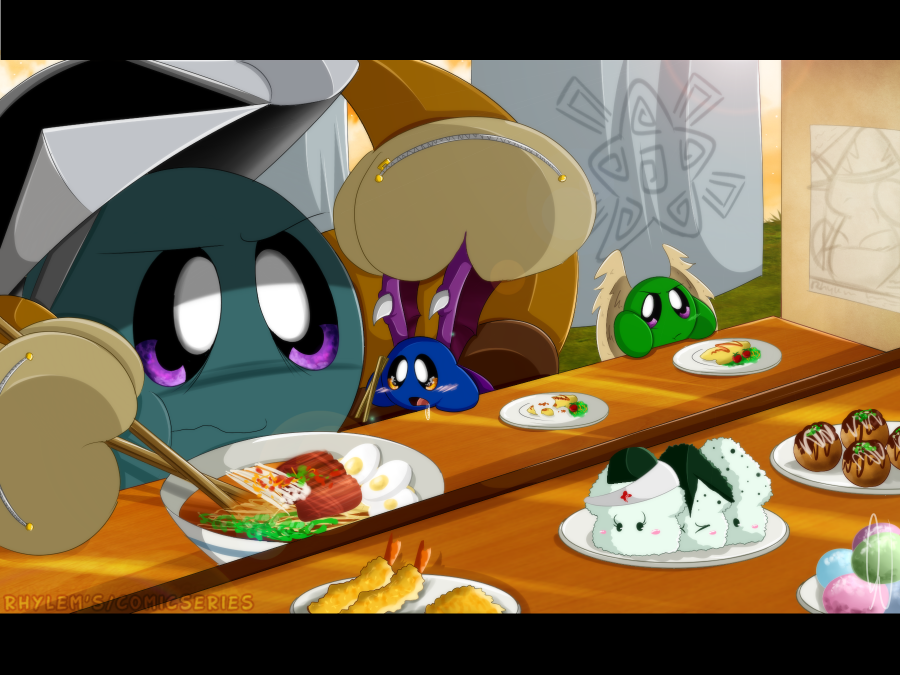 ​It was one of Bate’s all time favorite lunch spots to go to in Kalmari seeing as it was the first restaurant Ellie took him after he was released from the hospital. After all these years, Bate was glad that the small stand was still up and running. Even though his wife wasn’t there to keep him company while he enjoyed his favorite dishes, the two Star Warriors he’s taken under his care was certainly enough, he would say...

Bate motioned his chopsticks towards his mouth as he tried his best to quietly slurp the noodles from his bowl. From his side, Meta and Arthur were happily enjoying the other dishes he ordered for them. They would occasionally have a small conversation about their day, but most of the time Bate focused on his lunch while he silently listened to his two students. Halfway though his meal, however, Bate noticed one of them was getting quite close to his bowl.

Meta reached over and stretched out his chopsticks to try to steal one of his eggs. “I wanna try some!” He stated as he almost reached it. Bate lifted his hand and held on to his wings before he could get any closer.

“Finish what I bought the two of you first.” He said as Meta was STILL trying to get to his bowl.

“But Teacherrrr, you’re already gonna be finished by then!!” Meta proceeded to whine like he usually does when he doesn’t get his way. “I just want a small taste!  What if I like it and I wanna order it next time? Pleaaaaase?”

The slight chuckle from the chef watching the two caused Bate to mentally roll his eyes. Meta always had a habit of wanting to taste everything the elder bought. Half the time he doesn’t even like it and ends up spitting it out, while the other half is him taking it for his own and leaving Bate to buy another one. There was no way he was going to give him his whole bowl, so instead, he grabbed his untouched soup spoon and dipped it in the broth to get some for him.

“Don’t forget the egg and noodles too!!!” Meta quickly chimed and anxiously waited. Not wanting to start another petty argument, Bate used his chopsticks and placed a small slice of egg with a few strands of noodles on it.

“Open your mouth,” Bate instructed as he placed his other hand underneath the spoon so the broth didn't drip. Meta happily obliged, and a small blush appeared soon after once he tasted the succulent flavor of the pork broth. He nibbled on the egg and slurped down the noodles before pointing back to the bowl and looking up at his mentor.

“Hey, that’s not fair!! I wanna try some too!” Arthur started to whine and shoved Meta to get some. Both Puffs began to argue as they fought for the spoon and tried to get to the bowl.

“Enough! You two have plenty to eat, so I want you to-“

Before Bate could even finish, Arthur toppled over Meta which caused the navy puff to fall over and hit Bate’s bowl with his wing. The ramen ended up spilling all over Bate as a result, and Meta and Arthur let out a small gasp. Both quickly stopped fighting and started to frantically apologize while trying to dry off their mentor.

“Arthur, Meta....” Bate tried his best to stay calm as he now had to go back home, take a shower, AND clean and polish all of his armor again. He didn’t even eat half of his meal, and unfortunately, he probably wasn’t going to come back here with the pair for a long time. “Both of you are grounded.”  He stated as he flicked an egg slice off of his face.

Bate got up from his chair, paid what was owed and motioned the pair to follow him back home. "For the love of Nova…” He softly mumbled to himself as he wiped a few noodles off his pauldron. He never remembered anything like this happening when Ellie was around.....
-The End-