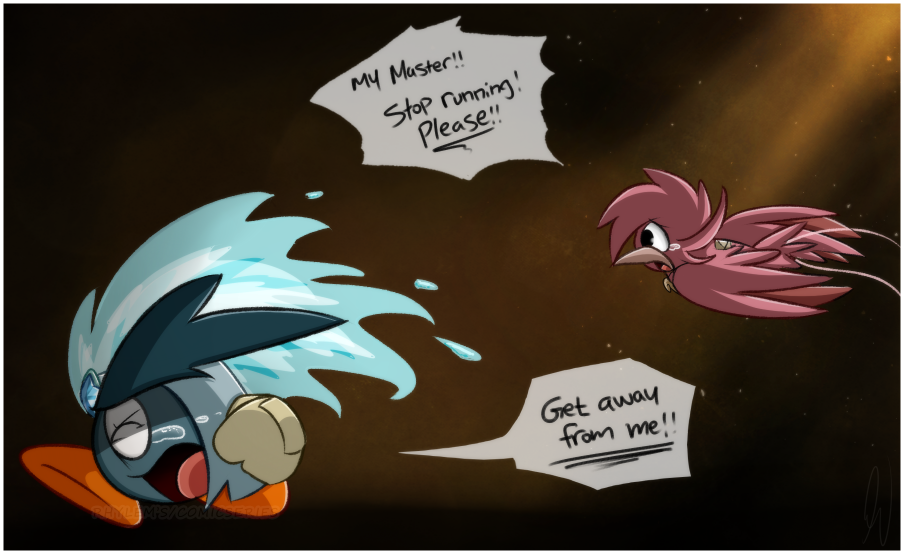 Forever by your Side

The Leo refused to listen, however. Quietly mumbling apologies to himself and to her, he continued to run away from her cries. He knew it was for the best. He knew if he got away from her, she’d be safe.

“GET AWAY FROM ME!!” He finally shouted. “LEAVE ME ALONE!”

His heart ached in pain from her tearful pleas, but he didn’t let up. Hearing her just made him run faster. Unfortunately it quickly came to a halt when he tripped over his feet and crashed to the floor below. He heard Drani cry even more, and Pyrell cursed to himself when he knew he was unable to escape her at this point.

“Master, are you okay?” She flew to his side and nudged his glove to help him up. “Why didn’t you stop when I called you?”

Pyrell sat up and looked at the salmon colored bird in front of him. He tried to fight the tears forming when he saw the wrappings on her chest. With a careful hand, he gingerly stroked the bandages.

“I did that to you….” He took a shaky breath and forced himself to continued, “I hurt you, and...I made you cry.”

“N-no! Lord Pyrell, it’s nothing!” Drani quickly brushed off his statement and smiled at the Leo before her, “Please- I’m fine! S-see? I’m smiling! Everything’s okay!”

“STOP CALLING ME THAT!” He shouted as tears started trickling down his face, “I’m not your master! I'm not your lord! I’m not your friend! I’m not anything! Just leave me alone! I DON’T NEED YOU!”

Drani watched as her master break down and gently sobbed to himself. She lifted one of her tailed and wiped a fallen tear. “I know you don’t….” She softly said, “But….I need you."

Pyrell’s heart skipped a beat from her hopeful words and ended up breaking down even more. He gripped his hands in anger and slammed one of them to the ground. He faced Drani with a mixture of pain, and confusion.


Why is she doing this?


“You don’t need me…” He strongly replied, “Nothing good ever came from you needing me, Drani.”

“How would you know?” She asked,

Pyrell just  turned away from her. “Then prove it.” He held up one finger, “One thing. Give me one thing that I did for you. Just tell me one thing I actually did that made you smile and I’ll take it all back.”

When he saw her hesitating, he figured she couldn't think of anything. "See...." He softly spoke.

“N-No, that’s not what I meant to imply,” She flew up and perched herself on his hand. “It’s just...I have so many. It’ll be hard to pick just one.”

“Many….?” He questioned, not believing her. He then started to think back, but couldn’t think of a single memory of brining her joy. There was absolutely no way she was telling the truth. He moved his hand closer and looked at her.

Drani gave a small nod and used her tail to point to him, and then to herself. “The gift of life.” She simply said, "If it weren’t for you….I wouldn’t even be here.”

She flapped her wings and few around a bit before landing on his hand again. “You gave me the opportunity to fly.”

She looked at the sky above. “And you gave me the chance to see the world we live in.”

“But…most of all…” She pointed to the star on his headpiece. “You gave me a friend to be with. I have someone, though he may not see it now, who protects me, and provides me with food and shelter. He provides me with dreams of the future, and the hopes for today.”

She chirped with joy and nuzzled the Leo in hopes he’d understand.

“I have you. Because you’re not just my master…..you’re Pyrell- My other half."

Drani felt his hand slightly trembling, and before she had the chance to get off she was caught in the embrace of a hug. She quickly calmed down from the sudden reaction and waited for him to speak.

“I’m so sorry, please forgive me for everything I’ve done....” He quietly spoke.

“It’s alright, I forgive you...” She softly replied.

“Promise you won't ever leave me.”

Upon hearing that, Pyrell closed his eyes and gave a small smile to his only friend; the only one whom he can’t live without.

This takes place after Pyrell attacked Drani that ended up giving her the scars on her chest. Pyrell doesn’t remember the incident, but felt a tremendous amount of guilt and pain for physically harming her. He thought running away from her would be for the best, but Drani refuses to lose Pyrell due to something he was unable to control.

Pyrell will never forgive himself for what he's done, but now tries extremely hard to control his anger for her. I never posted the picture (I believe it looked weird when I sketched it out) but Pyrell bites his hand to calm himself when his temper starts to rise. Sometimes it gets to the point where he draws blood, but the last thing he wants is to hurt Drani when she gets in the way to help calm him.
Species © Nintendo/ HAL Laboratory
Interpreted characters created from said species © Rhylem
Story © Rhylem