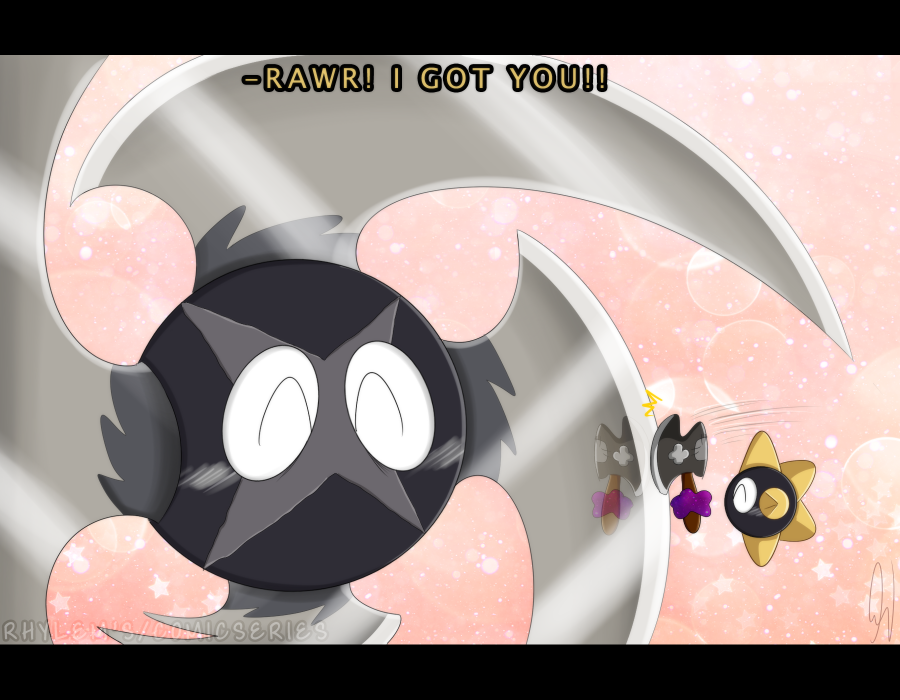 
​“Gordon!” Bullet called out as he searched for the small Gordo, “It’s time for your afternoon nap!”

When he didn’t hear anything, which is usually a bad sign, Bullet started to get frantic. The little Gordo always comes when he’s called, and not getting a response alarmed him. The Blado summoned his specter hands and started shifting through all the boxes and crates in the room where he usually plays in.

“Gordon!” Bullet called out again when he didn’t find him, “Gordon, where are you?!!”

Just then Bullet felt something hit his blade. It made a loud squeaking sound which echoed throughout the small room.

“Rawr!!! I got you!!” A voice rang as a small Gordo appeared from one of the boxes. He gripped the toy axe in his hand and started hitting Bullet again.
“Take that, demon beast!!” He shouted. “You’re no match for me, The Great Warrior Sir Gordon!!!”

Now knowing Gordon was safe all this time, the Blado smiled at his young apprentice and started to play along.
“O-ouch, you got me!” Bullet cried as the axe fiercely clashed with his blades.

Gordon let out a small giggle and continued to hit him with the stuffed toy. “You don’t stand a chance! I was trained by the greatest weaponry master in the universe!”
He swung his axe one more time and Bullet fell to the floor.

“You better believe it! And don’t think of coming back unless you wanna lose again.” Gordon set the plush down and gave a soft yawn, tired from defeating such a foe.

Bullet noticed Gordon starting to doze off and decided it was finally time for bed. He flipped over one of the empty wooden crates and snuggly placed a large pillow in it. He then gently grabbed Gordon and wrapped a small blanket around him before placing the tiny toddler in the crate.

“Night, night, Bullet.” Gordon whispered and snuggled into the pillow.
​
“Goodnight, Gordon....." He said as he headed towards the door. As he was about to leave, he suddenly stopped and glanced back at Gordon.

"Oh, wait...what I meant to say was....." He picked up the toy axe and placed it next to the young fighter.

Just a little fluff 'cause it's been quite some time since I drew Gordon bonding with Bullet. >u<​
Species © Nintendo/ HAL Laboratory
Interpreted characters created from said species © Rhylem