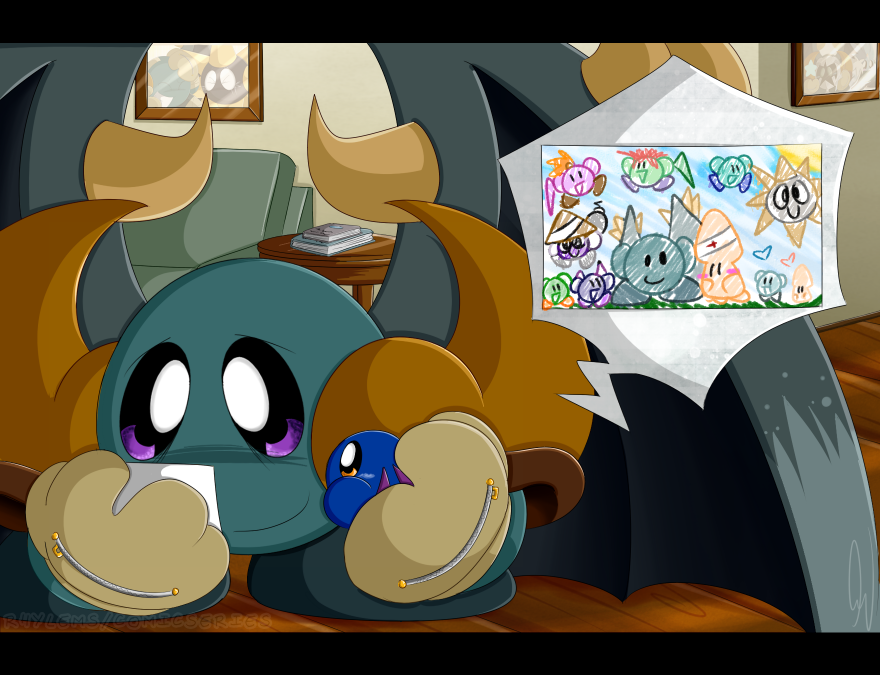 Meta quizzically asked the Squishy across from him again. He never heard of such a thing and wondered if she was making it up just to get him in buying more candy for the occasion.

“Meta, I already told you 3 times already.” Marlo giggled from across the counter and handed him the bag of sweets he purchased. "For the last time- Parent. Appreciation. Day. Haven’t you ever celebrated it before?"

She saw him shake his head.

“You could put it that way. It’s just to say thanks for all that they’ve done.” She smiled at the clueless Puff.

“So is that why you asked if I bought anything for Teacher?"

Marlo held up her hand to quiet him when she saw him fidgeting, “It’s alright if you didn’t Meta. I just thought you would since Nonsurat’s doing it for Mr. Gordon.”

“Yup!” She beamed, “He asked me to help with his gift earlier. I think I saw Dragato buy, ummm…a box cereal for Mr. Ramset a few hours back.” She spoke with much confusion as it was an odd gift to get someone.

Meta stepped back in surprise. Was everyone taking part of it? How come nobody but now informed him about this?

Marlo saw how disappointed he became and nudged his arm. Meta looked up, sadness still lingering in his eyes.

“It’s not too late, silly.” She pointed out the door. “You can still tell him."

“I know, but…..” Meta figured it would be a touchy subject. Bate tends to get really flustered when anyone mistakes one the five Puffs as his son. It results in the elder to quickly explain that he’s just their Teacher. But if everyone else was doing it, would Bate feel left out? Would his Teacher think he doesn’t care about him?

“I’ll think about it…..” He softly replied and decided he needed some time alone to think about it. He waved goodbye at his friend and headed out.

“Wait, you forgot your candy!” Marlo called out and held out his bag.

Meta, however, didn’t take it and asked her to hold it for him. For the first time, he didn’t feel like engorging himself in sweets.

Gordon, who was currently shopping in the mail plaza where Meta was at, greeted the small puff when he shyly walked up to him. Something, however, seemed off about his behavior. He wasn’t his usual chipper self, but rather much quieter and a bit more cautions. This caught his attention, and the Gordo motioned him to one of the benches so he could talk to him.

He saw Meta avoid his gaze, but give a small nod. He spoke with a soft voice to make sure no one else but Gordon heard.

Gordon knew Meta always went to him anytime he was unsure about certain things regarding Bate. He figured it was because he didn’t want to offend his teacher, so going to him first would provide a bit of security to ensure his question would be okay when he finally goes to the elder.

“Of course.” He happily nodded “What do you need to know?”

Meta was extremely hesitant as it wasn’t a typical, normal question he asks Gordon. It was something even he doesn’t talk about, but since the day was slowly chipping away, Meta knew he had to say it. Taking a deep breath to ease his nerves, he nervously looked up at Gordon and spoke with much reluctance.

Gordon blinked a few times in surprise. Now he understood why Meta was so weary about it. Even he rarely mentions Ellie to Bate in fear of hurting him. It....was a touchy subject indeed.

“Did...Bate say something to you about her?” He asked,

Even though Meta could hear how unsure Gordon’s become, he had to ask. If not, then he’ll have to wait a whole year again- and that’s something he wasn’t willing to do. Yes he was scared, and nervous and confused….but he had to know.

“I wanted to know….” He closed his eyes in fear when he said the last part, “About their family.”

Both were silent, and Meta eventually opened his eyes and saw that Gordon wasn’t facing him anymore. His heart started racing. Was he in trouble? Did he get him mad? Meta lowered his wings in fear and looked around to see if he could escape somehow.

Gordon faced him, and Meta could sense how hurt he’s become. This just added to his nervousness,

“I….wasn’t fortunate enough to meet their children, they passed away before I had the chance. I’m sorry, but I don’t think I can help you this time.”

That wasn’t the answer he had hoped for….

“But…” Gordon added, "I think talking to Bate about this particular subject would be better.” He reassured,

“But what if he gets mad?” Meta said, seeing as the whole reason he went to Gordon was because he was afraid of getting Bate angry.

“Rest assure, I promise you he won’t be angry if you ask him,"

"Meta.” Gordon hushed and lowered himself to his level, “Please trust me when I say Bate would never snap at you for asking about them. He loves his family, and it’s something that would never cause him to become hostile or angry."

His words had little effect on the Puffball, but hearing him say that did settle his nerves somewhat.

“I don’t know what you have planned, but what ever it is….” Gordon smiled at the little warrior, “I think Bate would appreciate it.”

Meta closed his eyes when Gordon proceeded to pat his head, but soon looked up to see what he had to say.

"Knowing your antics, and how much you care about Bate, you have nothing to worry about. You have a kind soul who would never intentionally hurt him, and Bate knows it as well."

Gordon perked up a bit when he finally saw Meta smile. The small warrior eventually stood up and hugged Gordon for helping him, “Thank you, Teacher Gordon.”

“Anytime,” He gave a small chuckle, “Now you better go and hurry up. Knowing Bate, sleeps probably calling his name.”

Meta gave a quick nod and hastily ran towards their home to finally confront his teacher.


“Teacherrrrr!” Meta called out once he opened the door to his home. Much time has passed, and the day was slowly coming to an end. Meta figured he would say it, though still weary.

“In the living room.” Bate responded soon after.

The little Puff ran towards the voice and saw Bate quietly reading to himself. The elder glanced down to acknowledge him before going back to his book. “Is there something you needed?”

Not knowing what to say, Meta stayed silent and just shifted back and fourth. Would just blurting it out be the best choice, or would casually bringing it up be better? At this point, he didn’t know, and he was starting to second guess himself. Would talking about this particular subject really be the best choice? Meta knew he wasn’t his son, nor does Bate ever acknowledge himself as being a father to him so…..

The Puffball shook his thoughts and looked up to see that Bate closed his book and was focusing on him. Again, Meta was silent.

“Are…you hungry?” Bate asked when Meta didn’t say anything. “I made some soup earlier in the day. I can make you a bowl.”

“Huh….are you tired?” Bate guessed again, but softly mumbled to himself after saying it. “But you may have to wait…I’m doing the sheets and I don’t think they’re dry yet. You could stay in my room if you’d like.”

Bate, at this point, scratched his head in confusion from his unusual behavior. “Do…you want to play outside?” Taking another guess. “Though the sun is starting to set….."

When he saw Meta shake his head again, the elder reached over and placed his hand over the Puff’s forehead. “Are you not feeling well?”

Meta closed his eyes and hoped he wouldn’t be mad, but instead, he felt Bate place a hand on the side of his wing. With one eye open, he looked at Bate and saw a small smile on his face.

“Thank you, Gumball.” Came his warm reply, and Meta quickly beamed from his reaction.

Bate gave a small laugh from his question, “Of course not. Why would I be mad?”

Meta nervously flinched and shook his head, not wanting to bring up the family he lost once thinking it over. “I…just…ummmm…. it’s nothing.”

Bate quickly sensed how fidgety Meta became. He had a pretty good idea what could’ve caused him to be this cautious, though he didn’t know why Meta needed to be as he’s come to terms and made peace with it. He used his wing to pick up the little Puff and placed him in his arms. With a confused, weary expression still on Meta’s face, Bate hoped what he’d say would coax him.

“You don’t need to be scared, Meta.” Bate explained, “I….know it must've been difficult to say what you just said. You didn’t want me to feel sad about my family, correct?”

“That’s very kind of you, and while it's true I had a family at one point in my life….I think it’s safe to say I have another, very routy one today.” Bate playfully tapped Meta’s forehead, “And….I’m sorry if I don’t say or acknowledge it as often to give you the sense of it."

Meta didn't respond and quickly wiggled out of his grasp. He ran out of the room only to return a few moments later. With a rather large paper in hand, Meta held it up to the elder. Bate raised a brow and gently took it from him. The crayon scribbled drawing of not only his old family, but his current one couldn't help but make Bate's heart skipped a beat. The warrior picked up the small Puff to hug him.