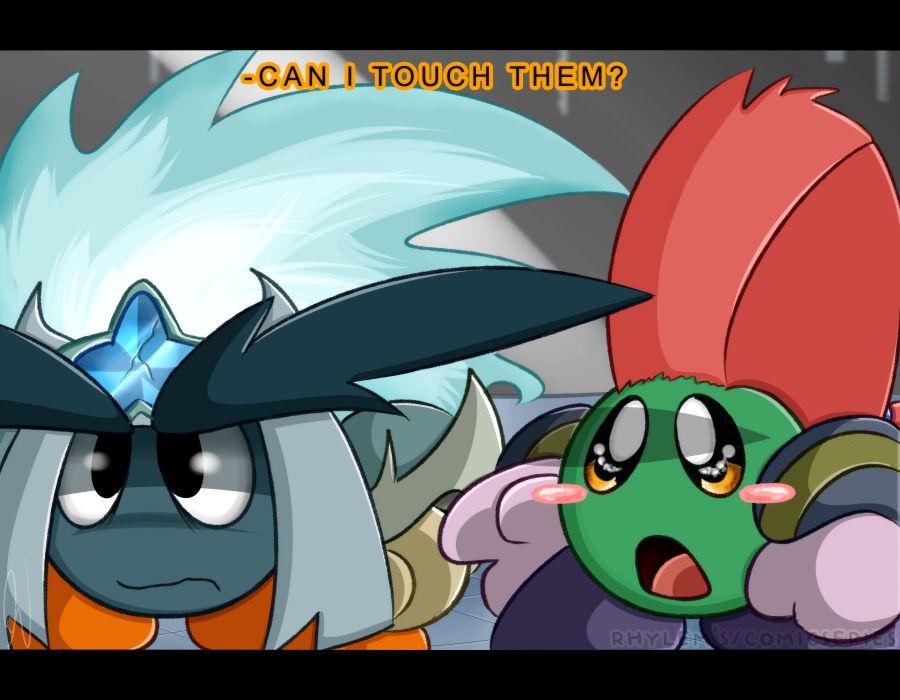 “…..Excuse me?” Pyrell’s eyes narrowed in annoyance and glared at the warrior responsible for saying it. There was no way someone could be this stupid and blatantly insult him, it was impossible! He waited for the Puffball to respond and tapped his feet impatiently.

“C'mon, those things can't be real….can I touch them?”

“W-what?!!” Pyrell gasped and slightly blushed in embarrassment when a few of the other recruits in the room started chuckling. "Hell no, get away from me!” The Leo backed up when he saw Falspar reaching out, “Who do you think you are talking to your superior like that?!!”

“B-but…” Falspar didn’t seem to care he was insulting his leader and continued to lean forward, “How do they stay up like that?”

The Leo gave out a frustrated growl and called out to the group who were trying to suppress their laughter. “DOES ANYONE KNOW WHO THIS IDIOT IS?!!"

It didn’t take long as one of Falspar’s comrades came rushing through the crowd and stood next to Falspar. He looked at Pyrell and gave a small salute. “We grew up together, yes. My name is Dragato.”

Pyrell pointed to Falspar, and then to the door. “Get him out before I break his arm.”

Dragato gave a nod and took his foolish friend before they both get in trouble or possibly injured for insulting their commander.

“Shut up!” Dragato hissed and pushed him faster out of the room.

Pyrell watched as pair left and then focused back on the group standing before him. “Does anyone else have anything to say about me?!!”

When the group didn’t respond, Pyrell gave a huff and went back to his introduction and assigning roles to the new recruits.


Drani’s quickly woke from her sleep when she heard the door to their room swing open. She saw Pyrell angrily stomp in and throw his armor on the floor.

“My Lord…” She perched herself on the small coffee table across from him. “Did....everything go well?”

“Does it look like it went well?!” He snapped and punched a nearby wall in frustration. “Some stupid idiot called me out right before I had the chance to introduce myself!”

Drani saw his anger starting to rise, so she placed one of her tails on his shoulder and softly spoke to him. “Master, please- I’m sure it wasn’t that bad."

“Wasn’t that bad?!!” He shouted, “Drani, everyone was laughing at me because of his idiotic remark! He ruined everything!”

“Shhh….” She said and rubbed his back. “Take a deep breath and calm down. You can’t let one little remark get the best of you.”

Pyrell bit his tongue to prevent him from lashing out again. He took a deep breath as instructed and slowly exhaled after a few seconds. He hung his shoulders and turned away in embarrassment, “He made fun of my eyebrows.”

“Yes, Drani,” He mumbled, “He said how huge they were, and there was no way they could be real….” He explained, “Then the freak wanted to touch them, can you believe that?!!”

“Well…” She reached out and poked one of them with her tail, “They are impressively large, my Lord,”

“You’re not helping…” He swatted her tail away.

“M-my apologies,” She frowned a bit and watched as her master fiddled with them in front of a mirror. “Do…you know who the recruit was?”

“Some nobody,” He spat, “Falparsa, or something stupid like that."

He motioned away from the mirror and sat on his bed, “Damn idiot,” He muffled into his pillow. “If I ever see him again, it’ll be too soon."

Drani flew over and stayed by his side. “Sir?”

“Drani….” He gave a tired sigh and put out his fiery hair. “Remind me to kill him tomorrow.”

“Don’t you think that’s a little extreme?” She tilted her head,

“Of course not, and why does it even matter if I do?” He let out a yawn and closed his eyes.

“It’s not like we’re ever going to be friends or anything.” He grumbled, “He means nothing to me…."

This takes place when Falspar meets his hot-headed commander. Apparently he’s more interested in his eyebrows than anything else.
Pyrell, however, doesn’t take too kindly to anyone poking fun at him….and he’s a bit sensitive about his brows. ;A;
Species © Nintendo/ HAL Laboratory
Interpreted characters created from said species © Rhylem
Story © Rhylem