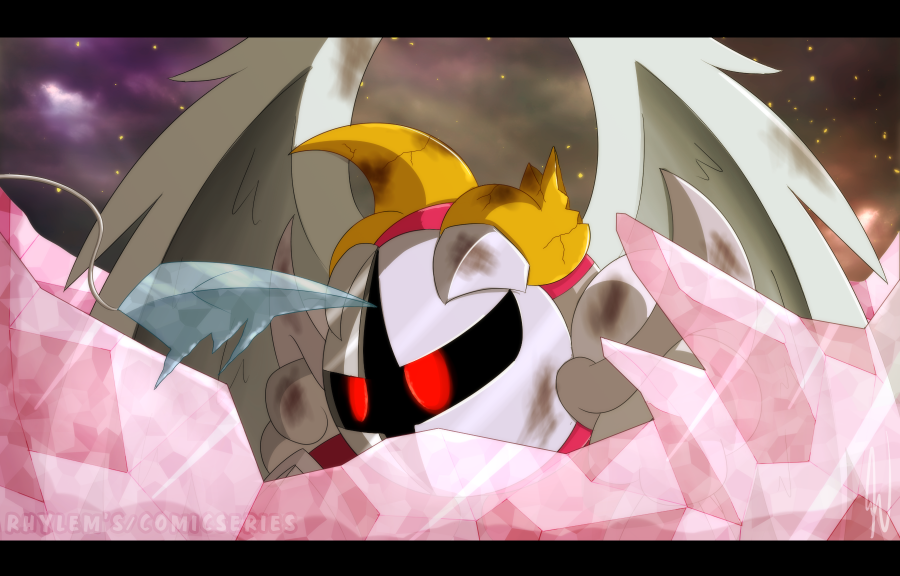 
​
"As punishment for committing the horrendous crime of taking the lives of not only your friends and family, but the innocent life of your own, faithful Guardian, these crystals I’ve bestowed upon you will forever be your eternal coffin!

I hereby strip the title that was given to you at birth; I can no longer see the loving, heartfelt Star Child I once bless all those years ago….

You….are no longer a Star Warrior"

​
The earth roared, and the sky cried. Her final words silenced the long, endeavoring battle between Warrior and Keeper.

His time was finally coming to an end.

How could he have lost against…..her?

Was she really this powerful?

How could he have not sensed it back then.

He tried once more to break free, but it was futile. With a tired sigh escaping his mouth, he finally lowered his wings in defeat. Using what remaining strength he had left, the masked figure looked up at the victor who silently stood before him.

Her face showed no trace of emotion, but he knew…..

He knew he hurt her in a way no scar or wound could ever do.

This wasn’t a victory for her…..

She lost as well.

There was no empathy in his words. He showed no regret, nor remorse.

“I’ll be back to finish what I started."

She didn’t speak a word and looked on as the crystals slowly engulfed him. He let out a low chuckle from her silence.

“You were always too kind….” His voice was finally showing the weariness of the battle, “Even after all I’ve done, you still don’t have it in you to finish me off.”

Though his vision was starting to blur and his heartbeat slowed, he could faintly see her lock eyes with him. With much pain and a heavy heart, she finally spoke,

“A bit late, don't you think?” He scoffed at her idiotic reason, “He’s been long dead for well over a decade,"

“That may be….” She quietly whispered, and turned away from him, “But at least he’ll never have to see the monster you’ve become.”
He never gave a response back, and it was then she knew it was finally over. She closed her eyes and gave a tired breath as the toll of the battle was finally getting to her.

"It is done...." She faintly says as she slowly made her way off of the rugged battlefield.

Decided to post something special for the occasion. Although major spoilers from one of my older projects, "Nova's Paradox" Just a small snippet of Gala's backstory. I’ll be posting a small portion of the plot once I finish the cover. (Which I posted somewhere in a sketch dump)

But for now, this illustration shows the last moments before Gala is sealed. This was due to him committing a very horrendous act of killing off his friends, family and even worse-  his own Guardian. (Which is a terrible, unforgivable sin in the eyes of Star Warrior, Guardian and *Keeper)

Because of this, a very powerful Keeper fought Gala and ultimately defeated him. Instead of killing him off, said Keeper sealed him so he won’t ever get the chance to hurt those who survived, and to those who died.

There are some other important things like the death of Meta and the Keeper responsible for sealing him, but as I said- this will be explained later on.

*A Keeper, in a way, are Guardians who have surpassed their title. They are extremely powerful beings who look and watch over Guardians and Star Warriors. Keepers maintain balance and peace to those who dare threaten Warriors or Guardians. The title of Keeper is extremely rare and said being must fulfill several requirements to take on the role.


*Also, please note that this Galacta Knight is based off my comic series, Gumball Warrior. Please don't compare mine to the game, or to yours.
Species © Nintendo/ HAL Laboratory
Interpreted characters created from said species © Rhylem