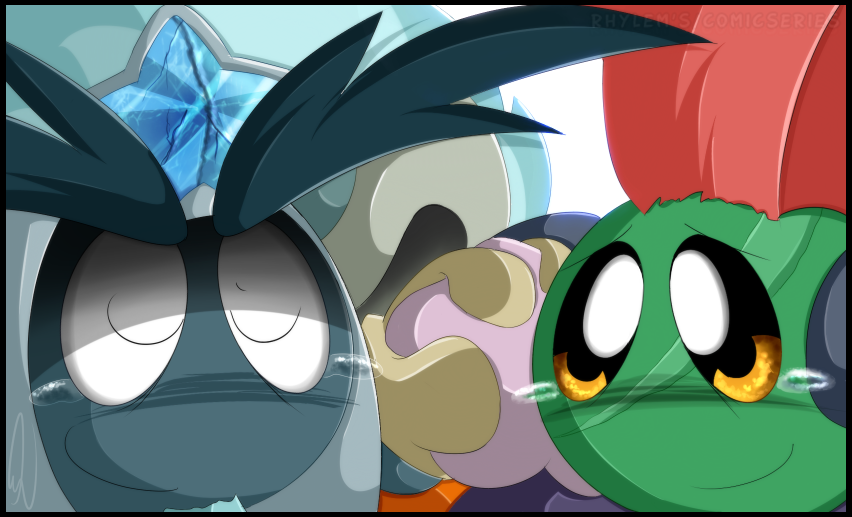 
​
Pyrell silently watched from a distance as Falspar kneeled in front of the old, preserved shrine to pay his respects. Usually this shrine is used during the celebration of New Years, but after the passing of Falspar's mentor, Pyrell had to make the trek to it almost every day. He'd patiently wait while Falspar mourned and grieved for his beloved teacher and father figure. Some days would be short- only lasting a few minutes, but then there are days where Falspar would take so long that Pyrell had to intrude and tell him that it was time to go.

While Pyrell doesn't mind being there for him, there are times where he truly misses the happy, boisterous warrior he fell in love with. His behavior completely changed after the death, and it's been taking a toll on not only Falspar, but Pyrell as well. For the past few days, however, Pyrell hasn't been by his side since he's been traveling to various locations in West Nova. Falspar never questioned it when he returned; he figured he wanted time to himself and left it at that. This time, Falspar was on his own again. Pyrell hasn't been around for several days, and he'd be lying if he said he wasn't feeling a bit lonely....

A voice quietly spoke that quickly caught his attention. Falspar turned around and saw Pyrell standing a few feet away from him. A small, weary smile formed when their eyes met, and the Leo started walking towards him.

"Did you miss me?" He spoke as he held out his hand to help the Puff up.

"What kind of question is that? Of course I did." He grasped his hand and pulled himself up. Falspar embraced the Leo since it's been almost a week he's been gone. He wanted to respect his privacy, but something told him that he was keeping something from him. "Where have you been? You normally don't disappear for this long..."

Falspar started to question how nonchalant he was being about this. Was there something else going on, something that he should know about...?

“O-oh….I understand." He stated, trying to act like it was no big deal. "I....hope your little trip was nice."

The Leo gave a small shrug at his response and motioned him away from the shrine. "How about we head back home? There's something I'd like to talk to you about."

"Something?" Falspar softly repeated and started to follow the old warrior when he noticed he already was near the steps.

Falspar's heart began to race from the silence between them. Pyrell was always the one to start a conversation to try to cheer him up. This time....he didn't speak a word. The Puff started to grow more and more anxious by each passing minute, and he decided that it was finally time to cut the tension.

"So, what did you want to talk about?" He tried his best not to sound so nervous. He really hoped to Nova he was just overreacting.

Falspar saw him slightly glance at his direction before stopping when they reached the entrance of Kalmari Forest. The Puff waited, but Pyrell never responded back. It looked like he was mulling what he was trying to say. He saw the Leo becoming slightly anxious as well, and Falspar started to step back in disbelief when he feared the worse.

Was...he going to leave him?

Was this the reason he's been leaving him from days on end? Was this the reason why he hasn't been talking to him, or trying to cheer him up lately? No, Pyrell would never to such a thing, but.....why did he seem so nervous and scared? Just what in Sweet Nova was going on??

"Falspar." Pyrell's voice shook his thoughts, and the eager warrior gave him his full attention.

The Leo noticed, and took a shaky breath before starting. "You....don't know how much it hurts me seeing you like this. I know how torn up you are about losing your teacher, and even if I didn't know him as well as you, I know for a fact he wouldn't want to see you like this. I'm sure he would want you to move on and be happy again. I'm sure it was one of the things he'd hoped you'd honor before he died. But look at you. He….would be so disappointed that you're spending your life grieving and blaming yourself."

Falspar didn't speak, but he felt tears now forming in his eyes. He was right. If Ramset saw him now, he'd be so ashamed. He's isolated himself and became a shell of his former self after the death. Maybe this was why Pyrell's been avoiding him. Maybe....this was the final straw for him.

Falspar focused on him once more when he started to speak again.

"There's still time to make up for it. There's still time for your mentor to be proud of the warrior he once raised." Pyrell continued, taking Falspar's hand in his, "I'm sorry I haven't been around much, and it’s time you knew the truth why."

The Puff's breathing hitched as he painstakingly waited for what he was finally going to say. With both of their hands intertwined, he locked his fearful, uncertain eyes with Pyrell's.

"I've been thinking that the both of us should move on from our past and…..start a new one together."

"H-huh?" Falspar could only mummer in confusion as he didn’t understand what he was talking about. Move on….?

Before he could even speak another word, Pyrell pulled something from under his pauldrons and placed it in his hand. The warrior quizzically looked at the photo, and then back at Pyrell.

"Family?" Falspar questioned before it finally hit him not a second later. "Wait, was this the reason why you’ve been away all this time?"

"Its' been....very hard finding a place to let, ah...ummm....us adopt." He stated, hesitating on the last part when he recalled being turned down in every town. "But I finally found a small shelter who would be thrilled if we could come by tomorrow."

Falspar was at a lost for words. A family? Him and Pyrell…and…..

He gazed at the photo once more-  a smile slowly, but surly forming on his face.

"Tula." His voice was faint, but it contained the affection and love that Pyrell thought he'd never hear again. The Leo took a look at the photo as well, and returned his husband’s smile.

He knew Falspar was finally ready to move on. ​
-End-

Such a dedicated husband!!!! He'd do just about anything to see his other half smile again. =,DDD
Species © Nintendo/ HAL Laboratory
Interpreted characters created from said species © Rhylem