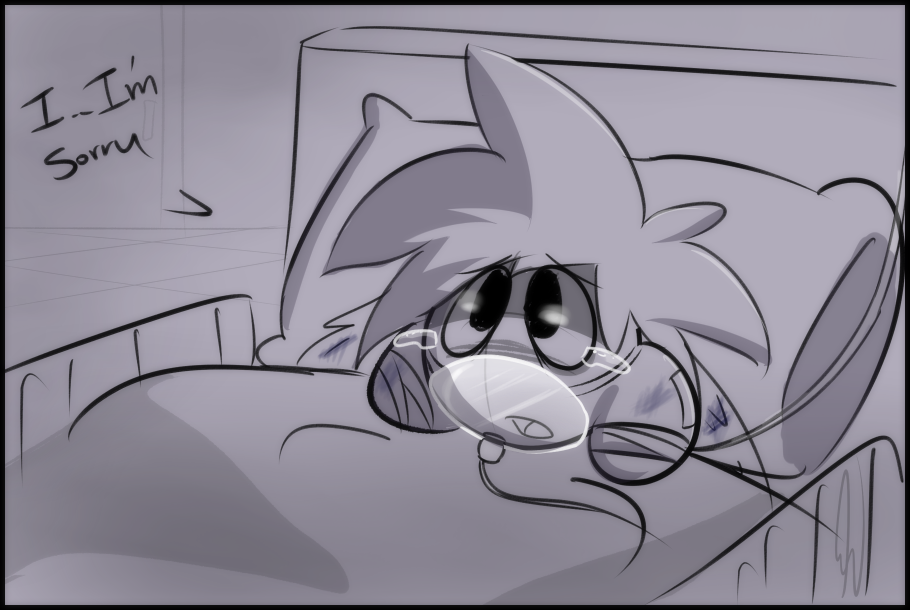 ​Atticus gave a soft whine of protest when something cold was placed against his back.

“Arthur, don’t say that. You couldn’t possibly have known something like this would happen.”

“I know, but look what it caused! He could’ve died if Teacher Bate wasn’t there to stop him."

His wing slightly twitched when he heard the voice of his parents. They sounded…..sad.

“Tone your voice down, I already told you that your son will make a full recovery by the end of the week. Getting worked up will just cause more stress on the boy. And Nova knows we can’t have him crying when his throat is this burned.”

“I never though my past would follow me back to Kalmari….with a vengeance for blood, apparently. I….I mean, what if someone else tries to target us? Or ever worse- Atticus again. He doesn’t know how to fight, let alone defend himself w-what are we going to do?"


“M-Momma….” Atticus managed to say, but his throat greatly burned in the process. He cried out in pain, and both parents turned their attention to him.

Both dashed over to tend to their son.  “Oh- Sweet Nova, I’m so glad you’re okay.” Arthur said as his tense features let up when his son finally woke. Atticus was about to speak, but was silenced by Petta.

“Wait until you take your medicine, dear. Your throat is badly inflamed from using your fire.”

Atticus just shook his head in response. Arthur lightly chuckled and helped him sit up while Petta poured the purple colored liquid into a cup for him. “You’ll feel much better than before, promise.” He reassured and unstrapped the oxygen mask he was wearing.

The Leo gave a small whine. He already took it this morning- there was no reason he needed to take it again, though…he can't argue that his throat really was hurting. Maybe...just this once. He slightly puffed up his cheeks in annoyance when the cup was handed to him. He closed his eyes and quickly downed the syrup, coughing a few times for the horrid taste of it partly being made of the extremely bitter Pacto Snapper.

“Heh, takes his medicine better than a certain warrior I know...” Mends mused and headed to the door to take his leave since his patient was doing well . Besides, he figured the trio needed some time by themselves to discuss the crucial topic on their hands. “I’ll be back to check on you tomorrow,” He said and shut the door,


Atticus felt the burning sensation in his throat fade away after a few minutes. Arthur took notice and gave him a smile, "Better?”

“You must’ve really used your fire. Doctor said your burns are quite severe.”

Atticus lowered his eyes and started to nervously fiddle with the iv in his arm. He hoped that wasn’t the case. He didn’t think using it would cause that much damage. He….had no other choice, though. He had to use it! It was the only way to protect him and……

Arthur noticed Atticus' eyes were starting to fill up with tears after he said that. A huge wave of guilt started to take over, and the elder reached over to gently nuzzle him. “Shhhhh….calm down. You’re fine now. Everything’s going to be okay.”

“N-no it’s not….” He said, wiping a few of his tears away. He looked over at his mother and spoke with much pain and hurt, “I….I’m sorry.”

“Oh, Atti, you have nothing to be sorry about.” Petta reached over and nuzzled him as well,

“B-but your plants. T-they’re hurt…..” He started to cry after recalling the events. He failed to protect them, and now his patch of precious flowers were completely destroyed. “All the them are s-smashed and crushed. I couldn’t save them….it…it’s all my fault.”

Arthur started to tense up again from his son’s response. He…..was apologizing to them? Was he really bearing all responsibility for an incident that had absolutely nothing to do with him? Anger started to rise from the Buggzy responsible for causing it, and Arthur’s harsh features started to return.

“Arthur,” Petta called out when he saw him starting to clench the hand rail of the bed in anger. She knew he was frustrated by this whole ordeal, but she didn’t want Attius to think he was getting mad at him. The Leo placed a hand on his shoulder and motioned him to the door. “Why don’t you go out and take a walk. I…think I should have a talk with Atticus alone.”

“You’re tense.” She stated, not bothering to sugar coat it, “I know you’re mad at yourself, but right now our son is the one who needs to be comforted. Take a few minutes to clear your head and come back when you’re feeling better.”

The elder just gave a small sigh and nodded. There was no way he could argue when she was in her protective mother mode. Petta was much better at keeping her emotions in check when it came to dealing with this sort of thing. She was right….maybe he did need to cool off.

“O-okay.”  He agreed and walked out. Petta shut the door once he left and took a seat next to the little Leo.

“Is….daddy angry at me?” He sniffled some more when he sensed how mad his father was after he mentioned the flowers. Was he ashamed that he wasn't able to save them? “I….I tried my best to protect them, honest!"

“Oh, Atticus,” She hushed and reached over to brush back his hair. “I know you tried your hardest. You did all you could, and both of us couldn’t be prouder."

“But-“ He tried to speak but Petta lightly tapped his mask to hush him. He kept quiet and looked up as Petta gave him a warm smile.

“There is no need to apologize, my dear, ” Her voice contained no trace of anger as she spoke, “My plants are special, yes, but I’d give it all up in a heartbeat if it means it’ll keep you safe.

“R-really?” He asked, quite surprised. Her mother had those plants before he was even born. Would she really do such a thing?

“Of course,” She lightly giggled and continued to stroke his hair, “Your father and I would do anything in the world to make sure you’re okay. That’s why he was acting the way he was earlier. He wasn’t able to protect you when you needed him the most. He was afraid that we were going to lose you.”
​​​​​​Artist Comment: