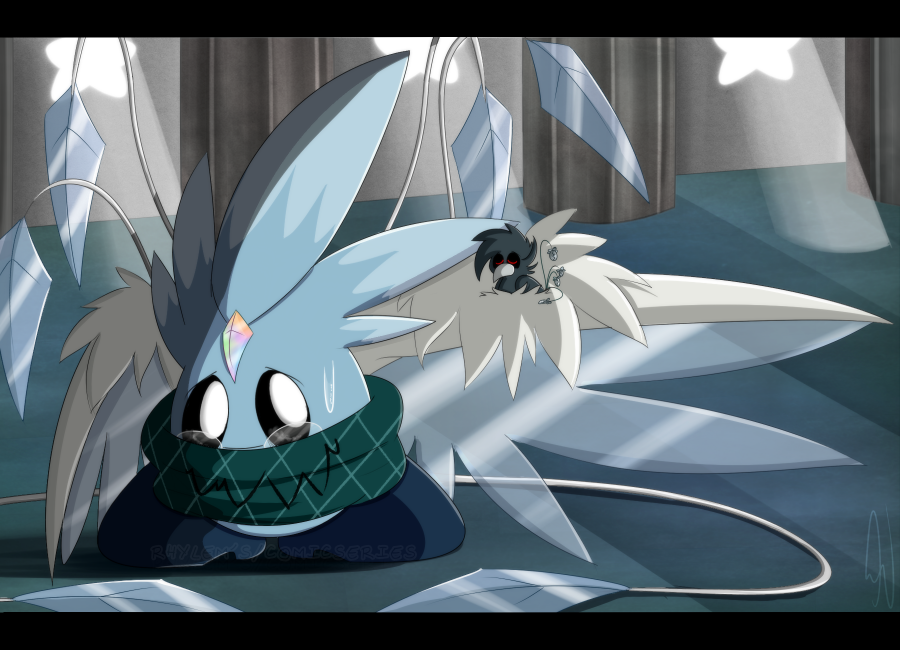 Atka kept a careful eye on the newborn Guardians who were finally dozing off after a long day of exploring the large, semi-abandoned Star Warrior temple. The little birds, now nestled in the small nest Atka made, settled down and ruffled their feathers before slipping into their afternoon slumber……except for one.

Tears were now streaming down the baby bird’s face when he saw Atka leaving, and he quickly ran to the elder Sphere Doomer to stop her. Atka took notice when she saw him clutching onto her for dear life, and she gave a small smile to comfort the scared Guardian.

“Dear sweet, little Ekon-“ She softly spoke and picked him up with her tail. “I was just going to grab my book,”

She was responded by loud cries of hectic cheeps and babbles. He slid off her tail and tried his best to burrow into the folds of her scarf. Atka, however, grabbed him again and slowly cradled the terrified chick.

“Don’t you want to sleep with the others?” She walked towards the sleeping bunch, “I’m sure it’ll be much more comfortable compared to my scarf.”

Ekon started to fidget and hastily flapped his wings in protest. “Cheep, cheep, cheeeeeeep!!!” He jumped from her tail and managed to make it all the way to the Doomer’s Wings. He was quite surprised how fluffy and plush they were, so he snuggled into the tuft of white fur and finally settled down.

Atka, for the sake of not having the others wake from his little fit, stood perfectly still and allowed the small Guardian to rest. The old Doomer could only laugh at the scene that was unraveling before her.

“Oh, my dear Bate,” She quietly spoke to herself, “I could only imagine what you’re going through with their other halves."
​​​​​​Artist Comment:


​Ekon’s the baby of the group when they were toddlers. A bit of a momma’s boy who will stick to Atka like glue. He tends to sleep in the little patch of fur on her wings when he’s tired. x)
Species © Nintendo/ HAL Laboratory
Interpreted characters created from said species © Rhylem