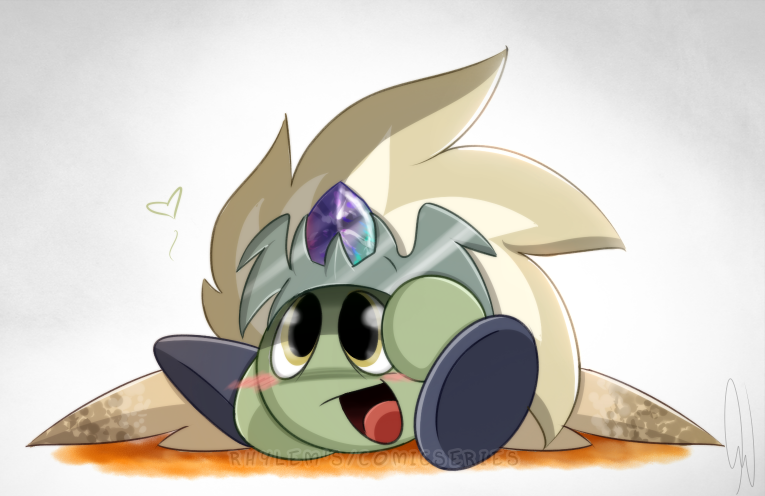 A Gift Fit for a Leo
Sir Bate / Atticus

​​
Once opening the door, a warm smile showed on Arthur’s face when he saw his old flight instructor on the other side. In his hand, a small, brightly colored gift.

“Always count on my teacher to never break a promise,” Arthur said as he moved aside to let him in.

His mentor was away visiting Kirby and Meta in Pop Star for a few weeks since the pair was unable to make it to Kalmari this time around. When Arthur called informing Bate of a very…special request he had for his son’s upcoming birthday, Bate promised he’d be back in time, and with the gift Arthur requested. He knew Bate arrived late last night and probably had little to no sleep. He hoped he wasn’t asking too much of him….

“I’m sorry for putting such an important task on your shoulders. I hope it didn’t cause too much difficulty….” A slight ping of guilt lingered in his voice when he recalled asking him at the very last moment.

“As someone who made masks throughout his whole adolescence, something like this was a breeze to make. Think nothing of it,” Bate waved it off,  “I just hope he likes the design.”

Arthur tried to suppress a fit of laughter when he said that, “If it’s coming from you, I’m pretty sure he’ll love it; regardless of design."

“Hm, that's reassuring to know." Bate shyly nodded and looked around for the Leo in question, “So, where's little warrior wandering about now?”

Before Arthur could answer, Petta entered the room with a concern frown. It quickly let up when he spotted Bate, and the Leo went over to greet him,

“O-oh, Mr. Bate! I’m so glad you were able to make it in time. Atticus is in his room,” She said when she spotted the gift in hand,  “Though…he is recovering from a slight fever at the moment.”

Arthur saw his mentor tense up in concern, so he reached over and placed a hand on his back, “Nothing major, rest assured. It finally broke in the early morning, and he’s doing much, much better. He’s just quite exhausted from it all, but I’m sure seeing you will greatly brighten up his day.”

“Are….you sure?” Bate hesitated, not wanting to disturb him if he’s ill. Nova knows he always hated to be woken while he was recovering. “I can come back when he’s feeling better,”

Petta shook her head and lightly nudge him to the hallway, “Oh, little Atti’s been absolutely heartbroken since the fever. He’s been cooped up in bed the entire time, and was starting to fear he wouldn’t have any visitors on his special day. I know it’ll mean the world to him if he’s able to see you. Atti was actually telling Arthur this morning that he'd hoped you’d come and visit him, so…..”

“Hm, of course,” Bate obliged, knowing he couldn’t refuse such a sweet request,  “I guess a small visit couldn’t hurt."

“Thank you, Teacher Bate,” Arthur said, knowing the elder was one of the few who Atticus admires, “If anyone can brighten his mood, I’m positive it’s you,”


Bate lightly knocked on his door before slowly opening and letting himself in. There he saw the little Leo resting, but once he heard the door click, the whole atmosphere quickly changed. Bate couldn’t help but smile from the sheer amount of bliss the small warrior was radiating from having a visitor.

“OUJIIII!!!" Atticus gasped in excitement when he saw his grandfather and tried his best to get out of bed. "You’re back from Pop Star!!!”"

Bate saw his struggle of wiggling out of his blankets, so walked over to prevent him from tuckering himself out.

“I am, I am….It’s nice to see you too, Atticus,” He greeted and placed the gift in front of him, “A little birdie informed me it was your birthday. Seeing as you had a few rough days, I hope this makes your day a bit better."

Bate didn’t think his grandson could be any happier, but boy was he wrong. The Leo happily bounced and clapped his hands when he saw the gift. He picked it up and looked back at Bate with glossy eyes, “Waaaaw! I even get a gift!!! Y-you're the greatest!!"

A small blush formed on his face, and the elder watched as he started to rip open his gift.

To Atticus’ surprise, he pulled out what seemed to be a headpiece similar to what his mother always wears. He gently inspected the accessory, and looked back up when Bate started speaking,

“Your mother and father gave me the great honor of letting me make this for you. They informed me that every Leo receives one when they reach the age of 1,000.."

“You made this? R-really?!” He said, extremely impressed that he was able to create such a thing, “T-that's so cool!"

“Ah, thank you,” He sheepishly responded when his work was praised, “I hope it’s to your liking,”

The little Puff spent no time eagerly placing the piece on his head. He shuffled his bangs a bit until it was finally snug tightly around, and faced the elder once he was done, “D-does it look good?”

Bate gave a light chuckle and gave his approval, “Quite so. Elegant like your mother, but fierce like your father,”

“W-whaa-really?!!!” He cheeped in happiness and pointed to the hand mirror across his room. Bate pushed himself up and walked over to the counter to fetch it for him. When he handed it over to Atticus, he could’ve sworn he heard a slight squeal when he saw his reflection.

“Mommy, daddy!!” Atti called out the best he could, trying his best to ignore his sore throat. Both parents came rushing in not a moment too soon. When the pair saw the headpiece perched on their son’s head, both couldn’t help but gasp in awe.

“Oh- it’s absolutely gorgeous,” Petta’s eyes softened at the sight of his son, “What a marvelous piece, and such a lovely gem you chose.”

“It’s quite special,” Bate said as he got up to join the pair, “It’s extremely sensitive to its surroundings and changes colors depending on the temperature. I thought it may come in handy…"

“Leave it to Teacher Bate to surprise us even more,” Arthur walked forward and eyed the unique gem, “And I thought you going a whole day without taking a nap was impressive. This is on a whole different level.” He teased,

Bate playfully rolled his eyes and resisted the urge to slap him. He shifted his gaze over at the Leo, and noticed he was starting to tire out. It was then he decided that it was finally time to bid farewell and let him rest.

“Well, I should be heading out now,” He walked over to Atticus to say goodbye, “I got a lot of work to finish back at home,"

“Awwwww, already?” He frowned, letting out a small yawn as he sat up more to hug him, “Can’t you stay just a little bit longer….?"

“Maybe next time,” He hugged him back, “Besides, I think you should go and rest up for the evening. You don’t want to be tired when more visitors arrive, right?”

Atticus beamed at the very thought of it and gave a nod. Arthur and Petta tucked him back in bed, and placed the newly crafted headpiece on his nightstand. “Goodnight, Atti,” Both said and placed a kiss on his forehead.

“Night- night,” He then looked over at the elder. With a small wave, he softly thanked Bate for the gift one last time before snuggling in his pillow.

“Bye-bye, Oujiiii….” He softly mumbled, letting out another yawn,

“Sweet dreams, Atticus,” Bate smiled as he made his way to the exit. Arthur clicked the door shut once Bate was out, and all three made their way back into the living room.

“Well, Oujiiiiii~,” Arthur mused and faced his teacher. He gave a much relieved sigh and smiled brightly at his mentor, “Thank you,” Was all he was able to say. No amount of words could truly express his gratitude. His teacher….truly was something special.

“You must be quite exhausted yourself…” Petta spoke when she noticed his wings were starting to slouch. Arthur saw and gave a small frown,

“T-teacher, I’m so sorry for putting you through all this.”  He apologized as he started to feel guilty again, “I know how busy you probably were once you got home…."

“If it made him happy, then pulling an all-nighter was surly worth it. Please don’t worry yourself over me, alright?"  He said, giving tired yawn as he recalled his long, busy schedule of not only spending equal time with his students, but his grandkids as well. It was tiring, he’d say at times, but something he’d never exchange for the world. He’d always recall the point in his life where he was all alone, constantly craving for the love and appreciation of a family, and now…..

Bate gave a warm smile when he saw the worrisome pair still fretting over him. Oh, how times change. He gently placed a hand on their shoulders, and with much appreciation in his voice-

This story takes place on Atticus' 1,000th birthday. Bate (after being asked by Arthur) designed him the traditional headpiece all Leos wear. He found a special stone that changes colors depending on temperature, so his parents would monitor how he's feeling. x)
Species © Nintendo/ HAL Laboratory
Interpreted characters created from said species © Rhylem