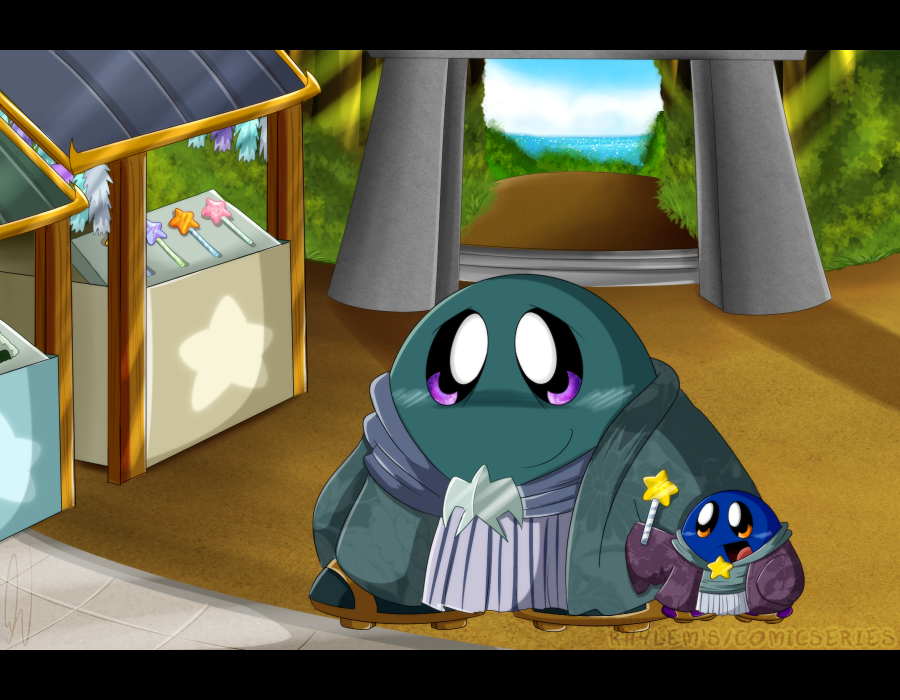 ​A Day of Remembrance and Celebration
Sir Bate / Meta
​
​​
"Thank you, Teacherrrr!” Meta squeaked as he held the toy Star Rod and waved it in the air a bit. “Now can we get something to eat?”

Meta eyed all the vendor stands selling various types of delicious food and sweet treats for the new year. He looked up at the elder and eagerly tugged on his outfit while pointing to one of the stands. “Let’s go to that one!"


“We’ll get something to eat after, Gumball,” Bate said as he focused his attention to the old, preserved shrine past all the celebratory stands, “First we must pay our respects.”

Bate gave a small chuckle and started to make his way to the shrine, Meta close by his side.

“To our loved ones who passed on from the world. To those who gave their lives to keep us safe in the brutal midst of war. And to our great founder and his respective Guardian for giving us a home to call our own."

Bate pulled out a small charm from inside his sleeve and placed it in Meta’s hand.

“Do you not have someone you lost this year? Don’t you want to pay your respects to her before the year ends?” Bate lightly nudged Meta to the shrine where many charms and amulets where scattered around the large memorial statue in the center.

Meta stared at the charm in his hand, and in greater inspection saw it was shaped like a bird. Small tears formed in his eyes, and the little warrior gently placed the charm with the others.

“Melody….” He softly said and used his sleeve to wipe the fallen tears.

Bate watched as Meta slowly bowed and made his way back to him. The elder gave a light pat on the Puff’s head and walked up to the shrine to pay his own respects.

Meta stood by and waited as Bate placed his charm next to his and kneeled down to pray. He quietly watched as his teacher closed his eyes and cupped his hands together. He knew his teacher lost many in his life, and how important this must be for him. After a few silent minutes, Bate got back up, bowed, and went towards Meta.

“Alright," The elder slightly smiled at his student and motioned him to the exit. Meta saw that he wasn’t the only one who started to cry, but figured this wasn't the proper time nor place to badger him about it. Instead, he smiled back at Bate and trotted down the stairs to celebrate all the festivities.
​

Bate and Meta dress up in proper attire to celebrate the new year; after paying proper respects of their loved ones who have passed on, of course. Although later in the afternoon they'll have to follow Kalmari's other tradition with the markings.

Those two cuties have been through so much over the past year. I wonder what this year will have in store for them? x)
​
Species © Nintendo/ HAL Laboratory
Interpreted characters created from said species © Rhylem
Story © Rhylem