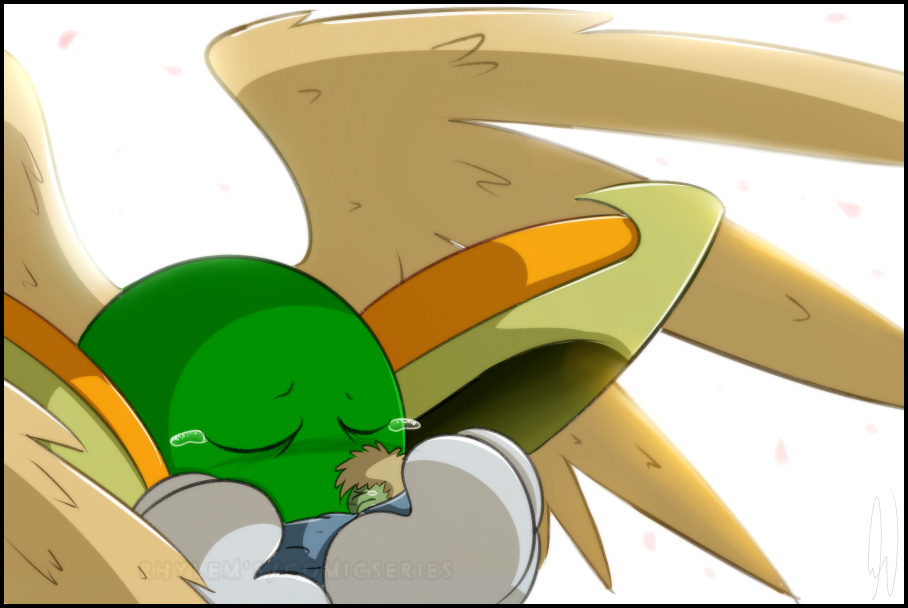 
​
“Arthur…...Arthur, look at me,” Petta called out to the distraught warrior.

With tired, dull eyes, he finally looked up to face her. He watched as she set down the vile of medication she finished making, and grabbed both his hands. The pair stood silent, and with much hesitation, Petta finally spoke,

“Arthur,” She paused to gather herself before forcing the last words from her mouth, “If…t-this doesn’t work-“

“Don’t say that,” He quickly cut in, his voice starting to tremble, “Don’t you dare say that! It WILL work.”

With tears now forming in her eyes, and a quiet, cracked voice from hearing her husband's hopeful words- she continued,

“Arthur…..” She repeated before he interrupted, “We d-did everything w-we could….”

“And we’ll keep trying if this doesn’t work!” He snapped back, “I won’t stop looking! I’ll never stop searching!”

His voice hitched when Petta wiped the tears streaming down his cheek, “I know, dear….” She said, “I know you’ll scatter the whole universe just to find a cure, but….”

The Leo looked at the crib behind her, “He….can only fight for so long. T-time is running out...”

The Warriors’ knees started to buckle when he heard her say that, and with a heavy heart from the realization that this was their last opportunity to save their son, Arthur collapsed and started to cry.

This can’t be happening. Not to him- not to his only son.

Though Arthur was known as a fearless fighter and respectable leader of the GSA, no amount of demons or monsters he’s fought over the years had prepared him for this. He has never felt so helpless in his entire life up until this point. He promised he’d protect him. He swore he’d be the best father there was….

Why? Why did this have to happen to him?

This was supposed to be a happy moment to celebrate their new family, but instead….

“I’m not s-strong enough….” He wiped his tears and eventually looked up again, “We just started our family….I…I don’t think I can handle the thought of knowing that I may have to bury my own son because I didn’t try hard enough..."

Petta watched as he broke down and hugged his body with his wings. As he was quietly sobbing to himself, the Leo walked over and embraced the broken warrior in a hug. Arthur didn’t speak, but lifted his shaky hand to hold her as well. Both kept silent, and cried at the thought of losing their child.

Both parents knew this was their final chance……


Petta was the first of the two to enter his room. She walked up to the crib and gingerly lifted the frail infant; Arthur quietly watching from behind as she started to softly speak to him,

“My sweet, dear Atticus,” She gently kissed his forehead and warmly smiled at him, “You’re the son of the most stubborn, hardheaded warrior in existence. I know for a fact you’ve adopted that trait from him, so prove everyone wrong and show them you’re a fighter. You’ve been so strong up to this point- please bear with it a bit longer….it’ll all be over soon enough. Your father and I will be patiently waiting when you wake up, alright?

With one final kiss, Petta placed their son in Arthur's arms. The warrior was trembling when he saw the little Leo unconscious and limp in his hands, and he looked up at Petta who gave him a reassuring nod to talk to him,

“M-m….my s-s….son,” He closed his eyes and brushed his lips against his bright beige locks.

Once he made contact, the world around him seemed to stop. His surroundings were not of a cold, dark room but of something warm and bright. It welcomed him with open arms, and Arthur felt himself greatly relax. He was not scared nor frightened like before; He felt….like everything was going to be okay. He didn’t feel himself choking up like when he first began, so with his newfound voice Arthur cradled the little Leo and finally spoke what he couldn’t before.

“You have been through so much over the past month, and for that, I am truly sorry. Not even I have dealt with such endeavors like the ones you’ve been going through; You can’t even walk, nor can you talk or open your eyes, but here you are- still fighting your absolute hardest for us. As your father, I couldn’t be prouder of the fighting spirit you possess. You truly have the heart of a Star Warrior, my brave, courages Atticus. Your mother and I love you with all of our heart- and we will do anything in the world to make sure you’re happy and safe. Please don’t ever forget that….."

Arthur opened his eyes, and Petta was quite shocked to see that he was smiling,

“C’mon-“ He spoke and looked at the elixir in her hand, “We didn’t travel the four lands of Nova just to keep our son waiting…."

Petta didn’t know what suddenly caused her husbands sudden mood change, but something about it made her believe that maybe…...he knew something she didn’t.

“Of course….” A small smile starting to form on her face as she began to walk to the pair. She eyed the little Leo in his arms before looking up at her husband when he brushed his wing against her side,

“Together, then?” He firmly gripped the bottle as well,

OF COURSE I had to draw a feels scene. It wouldn’t be part of the Gumball Warrior series if it didn’t have a feels scene!

This takes place a few weeks after Atti was born. He fell extremely ill during this time for the reasons that he is, in fact, a hybrid. (**Hybrids are quite rare, and if born- usually have many, serious health issues as a result.) Atticus is both a Leo, and a Puffball. Because of this, his Puffball side is unable to handle the scorching, unbearable temperatures typical Leos have. While his Puffball side was trying to remedy said issue by cooling down his body, his Leo side was now deteriorating because their species MUST be kept a certain temperature or else they’ll die. He stayed at the hospital and went through multiple tests, but in the end….nothing was able to help. Mends informed them with a heavy heart that because of this extremely rare mutation with no known cure, their son was not going to make it.

Both parents were crushed and searched nonstop for a cure once they heard that. They traveled the 4 lands of Nova in hopes to find something. (Arthur assigned Ekon to watch over their child until they returned) They first went to South Nova where Atka generously provided a book written by one of the legendary three. In it- an elixir that may possibly cure the issue Atticus was suffering from. A plethora of ingredients of rare plants and herbs were needed, and Arthur and Petta were determined to find them all for their son.

When all plants were obtained, Petta went straight to work to make the elixir. In the mean time, Arthur was watching over their ill infant until she was ready. Much time has passed since the deterioration, and both knew that this was their last, and final chance to save him. Of course, the book being centuries old, Arthur and Petta did have their doubts. They were not ready to lose their son, but remained hopeful once both spoke to him before administering the medication.


Arthur and Petta, the two most dedicated parents in the universe, couldn’t be happier that their one and only son survived such a cruel, unfortunate illness. Mends considers it an absolute medical miracle that Atticus was able to pull it off. Because of this, he started taking up hybrid studies JUST incase something like this ever happens again.

Of course, still being a hybrid, Atti suffers from multiple health issues that need to be monitored on a daily basis. He is a slight mirror of Bate; his endurance is very bad, and he’s unable to do much without getting constantly tired. Although it won’t kill him so easily like before, he does need to watch his body temperature, as he can fall ill until it’s regulated again. He has a very weak immune system, and has a hard time fighting off colds. Atti must also stay inside during the rainy and snowy seasons, if possible. (Or just wear a very thick coat to make sure his temp doesn’t fall below a certain level) The same goes if his temp is too high as his organs will start to shut down as a result. (Minor cases are inflammation, and requires medication to ease the symptoms.) Atti makes sure to take very good care of himself, and with both his parents keeping an eye out, there is rarely an incident.


UMMMMM….I think that’s all I have for now. I do think hybrids have some sort of backlash since they are two different species trying to co-exist. I honestly think said mutations are a huge endeavor one must endure- it’s quite dangerous and one may even die if the species are too polar.
Species © Nintendo/ HAL Laboratory
Interpreted characters created from said species © Rhylem