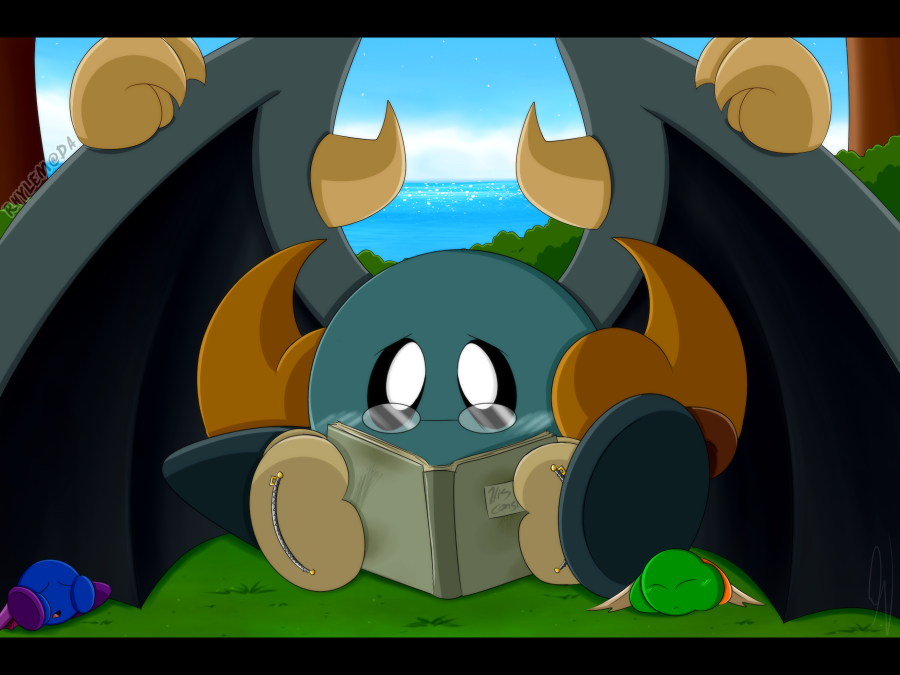 ​"I, who created the stars at night, will guide you though-"

"Teacher, teacher teacher!!!! What are you reading?"

Bate stopped mid sentence and looked up to see two Puffballs standing in front of him. He slightly glanced at the page he was on before setting the worn book next to him. He removed his reading glasses and placed them on top of the book before responding.

"It's just something my friend gave to me when I was younger."  He explained. "Actually, I believe it was the first book she published."

"Really?!!" Meta sat in front of him and continued to ask more questions.

"How many pages are there?"

The tiny Puffball stopped talking when he felt something hit him on the back of his head. He looked back and saw Arthur retract his wing. The green Puff walked forward and glared at him.

"Stop talking! Do you even realize how annoying you sound?"

"H-hey! I'm not annoying!! Teacher, did you see him hit me?!! Make him run laps for that!" The little warrior demanded.

"I didn't do anything! He was annoying you, right Teacher Bate?" Arthur defended himself.

Bate sighed at their typical, repetitive behavior. Even on his day off, he still has to deal with their constant bickering. The elder grabbed his items and stood up, threatening to leave. The pair stopped yelling and looked at him.

"It's my day off, and I prefer not to spend it with you two shouting while I'm trying to relax!"

The pair flinched from his scolding and softly mumbled an apology.

"We just wanted to see if you could swim with us." Meta said, "We were gonna go to the beach and we thought you'd want to come with us."

"I told you I'm unable to swim the past 15 times in the past, so what makes you think today would be any different?" Bate said as he sat back down.

The elder shook his head and reached for his book. "Thank you for asking, but I would really like to spend today reading if you don't mind."

Arthur looked at the book his was holding and noticed how old it was. "But Teacher Bate, it looks like you've read it plenty of times."

Meta noticed how old it was as well and agreed with Arthur. "Yeah, you could read it later. You've already read it a ton of times, so who cares!"

Bate opened the page he bookmarked and placed his glasses back on.

"I could...but then again, I never get tired of reading this particular story. There are some things in life where you could do the same thing over and over again, and never get bored doing so. In my case, it's reading."

"Huh? Is the story that good?" Meta asked.

"Hmmm...to me it is. Though I'd say you're bit too young to appreciate such a piece." He said as he continued to focus on his book.

"Hm?" Meta glanced at the front of the book and tried to make out the title. "His....fi-al...C...ste....tion,"The tiny warrior said out loud. Bate, fixated on his book, didn't bother looking up, but corrected him.

"It's called 'His Final Constellation.'"

"Oh..." Meta crawled next to Bate and peered at the pages, slightly crunching it. "There's no pictures in it. How could you even understand what's going on?"

Bate grabbed Meta and set him down without saying a word. Meta crossed his arms and looked away when he found out Bate was giving him the cold shoulder.

"Fine...it sounds like a boring book anyways."He started to walk away, "C'mon, Arthur."

Arthur walked a few steps away from the elder but stopped. Unlike Meta, he was quite interested after hearing the title. He decided in the end that he would rather stay with Bate than play.

Arthur knew his teacher never liked to be disturbed, but if Meta could do it without being scolded, then it should work for him too. The Puffball mimicked Meta's movements earlier and peered at the pages of the book. He couldn't understand the writing after observing it, so he decided to ask instead.

"It doesn't sound boring to me...do you, ummm...think you could read it out loud so I can understand it?"

Bate stopped reading and looked at the little Puff.

"Really?" He questioned. "That's not like you to sit idly while you could be training."

Arthur shrugged. "I feel like doing something different today....ummm, if you don't mind."

Bate slightly smiled and flipped the book to the first page. "I don't mind, though we'll have to start from the beginning."

Arthur nodded and rested on one of the elders wings. Bate cleared his throat and started to read.

Both Bate and Arthur turned around and saw Meta. The little Puffball stomped over to them and stubbornly looked away, flustered.

The elder smirked at his childish behavior. "I thought you said it was boring."

Meta blushed in embarrassment and quickly shook his head. "N-no...that's not what I meant." He looked at his teacher, tears almost forming in his eyes. "It does sound interesting....so, can I listen too....please?"

Arthur huffed and turned away from Meta. "Baby..." He softly mumbled to himself.

Bate patted Arthur to hush him. The elder nodded to Meta's response and allowed him to join the pair. Meta smiled and ran to the opposite side of Arthur and nuzzled the inside of the elder's wing.

Bate smiled and started to read.

"Chapter One: The Scars He Left Behind,"

"Where it all began, and where it will eventually end, is where his journey begins...."

Meta and Arthur listened to him tell the story he was so fascinated with, and although they couldn't understand half the stuff in it, they kept quiet and continued to listen. Eventually by the 5th chapter, both Puffs started to doze off. They closed their eyes, but still listened until they ultimately fell asleep. Bate, who was so focused at the time, didn't noticed the pair fell asleep. When he finally reached the part he originally left off on, the elder looked over and noticed them both sleeping.

"Huh, I guess they couldn't handle listening through the whole thing at once..."

Bate set the book down and closed his eyes. He let out a yawn as sleep too started to consume him.