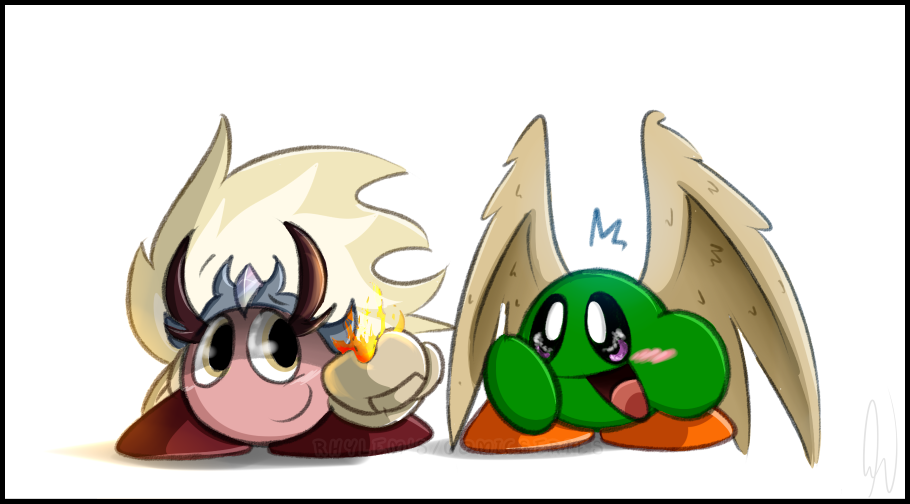 Flames of a Leo
Arthur / Petta
​
​
​“Hey, Petta,” Arthur’s wings perked in curiosity, and he shuffled closer to the Leo, “I have a question.”

“A question?” She repeated,

The Puff nodded, “Teacher Bate told me, ah...Leos are able to summon fire? Is…that really true?” He said, not really believing what his mentor told him.

To his surprise, Petta gave a nod. The Warrior flinched back in shock when he realized what Bate said was actually true, and now a small (or rather large) part of him wanted to see it. Petta slightly smiled when she saw how eager he looked once he knew, so she held out her left hand to show him. With a quick flick of the wrist, a small flame appeared on the palm of her glove. Arthur gasped in awe as he watched the flame flicker and dance before quickly disappearing when she closed her hand.

“Aw, that’s it?” Arthur frowned, wanting to see more of her special ability. “Can you do it again?”

“Arty, it’s just a flame,” She stated and snapped her fingers before the flame appeared again. “Every Leo has this ability. It’s nothing too special.”

“To you it may seem like it's nothing, but to someone who never seen it before, it’s kinda cool.” Arthur beamed and focused on the fire again. Who would’ve known she had such a cool ability! He wondered why she never brought it up or even showed it to him. Once the flame disappeared, he decided it would be the perfect time to ask. Who knows, maybe he’d end up learning even more their fire ability.

“How come you never showed this to me before? What other abilities do you have? Oh- can you shoot fire out of your mouth? Or how about cloaking yourself in flames? Hey, if you can use fire, does that mean you can’t burn yourself?"

“A-arty, slow down,” Petta slightly giggled, “While it’s true us Leos have a wide range of moves and techniques with our fire, well…..to be perfectly honest….I don’t really like using my ability that much.”

“Eeeeh? Why not? Don’t you think you can be a powerful fighter if you use your flames? I’m pretty sure one of our Teachers would love to train you and-“

His voice came to a stop when Petta held up her hand to hush him, “Arty, I…don’t want to use my flames to fight anyone. Fire’s really dangerous if you’re not careful.” She explained, her tone much more serious than before, “Fire is….wild…uncontrollable…..deadly. It leaves a permanent scar on everything it touches; whether it be a living creature or the earth below us. ”

Arthur’s chipper like personality greatly dimmed down when he heard that. He lowered his wings when he noticed how hurt she sounded. It certainly wasn’t the reaction he was hoping to hear.

“Arthur…I’m glad you like my ability, but I don’t intend to use it the way you want me to. Leos have a horrible reputation for, ummm….” Her voice softened, and she whispered the last part to him, “Our destruction."

"Many don’t like to be around us because of the fire we wield. It can burn down countless acres of land, and even turn homes and towns to ashes in just minutes. It may be cool to look at, but it's also something that shouldn't be underestimated.”

"O-oh, I...understand," Arthur mumbled an apology soon after, hoping he didn't insult her from his comments, “I….didn’t even consider mass destruction a scenario,” The Warrior admitted, now thinking it over.


“Many don’t….” She held out her finger and playfully tapped his forehead when she noticed how flustered he became,  “And because of it, they’re usually the first ones to get burned. Star warriors are no exception.”

Arthur gave a huff and swatted her hand away. “I hope you not implying that I’m somehow this foolish Star Warrior that's going to get burned?”

A small blush formed on his face when she started laughing. The flickering flame appeared in her hand once more, and she smiled at her truly oblivious friend. “Only if you think I am, Arty."
​
​​​​​​Artist Comment:

Petta lectures the reason why she doesn't like to use her fire ability as it's extremely dangerous if not handled properly. (That, and it may harm her precious flowerssssssss!!!) oAo;
Species © Nintendo/ HAL Laboratory
Interpreted characters created from said species © Rhylem