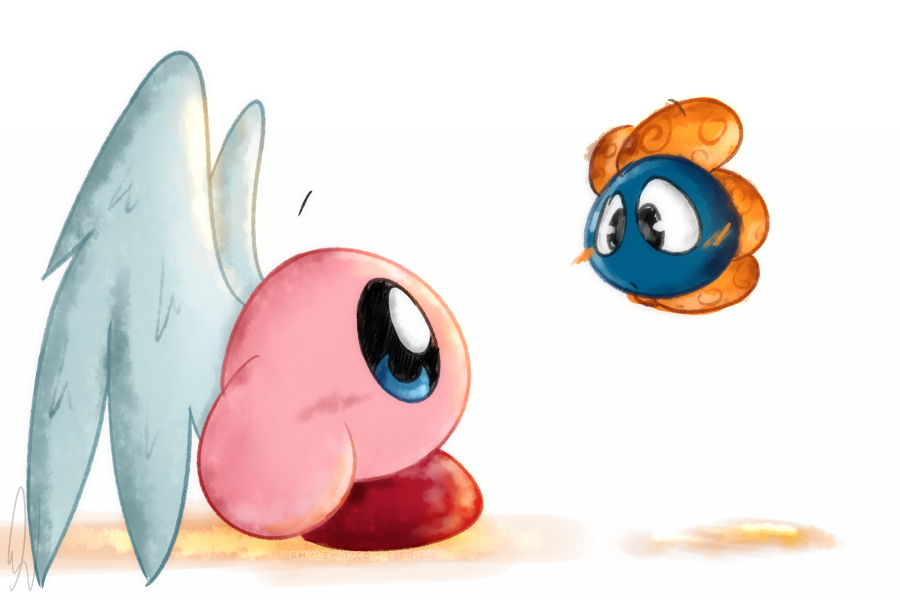 "Kirby made a new friend today."

Meta could clearly picture his mentor smiling on the other end of the phone once he said that.

"Did he now?" He hummed in amusement. "I'm glad. I hope his new friend is treating him well. "He spoke, referring to Kirby's jester like friend he's not too fond of.

"oh, yes." Meta nodded. "I've never seen someone appeal to Kirby like him. They love to fish every morning. And in the afternoon, he always brings Kirby a watermelon so they could eat it together. If I didn't know any better, I'd think they're siblings." He gave a slight chuckle.

Bate couldn't help but join in and give a small laugh. "He seems like he's finally found someone he could trust and rely on. I couldn't be happier."

"Yeah, about that...." Meta's voice shifted which Bate quickly picked up on.

"Hm? What is it, Meta? Please don't tell me he's not like that Marx child. I don't think I could bear if another one hurt little Kirby again." He frowned at the thought.

"W-what- n-no, it's not like that." He tried his best to ease his mentor. "Don't worry Teacher, Gooey would never dream of hurting Kirby."

"Y-yeah, Kirby gave him that name. He didn't have one when they met. In fact...that's why I'm calling you regarding it."

"At first I thought you were calling to share some good news but after what you told me, I have a feeling you have more to share than just that. You said Kirby gave him the name Gooey, right?"

"So then tell me, what was his name prior to that...?" He asked, his breath slightly hitching at the thought of what it could be.

"His name...." Meta gave a small sigh and looked out the window where Kirby and Gooey were playing.

"He didn't say, but I have a good guess since they all share the same one...."

It was then Bate finally figured it out. He didn't need Meta to answer it, because he already knew.

Quick little doodle I did at lunch. Since I talked about Marx in my series, I liked the idea of having another character befriend Kirby. I decided to pick Gooey for it! I have him a VERY small design change to suit my series, but he's still the same adorable Dark Matter who befriends Kirby. x)

I have a headcanon for him but I'll hold off until I hit a certain point in my story. Don't wanna spoil too much. >v<
Species © Nintendo/ HAL Laboratory
Interpreted characters created from said species © Rhylem