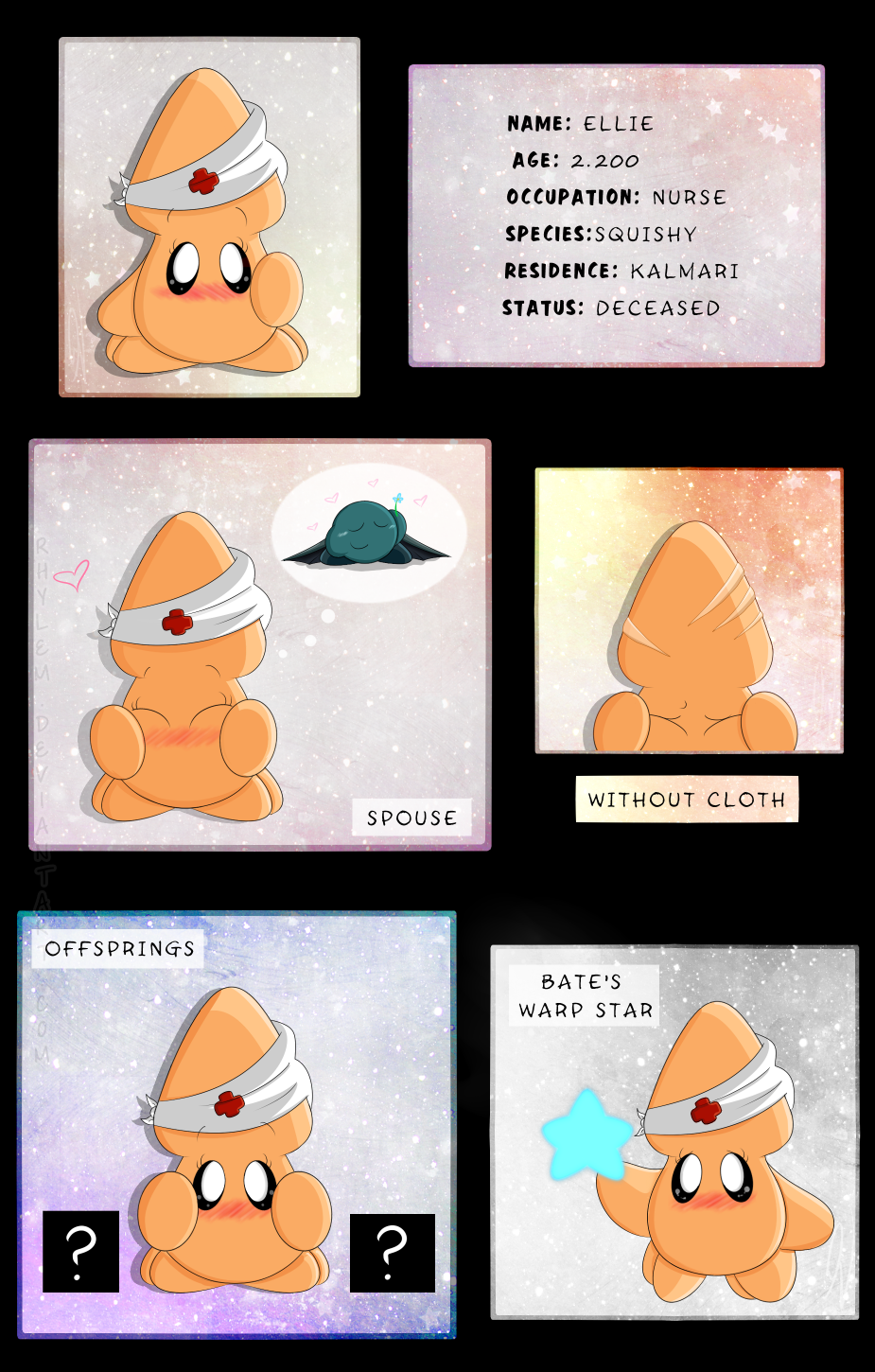 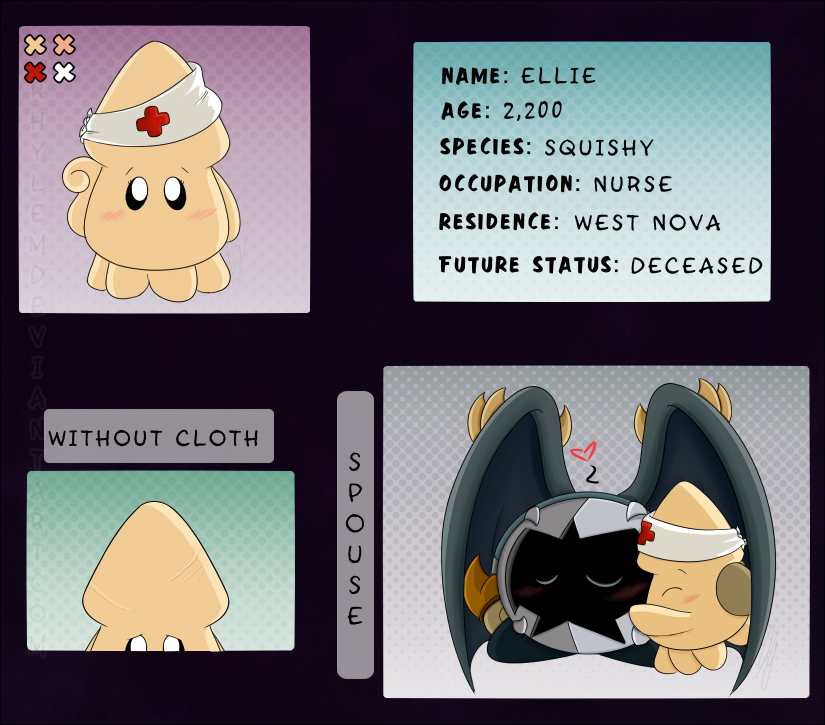 Ellie previously had a fear of heights. It was eventually cured
when Bate flew her around Kalmari after his recovery. She finds
flying quite thrilling and nags the Puffball to fly her around
when she's not busy...or if she just wants to spend time
with him.

The Squishy species are quite weak and lack the necessary
strength to properly fight and defend from harmful predators.
Ellie isn't as strong as Bate or Gordon, and will usually depend
on the pair for support if she is in need of help.

Ellie loves to dance, and even taught Bate a few moves while
he was staying in the hospital. Said hobby eventually interested
Bate, and the pair spends their time dancing together from
time to time.

This category mostly falls under Bate. Ellie hates it when
Bate goes against her orders. Usually it's stupid stuff like
going out to drink with Gordon, or going out to play
when he should be resting. The Squishy can get quite
frustrated with his stubborn attitude...especially if he
somehow gets injured from it.

Ellie works as a nurse in the only hospital in Kalmari. After returning
from vacation, she found out there was a new patient admitted to
the hospital. She asked her co-worker, Elliot, where he was since he
wasn't in his room. After finding him on the top floor, bleeding and
distressed, Ellie took it upon herself to take care of him until he fully
recovers. Both were far from friends when they first met. Bate hated
her and would constantly fight, argue and bicker whenever she came
close to him. Over time, she managed to earn the Puffballs trust and
was able to get near him without any type of hostility.


Ellie and Bate shared a close friendship during his stay in the hospital.
The day he was to be released, Ellie wanted to ask Bate he he'd like
to stay in Kalmari, since he had no other home to go to. She had a
difficult time trying to ask him, so Bate wound up asking instead.
Ellie blissfully said yes and allowed Bate to move in with her.


Both became inseparable after his release. The pair would usually go
outside and spend their hours flying through the skies of Kalmari,
or resting and enjoying the scenery around them. A few years
later, Bate asked Ellie to marry him. She gladly accepted and
became the proud wife of Bate.

Ellie received a draft letter a few years later to serve one year
tending to fallen soldiers in the war. Bate refused to accept it
and lied to the messenger; saying she couldn't go because she
was pregnant with their child. The messenger fell for his lie and
went back to get her draft canceled. Ellie was thrilled when her
draft was canceled, but was also a bit saddened to find out that
Bate didn't want to have a child. She knew the only reason he
said it was to cancel her draft. She tried to convince him to
change his mind, but Bate was still hesitant about it. Unsure
about the whole situation Bate was faced with, the Puffball
ended up leaving Kalmari to visit one of his good friends in
South Nova for a bit.


Ellie was quite surprised when Bate returned the next day.
What ever his friend said completely changed Bate's mind
about having and raising a family. Thrilled with his change
of heart, Ellie and Bate prepared to finally have their
first child together.


Bate and Ellie received terrible news from their doctor
that they were unable to conceive kids. They both
refused to listen and kept trying; hoping, somehow,
they could still be able to have one. After many
months and still no luck, Bate and Ellie decided
to stop trying. The pair became very depressed
and distanced themselves from their friends
as a result.


Ellie ended up receiving another draft letter and was told
she has one week before she is to be departed. The couple
were distraught from all the events that happened to them
ended up breaking down in tears. The pair spent as much time
as possible together before her departure. On their last night,
Bate and Ellie made a promise to always be together no matter
what happens. They both agreed, and the loving couple made
their way back to their home to spend one last night together.


During her departure, Ellie would write letters to Bate everyday to
make sure he's doing fine. She ended up asking Gordon to watch over
him since one of Bate's letters said he was having a hard time living
without her. Months passed and Ellie's letters suddenly stopped. This
mortified Bate, and he started to fear the worse. Even though she
never replied, Bate kept writing to her everyday until her arrival.
The day she was to return to Kalmari, Bate was informed that
Ellie has passed away.

The stubborn patient who ended up becoming her
husband. Ellie loves Bate with all her heart, and though
she's considered quite weak, she'll do anything to protect
him if he were in danger.

Ellie sees the little Gordo quite often....seeing as
he's quite fond of Bate, for some odd reason.
Though he doesn't talk, Ellie usually assumes
what he's trying to say when he comes by to
visit. She was also the one who originally put
the bow on his head to fix his busted spike.

Bate's first student who constantly
loves to bug him. Opposed to Bate, Atler
is very respectful towards Ellie and will never
do anything to hurt her. He can also be quite
protective around her since she one of the few
who cares for him.

Alba was Ellie's coworker before she left the
medical field to become a bartender. They both
got along, but never really talked to each other
outside of work. After Gordon and Bate's arrival,
they've been seen talking and hanging out
much more.

Elliot is the brother of Alba. He had a huge crush
on Ellie up until Bate proposed to her. He had
a cruel, bitter behavior, but over the years, his
whole personality changed and he became more
friendlier. When he found out Ellie was to be
drafted, he decided to go along to protect
her for Bate.

-She has 4 scars on her mantle. She
covers them with a white cloth.

-She and Gordon are the only ones
who can really cook out of the group.

-She sometimes need to sleep in the
living room because Bate's loud
snoring keeps her up at night.