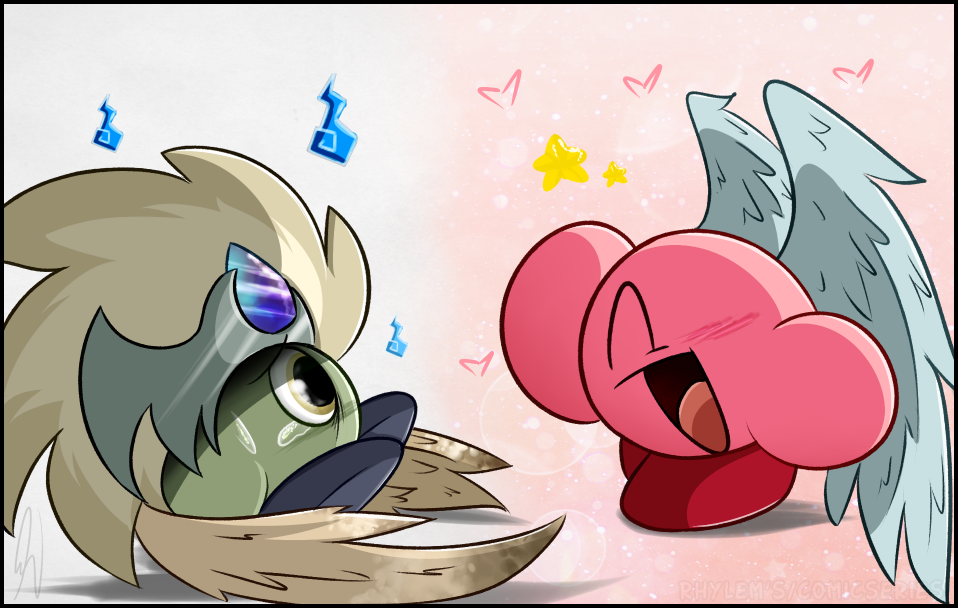 ​
​The next day, Meta and Kirby waited in front of Arthur’s home so they could properly greet Atticus since their family left the restaurant before they even had a chance to talk. Kirby anxiously knocked a few more times for his uncle to open it, and eagerly tugged on Meta’s wing.

“Teacher, what’s taking so long?!!” He whined when a 'whole' 15 seconds passed without anyone answering it.

“Kirby, calm down.” Meta said when he saw how loud and routy his student was getting. "Remember what I told you about your cousin Atticus?”

Once he said that, Kirby backed away from the door and quietly stood by his side again. With a small huff, he softly repeated what Meta told him earlier that day, “That he doesn’t like loud noises....”

Though he couldn’t understand why, he thought to himself. Then again, he doesn’t really remember much about his cousin. Usually when he visits, he was never able to have visitors. If it weren’t for all the pictures they get from his uncle, he wouldn’t have even known he existed. But even if he didn’t know him very well, Kirby was still excited to see him as he brought a gift along for the occasion.

When the door finally opened, Kirby stayed by Meta’s side and smiled when he saw Arthur. He tried to remember to keep his behavior in check, so he gave a small wave- though still showing his boisterous features from wanting to come inside. Arthur gave a chuckle from how anxious his nephew was, so he stepped aside and let the pair in.

Kirby looked around but noticed no sign of Atticus. “Ummm…” He looked up at Meta and softly whispered to him. “Can…he turn invisible?”

Meta quirked a brow, “Ah, no, Kirby- he’s not invisible.” He said, slightly shaking his head. The elder picked up the child and followed Arthur into the living room. Once seated Kirby, again, tugged on his mentors’ wing to ask. Meta took the hint and faced his comrade.

“Kirby is quite eager to see Atticus. Is he able to have visitors?”

“O-oh, Atticus isn’t here right now. He’s at the shop…” Arthur said, not wanting to explain how scared he was and begged Petta to take him along. “He should be here around lunch time, though.”

Kirby glanced at the clock. Oh- that's only 30 minutes! Quite excited, Kirby placed his backpack in front of him to rummage for the gift he brought along.  “Look what I brought!” He said and held up a small crystal. “You said he likes gems and crystals, right? Do you think he’ll like it?”

The little Puff beamed when his uncle gave a nod. “I’m positive Atticus will love it, Kirby. That’s very thoughtful of you to bring him something.”

“Don’t encourage him, Arthur.” Meta cut in. “Half of the luggage I had to carry were all gifts.”

Arthur resisted the urge to laugh, “If I remember, didn’t you do the exact same thing for Teacher Bate? Everyday was a drawing, or some odd trinket you’ve found. Seems like the young warrior's walking in your footsteps, hm?”

Meta just rolled his eyes from the remark and kept quiet for the rest of the conversation. It wasn’t until he heard the sound of Atticus’ voice did he finally speak. Kirby heard the sounds as well and immediately scrambled to get his gift ready. He was FINALLY going to see his cousin. He wondered what he was going to be like....

The door opened, and Kirby caught a glimpse of a large tuft of hair. He saw the fairly small figure carrying a potted plant as he was happily chatting to his mother. The whole atmosphere quickly changed, however, when their eyes met. Kirby watched as the Leo drop the plant and run behind Petta.

“H-huh?” Kirby frowned a bit when he got such a terrified reaction, “D-did….I do something wrong?”

Meta placed a hand over his head to hush him. Both watched as Arthur stood up and headed over to where Atticus was hiding. A small yelp was heard followed by the warrior carrying the small frame over to them. The little Puff tiled his head when he saw his cousin covering himself with his rather large wings.

Kirby looked up at his Mentor, a bit confused. “Teacher, why’s he covering himself?”

“I’m sure he's just a bit shy.” He gently nudged Kirby, “Maybe it’ll help if you introduce yourself."

The warrior gave a nod and hopped off the couch to head to the one Atticus was occupying. Arthur set his son next to the Puff, and Kirby happily introduced himself,

“Hi! I’m Kirby!” He cheerfully greeted and waited for a reply, but…..

He never received one.

“Ummm…..” The Puff poked his wings a few times, but fell back when the Leo cried in fear. Meta, who was watching his student failing to befriend the Leo glanced at the couple.

“Is there a reason why Atticus is so….”

“He’s….very cautious.” Arthur gave a small sigh, “We’ve been trying to get him to come out of his shell, but….”

“He’s quite stubborn, especially when it comes to talking to others.” Petta finished, watching as her son refused to talk to Kirby.
-End-

Aaah, poor Kirby is having such a hard time befriending little Atticus. Both are complete opposites when it comes to their behavior. Kirby is extremely welcoming and quite chatty while Atti doesn't talk much and prefers to be alone. >v<;;
Species © Nintendo/ HAL Laboratory
Interpreted characters created from said species © Rhylem