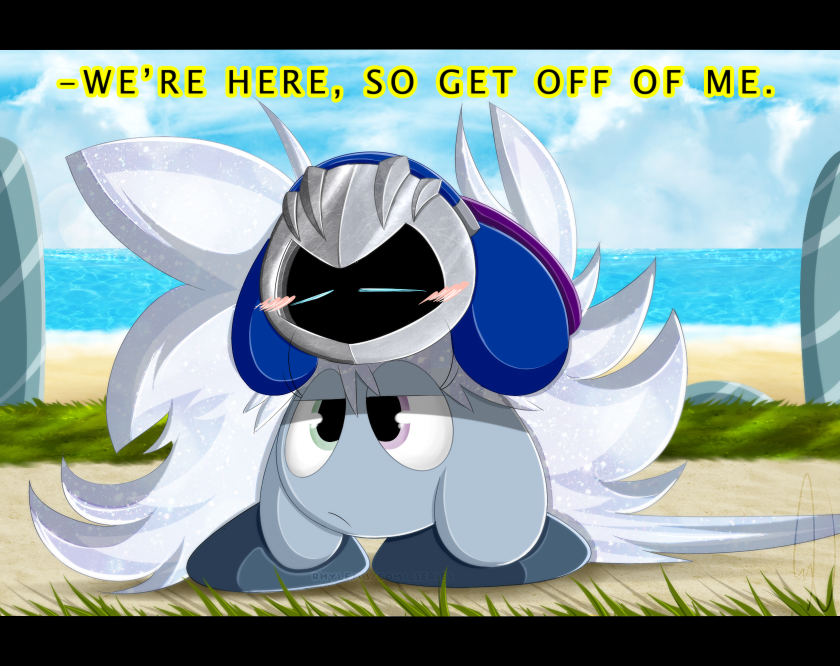 Cool Off
Kes / Meta Knight
With a tired groan, Meta Knight's pauldrons loudly hit the floor of his room. He was way too exhausted and hot to lug two giant pieces of metal on his shoulder for the entire day. In fact, he didn't even feel like going out today. With summer just starting on Pop Star, Meta had a feeling he wouldn't be out and about like the other seasons. He was never a huge fan of heatwaves, then again, who is? Would cooling off at the beach be a good idea? Maybe spending the afternoon in the water would be able to cool him off. Surly Kirby would enjoy it as well, and even Kes.

With feet sluggishly making his way out of his room, Meta blinked in surprise when a gust of cold air hit his face once he entered the hallway. It didn't feel hot an humid like before, and Meta peeked in the living room and noticed Kirby happily playing with Kes.

"I suppose even Kes felt it was necessary to cool down the house." He quietly thought. Being around her was like standing next to an open freezer. She emits a slight chill in the air, so it was quite handy during the warm season. During these terrible heatwaves, however, it has little to no effect if one were to stand next to her. For her to make their house this cold, she must've really lowered her body temperature.

"Da da da da!" Kirby's cheery voice calling him shook his thoughts, and Meta Knight made his way to the living room to greet the pair. Kirby lifted his arms to be picked up, and he hugged the figure once he was securely in his arms.

"Oh, hey, Meta." Kes sat up, greeting the warrior. "We've been waiting to head out for since this morning, where were you? "

"Sorry, Kes. I've been trying to cool off, but, ah...it seems like you got that taken care of."

"The house was starting to heat up, and Kirby was getting restless. I figured if it's for Kirby, you wouldn't mind." She said, knowing Meta never liked it when she would drastically change the temperature of their home.

"Since there's a current heatwave going on, I welcome it." He nodded in agreement. "I was thinking of heading to the beach to cool off, but now we can stay inside instead."

"Kirby was looking forward to spending the day outside. You can't break your promise, what kind of example will you be setting for him?"

"The kind of example where it's better to break a promise than to die of a heatstroke. We can play outside when it cools down, several months from now."

"Meta..." Her voice was less than amused. "I know if Bate broke such a promise when you were younger, you'd be crying and throwing a tantrum. You're not going to die of heatstroke, so quit acting like a child and take Kirby to the beach. Unlike you, I'm the one at risk here. You're going to have to do more of the care taking until the weather is better suited for me. In fact, I'll stay here and keep the house cool while you spend the afternoon with him."

"Ma, ma, ma, ma!!" Kirby quickly piped up when he heard her say that, and started struggle out of Meta's grip to get to her.

"Well, would you look at that. I don't think Kirby likes that idea." Meta humorously smirked at the other. "You're going to have to come with us unless....wait-! Don't tell me you're going to break your promise to Kirby?!!" He let out an audible gasp to tease her.

Kes clearly knew he was mocking her, and the Leo puffed up her cheeks and shot several shards of ice at him in frustration. She got up, took the child from his arms, and harshly nudged the warrior out of the house.

"Kes....wait up..." Meta tiredly reached out to the Leo. The beach was still several minutes away, and the heat was far too much for him to handle. "It's getting too hot, can't we take a break and rest?"

"I need to get in the water as soon as possible, so we don't have time to rest." Kes spoke, gently setting Kirby down as she headed to him. The warrior looked up, and gave a small yelp when Kes leaned forward and hugged him. Her body was still as cold as ice, and Meta felt himself feeling much better. His cold bliss didn't last long once Kes pulled away several moments later. His wings lowered when the warm air and blistering heat started to return. Surly if Kes was still cold after this long, she wouldn't mind helping him seeing as he IS her best friend in all of Pop Star and Kalmari combined. The warrior thought in silence for a moment before nodded to himself to go through with it.

"Now c'mon, lets keep going." Kes spoke, heading back to Kirby. "You'll feel better one we get in-OOOUCHHHH!!." Kes shouted in pain when she felt something heavy jump on her back. Regaining her balance, she glared at the puff now perched perfectly still on her head.

"But Kes, I'd do the same if you were in my shoes. Please?" A small blush formed on his face as he started to cool down. "Remember that one time I let you ride on my back when you were too tired to walk home? Return the favor by helping me."

"That was different and you know it! I twisted my ankle, you blockhead."

"Fine, fine..." She mumbled, motioning Kirby along so they could continue on. "Just so you know, Kirby hasn't complaint this entire time, so you're letting a toddler completely outshine you."

"If it's to keep me cool, I can live with that." He responded, happily accepting what she said.
-The End-
​​​​​​Artist Comment:

During the warm season, Meta can be a biiiit clingy with Kes. She's the only one who can cool the knight off during bad heatwaves. x)
Species © Nintendo/ HAL Laboratory
Interpreted characters created from said species © Rhylem