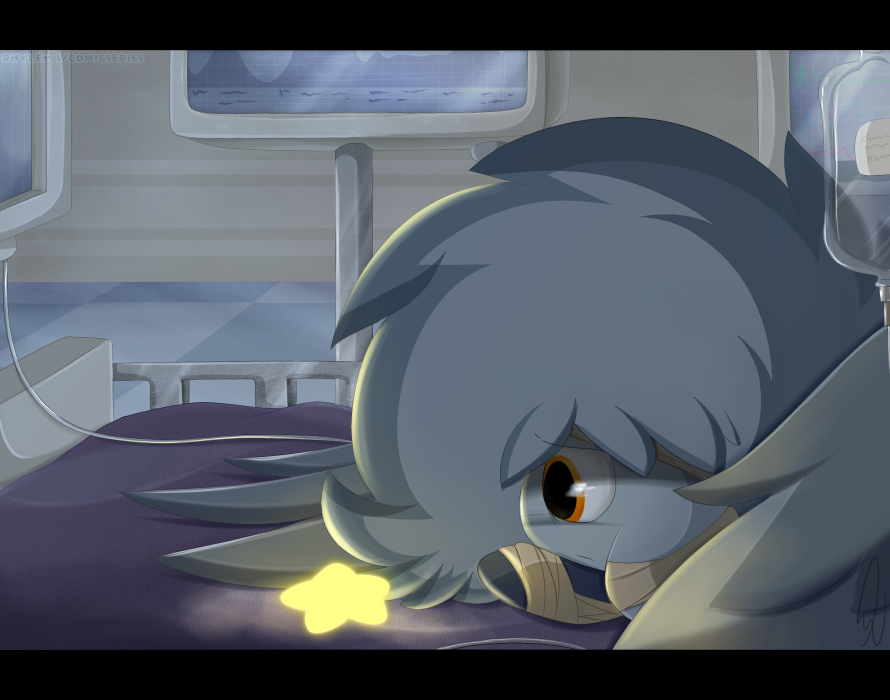 ​
There has always been strength in his life, growing up.

There is his mother. As rugged an Ice Leo as anyone could be. Gentle with her family, she knew what to do when a demon beast came calling, full of fury for her enemies enough to freeze them from the inside. A tempest that couldn't be controlled.

There is his father. He's retired, had been since Tulok's babyhood to care for his family. But he is a Star Warrior, even if he's set down his blade. The few times Tulok has witnessed him in action - to spar, to stretch his wings, to protect his family - the man had always been a sight to behold. Where his mother is a tempest, his father is a cyclone. Quick, controlled, but deadly when needed.

There is Kirby. Kirby, his brother, whose strength could only be outmatched by his zest for life, he is an unstoppable force in motion for all that he never wanted to show it around his family. A force to be reckoned with more than any storm, Kirby is more like a kind of extinction event. There is nothing he cannot do. Nobody he cannot defeat. Not a single thing has fought him and won.

It's ironic, Tulok thinks. That he should be blessed with a family that could carry the weight of the universe on its shoulders when he? He's just...nothing.

The journey out of South Nova is a blur. Quick, because South Nova could not tend to injuries as severe as his own, requiring he move somewhere with better facilities, but he doesn't pay attention. Tulok doesn't remember much at all, actually. Words. Questions. His parents, here and there, expressions concerned, sad, pitying. He's not dumb. He sees that look in their eyes, and he'd give anything for them to take it back.

Mends is there when he arrives in West Nova, there to bring him to the hospital where he's wheeled inside without a moment's notice, set up in a room to check over his injuries. There are questions from the doctor, to his parents, and to him. Quick and professional, but Tulok doesn't respond to any of them.

"He hasn't said a word since we left..." His father. Worried.

"Hmm..." Mends, the old doctor of West Nova. Thoughtful. "Alright. We can address what he has for right now, and maybe with time and rest, he'll be up to speaking later."

"Difficult to say. PTSD has many different forms. I don't want to discredit the idea, but I can say that mutism is rather rare, although given his age... But I'm getting ahead of myself. We will treat him, give him food and rest. Then we can see what happens."

They move around him in a blur. Mends leaves, as does his father.

Words, from off to the side. His mother, still present, sits at his side in his hospital room that smells vaguely of cinnamon and disinfectant. Her presence is cool and calming, and he can feel the smile in her voice even as he stares off at the window, where he had been gazing since his arrival. "Tulok, are you alright? You still haven't said anything since we left. Please, speak to me..."

How could she, one part of him thinks, the part bitten by frost and bitterness. How could she ask him that, after everything. She, as an Ice Leo, should know, shouldn't she?

"...Well, we should be ready to head out to Pop Star in just a few more days. Mends says you're doing very well!"

No, he isn't. He couldn't get any worse.

Why is he so weak?

Kirby wouldn't have gone and failed so miserably.

Kirby would have won. Tulok himself, he is just...

There is the sound of a creaking chair, a soft sigh from beside him that is only barely noticed. His mother says something that he doesn't pay attention enough to hear, and the door closes. And he is alone.

Some small part of him thinks he's always been alone. In some way.

He isn't supposed to move with the injuries littering his body still, the bandages keeping them tightly sealed. Breaking open his wounds would be ill advised.

Late at night, with the doctor gone, the nurses downstairs, his parents settled into a small corner of the room on a foldout bed resting for the journey ahead, Tulok pulls himself from the comfort of linen and feathers and steps over to one of his luggage bags. He reaches into a well worn pocket, rummages, and curls his hand around the glowing object to stifle its light just enough that it might not disturb the room's sleeping occupants before heading back to bed.

Kirby's Warp Star has been with him practically since birth. It's always been a beacon of comfort, company. A night light when the demon beasts hid under his bed in the dark, a shield to ward off nightmares. A piece of Kirby right there when Kirby couldn't be there himself, and Tulok never felt lonely with it around. It, in essence, was his brother. Who his brother was. To give it to /him/, especially when he had only been a baby, was a sign of confidence. Trust. That's what he learned from his father.

Tulok had never once felt shame gazing upon it. Now, shame seems to be the only thing he /can/ feel.

Why had Kirby given it to him. Why something so important? When Kirby was the Warrior of Warriors, and Tulok could barely make ice without collapsing into an asthma attack.

He stares at it, at its glowing brilliance. Shining like the Warrior himself, in the face of someone that could never be worthy of it, no matter how he tries. He stares at it, and something curdles in his gut, climbs into his throat, threatening to choke.

The first sound that he makes in days crawls out of his throat in a stifled wheeze, and suddenly he can't stop. Sitting there, in front of his brother's Warp Star, he wheezes, and sobs, cries, tears burning tracks down bruised and battered cheeks.

Kes' home doesn't have a proper hospital, so they needed to head back to Kalmari so Tulok could be properly treated. He hasn't talked since the conversation with Meta, and his parents are starting to worry. Eventually he got up from his bed late at night when everyone was asleep and pulled out Kirby's Warp Star hidden in his backpack. Kirby- the hero, the well renowned Star Warrior and savior of Pop Star. How could he even compare himself to someone like his brother. He couldn't even finish a small obstacle course, while Kirby's been fighting Demon Beasts twice his size at his age. He doesn't look forward to heading back to Pop Star since he's embarrassed to tell Kirby. Of course Kirby wouldn't care in the slightest, but Tulok's taking it much harder since he was a born into a family of fighters and heroes.