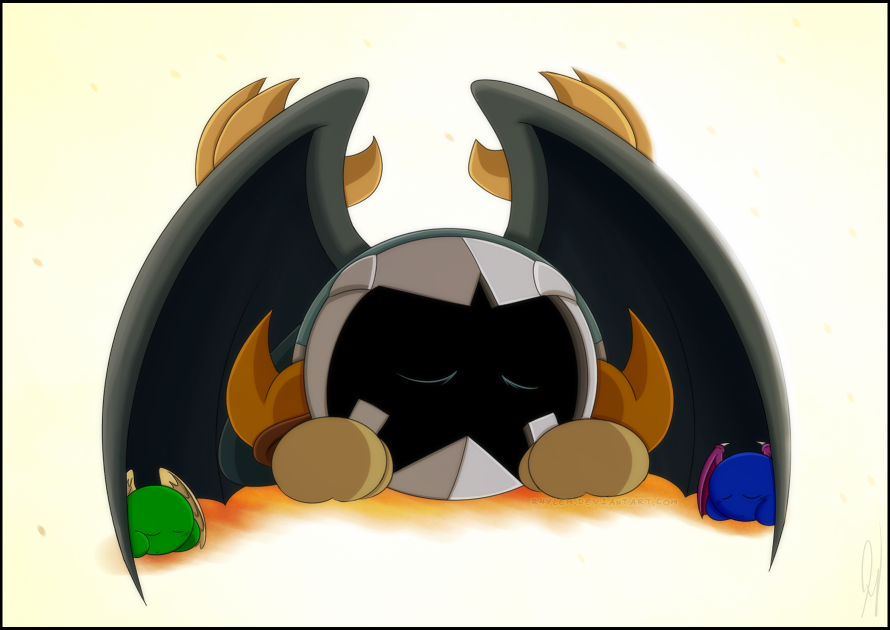 ​"HEY! Move over!!!" Meta shoved Arthur with his shoulder. "Go sleep somewhere else."

"Me?" He kicked Meta with his leg. "Why don't you find somewhere else to sleep!"

"OWWW!!!" Meta rubbed his cheek where he was kicked. His eyes slowly started to swell up with tears.

"It's only because he hit me with his shoulder!" Arthur defended.

"I didn't hit you!" Meta glared at his supposed friend. "I barely even pushed you!"

"Enough, you two." Bate grabbed the bickering Puffballs with both of his wings to separate them.

"If I hear you fighting one more time, I'm going to double your training hours, got it?!"

He placed the pair a few feet away from one another. Both Puffballs shot a glare at each other before turning away.

"Fine!" They mumbled in unison.

Bate found it strange how two beings who grew up together since birth could have such hostility towards the other. Arthur and Meta were basically siblings...well, that's what their teachers assumed; since all five were found together. Still, sibling or not, those two were at it almost everyday.

'Maybe it's just a phase.' He thought to himself.

Bate watched them crawl at the end of each of his wings; both glaring at the other one last time before trying to go to sleep.

The elder smiled at the two and let out a yawn. "We'll continue training in an hour." He shut his eyes and fell asleep.

Bate's resting habits were quite different from the other two teachers. Gordon and Ramset allowed small breaks, but never more than 10 minutes. Bate, on the other hand, gave both of his students an hour of rest during their training. He believed that if one were to take a proper break after a hard morning of training, they would perform much better in the late afternoon. That, or it was just an excuse for the elder to rest.

His two students weren't sure which one to believe.
​
​Artist Comment: