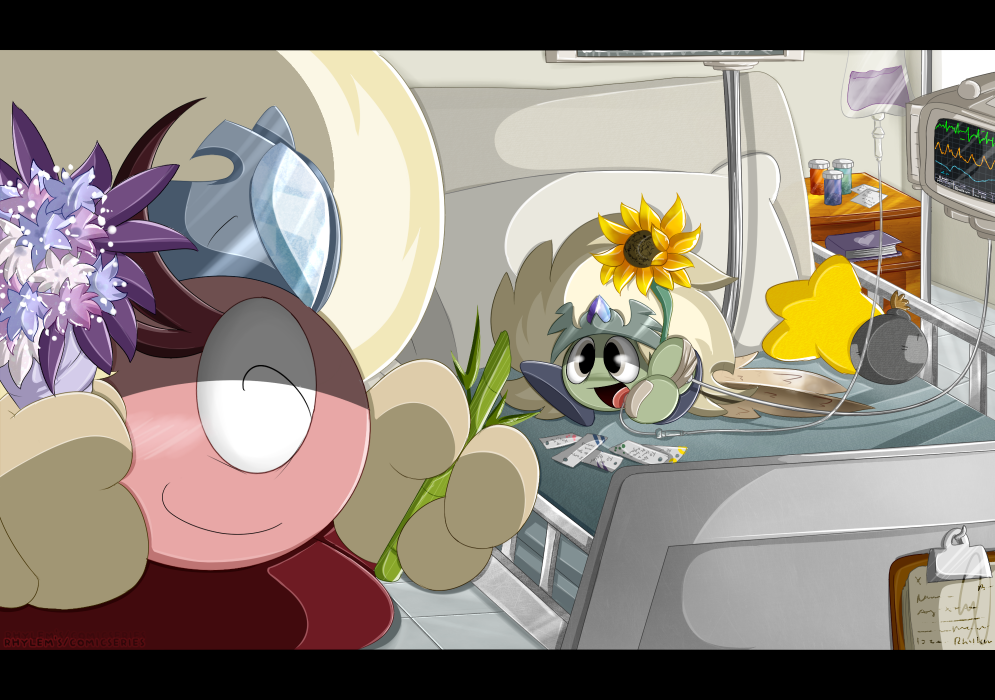 ​"Atticus, dear, look what one of the doctors brought you."

Holding out her hand, Petta showed her son a bright green shoot of bamboo. Atticus, who was still clutching onto the large sunflower his grandfather brought earlier today, inspected the object.

"Did you write your wishes on the paper she gave you?" She asked.

"Uh-huh." He nodded, gently setting the flower down to scoop up several of the papers to show her. "Daddy and O-Oujii helped me write them! But...they wouldn't tell me why."

"You'll find out soon enough, my dear." She smiled, heading to one of the desks to prepare the shoot for his special surprise. Atticus crawled to the foot of the bed and tried to peer over to get a glance at what she was doing. It was no use, however, his mother towered high and blocked whatever she was working on. As much as he wanted to get out of bed to see, he didn't want to risk tripping over on all the cords and wires attached to him, so with a small frown, Atticus anxiously fluffed up his wings and settled back where all his stuffed plushies were. While waiting, he decided to take the time to inspect all the pieces of parchment with his wishes on them. Some were simple like being able to see his cousins, or having his favorite dinner tonight, or even getting a particular toy. Other, very unlikely wishes he asked, were never coming back to the hospital or ever being sick again. He saw how sad his grandfather and father looked when he asked them to write that, so maybe asking for the impossible was stretching it a bit. Still, even with that in mind, it'll be nice to have at least one of them come true."

"Okay, finished!" Petta piped up, catching the attention of the toddler. His eyes sparkled in joy when his mother held out the colorful ceramic bowl with the single bamboo shoot in the middle.

"This bamboo is very special, Atticus. It once belonged to your great Uncle Elliot. He grew and planted many bamboo in Kalmari while he was alive. It's said if one were to write their wishes and tie them to its leaves, it may come true." She then handed him several bits of string. "Would you like to try it?"

She couldn't help but smile when she saw how excited he was. She kept a firm grip on the bowl while Atticus was trying to tie each note as gently as possible. Petta got a glance at a few of them and had a feeling she and Arthur would be able to fulfill some of them. All but one was left, and she saw him starting to hesitate. She watched him look over the note before giving a small sigh and discarding it.

"Atticus, what's wrong?" Setting the bowl down, she reached over to grab it from him. It didn't take long for her to figure it out after reading the note, and with a comforting smile, Petta gently nuzzed her son and held up the wish he asked for.

While he didn't speak, he was quite interested in what she had to say.

"But even then, you have to remember that wishes are something we desire. Something we yearn for. If we want what we desire, we must also have to do our part to make sure they become a reality. Atticus, I know you may think you will never get better, but you are just as strong and determined as your father. If you keep working hard and doing what the doctors tell you, there's going to be a day where you'll be able to do everything you wished for" She placed the lone paper in his hand and helped him tie it to the last branch.

"So don't think this wish isn't going to come true, Atti. I know it will, one day."

Being a hybrid, Atticus spends a lot of time in the hospital due to falling ill or having to take tests to make sure he's healthy. As a child, he had a hard time maintaining his temperature and would constantly fall sick because of it. There were days where he’d spend days or even weeks recovering, and his parents knew how much he absolutely hated being stuck in there until he was given the okay by Mends to leave.

Petta thought of a way to help coax Atticus anytime he had to stay there longer than a few hours. She would always bring a large variety of flowers and plants for him. (This is also a huge reason why Atticus is so fond of flowers as well.) Sometimes she’d even go the extra length and decorate the whole room for him. She wanted to distract him in hopes he’d pay attention to all the plants since Atticus has a horrible habit of ripping his IV or cords as he hated having anything attached to him. It seemed to work, so Petta makes it her mission to always bring plenty of flowers for her son. In this case, she also brought some of Elliot’s lucky wishing bamboo. u u
Species © Nintendo/ HAL Laboratory
Interpreted characters created from said species © Rhylem