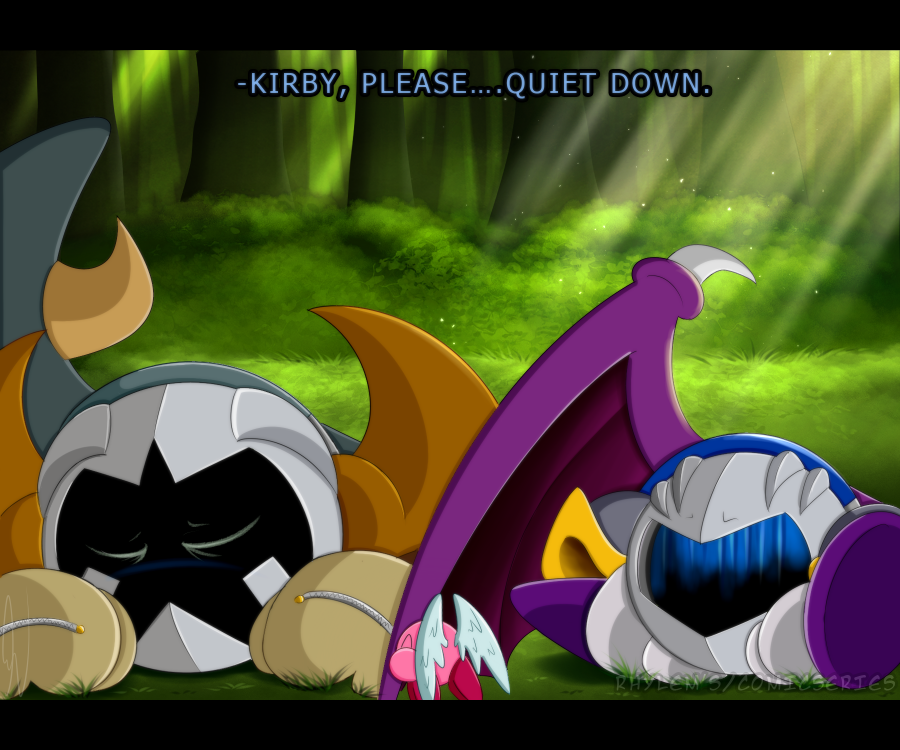 As the Years Pass By

​
​A great deal of time has passed in the eyes of a Star Warrior named Meta Knight. He was currently visiting his old home town to pay a visit to his beloved mentor and caretaker, Sir Bate. He visits a few times out of the year to make sure he’s doing well since Bate's unable to travel to Pop Star anymore due to his failing health. Kirby, who begged Meta to take him along, continued to tug on the old Star Warrior’s glove to play with him.

“Grandfather Bate, wake upppppp!!!” The little voice screeched. Meta, who was sitting next to the elder, slightly covered his ears from the piercing call.

“Kirby, please....quiet down." He said and used one of his wings to shield his teacher from Kirby’s constant pushing.

“Awwwww,” The young warrior pouted and tried to crawl under his mentors wing to get to Bate, “But he's been sleeping ever since we got here....."

Meta could hear the disappointment in Kirby’s voice when Bate didn’t wake. He looked at the elder who was currently sleeping and gave a small smile. Even after all this time, he was still unable to have a peaceful sleep without being disturbed. Though over the years, however, Bate's become quite a heavy sleeper and isn’t effected by his surroundings like he used to. Kirby, who’s been nagging him for quite some time, had little effect on waking the elder warrior so Meta decided to step in and try to wake him up....for Kirby’s sake.

“Teacher,” Meta put a hand on his shoulder and gently shook him, “Teacher, could you get up, Kirby wants to talk to you.”

After a few minutes, Kirby suddenly smiled when Bate slowly shifted in his sleep and eventually sat up. The little warrior pushed Meta’s wing out of the way and hugged the elder.

Letting out a small yawn, Bate lifted up his mask and rubbed the sleep from his eyes. He looked down at the small child hugging him back. "Ah, Kirby, this is a surprise. I didn't expect to see you here in Kalmari. Am...I still dreaming?"

"Teacher flew us here super quick!! He said it was a surprise!!" The toddler giggled and looked over at his mentor.

"Drop by? It takes several days to get here." Bate corrected and clutched the trunk of the tree he was sleeping under for support as he stood up. He figured Arthur called him regarding the incident he had a few days back. While nothing major, he had a hunch Meta would over react to it. And he was right. The boy flew all the way to Pop Star just to visit. The elder couldn't help but crack a smile at his worrisome student.

His train of thought suddenly interrupted when Kirby began pulling him.

"Let's play!" He happily smiled. "I've been practicing a whole lot with Teacher and I wanna show you! Let's have a race!"

​"Kirby, I told you no racing." He lightly scolded the Pink Puff. Kirby, of course, didn't take it well.

"You keep saying that, but Grandfather looks fine!" He bit back, not believing what Meta told him before they arrived. He looked up at Bate, hoping he'd agree with him. To his surprise, the elder agreed with Meta.

"I'm sorry, Kirby." His voice laced with disappointment like his grandson. "I had a pretty hard fall a few days back and I'm not able to do much until I recover."

"S-so what Teacher said was true?" Kirby stopped tugging and stepped back. It was then he finally took notice of his wing. Part of it was wrapped up as well as one of his legs. He stiffened at the sight and Meta decided to intervene. He picked up the child and headed towards his mentor.

"Your Grandfather is recovering well, Kirby, I already told you he was." He spoke to the sniffling child. On the verge of tears, Bate sensed he needed to say something.

"I fall down all the time but I never injured myself that bad." Kirby recalled several past incidents where he slipped during training, or when it was heavily raining. Maybe he'd bruise or scrape himself, but breaking something? Surly his teacher and Grandfather were hiding something. He perked a bit when Bate patted his head.

"You're still quite young, Kirby. A fall like that wouldn't have done much damage, but if you're my age, well...." He motioned to his wrapped wing.

"Your Grandfather just needs to be more careful." He put much emphasis on the last part since he was just as worried as Kirby. Would this time be any different?

Bate took the hint and shyly rubbed his head, agreeing.  He didn't think a simple sprain would get them so worked up. Then again...it was Meta. No matter how many years pass by, he's still the same, overly protective little Gumball. Though it seems like his behavior is starting to rub off Kirby. He'll have to remember not to be so reckless in the future. It's hard to deal with when his students are worrying, but his grand kids?

"Ah, Nova, I'm sorry to get you all so worried." He took a few wobbly steps to head out of the forest; Meta and Kirby close by. "How about we head home and I'll make us some....some...." Bate's volume got low when Meta gave a rather loud cough.

"Or ummm.....maybe you could help this time around, Gumball. I...should probably rest."

Meta eased up, giving a small smirk under his mask. So his teacher was finally letting up on his persistent stubbornness?

Meta and Kirby visit Kalmari when they received a call from Arthur that Bate injured himself. While Meta was trying to casually say they were just visiting, he couldn't fool Bate. He also learned to be more cautious with his surroundings when he saw how worried Kirby became. Not good to get all his grand babies in hysterics. >x<;;
Species © Nintendo/ HAL Laboratory
Interpreted characters created from said species © Rhylem
Story © Rhylem