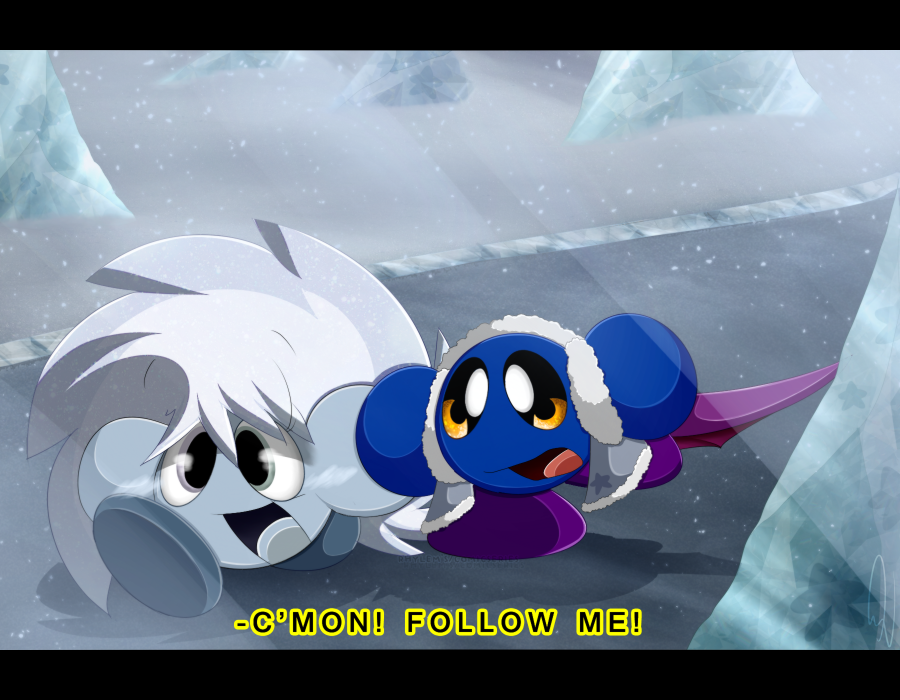 
​
It was an unusual place, he can surly agree to that. Why anyone would make a town out of snow was something beyond him. Tightly gripping his coat, Meta snuggled back into the folds of Bate's wings. They've been doing a great job keeping him warm considering the home they're staying in is nothing but ice. Settling in, he gave a rather bored sigh since there was nothing to really do here. He was told not to leave his teacher's side since they were outsiders. He didn't really understand what that meant, but seeing as the occupants of this home helped them escape the ongoing blizzard, he knew he had to obey what his mentor said.

It was strange, of all the times he and his Teacher traveled to see Miss Atka, there was never a storm as harsh as the one they were caught in. It even caused his mentor to be weary when it hit, but then again.....maybe it was because he wandered off in unfamiliar territory.  Since it's rare he visits South Nova, he wanted to spend as much time playing in the snow.  Bate didn't seem to mind, they even build a few snowpuffs together! Was it because of that mysterious creature he saw? Truth to be told, he couldn't get a good look at it. He didn't want to get too close in fear of it being a Demon Beast. But once he called Bate to take a look, that's when the blizzard struck. Surrounded in a flurry of snow and ice, he and his teacher had no idea where to go.

"Hmmm...." Meta softly hummed, unable to recall what else happened. "Did...I fall alsleep? I don't remember taking a nap, but.....

Meta's wings quickly perked when he heard someone calling him. Slowly peeking out of the old warrior's wings, he scanned the room and spotted a small figure near the entrance of the door. Meta immediately hid once more. Although he wanted to meet them, he was strictly told not to talk nor get near anyone without his permission. If Teacher found out he broke that rule.....

"Hey, why are you hiding?" The voice spoke. This time, it was much closer. Meta inched further back until a silhouette of the figure blocked the opening. Gently lifting up a small portion of the Warrior's wing, she peeked in and welcomed Meta with a smile.

"You're the ones my dad brought in, right?" She spoke, closely inspecting the small warrior in front of her. "Wow, so it is true; you really are outsiders. What's your name?"

Still snugged in the safety of Bate's side, he softly spoke since he didn't want to wake him. "Umm...my name's Meta."

"Meta, huh? Well, Meta, don't you wanna come out? Aren't you getting hot in there?" She asked.

"Hot? Aren't you cold?" Meta responded, slightly shivering once she lifted his wings. The cold air was seeping through, and Meta started to wrap himself with Bate's scarf.

"Huh, what are you talking about, the weather is perfect!" She cheered, albeit a bit too loudly. She quickly backed away when Bate started to push himself up. Meta didn't speak as his mentor gave a small yawn and tiredly rubbed his eyes. After a minute or so, he finally spoke.

"Y-yes, Teacher?" He crawled out and toddled in front of him. Bate reached forward and gently patted his head.

"How are you feeling? Are you still cold?" He asked, since Meta wasn't even able to move and eventually passed out once they got here.

"Much better!" He nodded. "I'm a bit chilly, but it's much better than being stuck outside." He nuzzled him.

"That's good to hear." He smiled back and took in his surroundings. "I was informed the blizzard won't pass until late tonight. We'll have to stay here a few more hours so just stick close and try to keep warm."

"I will but...." He slightly motioned him to look near one of the drawers. Bate looked forward and could barely make out a small figure nestled behind it. He could only smile as he looked down at Meta. While the small Puff was resting when they first arrived, he had the pleasure to meet the child of the one who's currently housing them. She was quite eager to know more about the pair, but her father motioned her away so he and Meta could rest. A few hours passed after the encounter, but apparently she's still as curious as ever. Then again, he'd be lying if he said he wasn't curious as well. This was the first time he's ever met an ice based Leo before. It may be the only time he and Meta will ever get the chance to see one.

"Hello, you must be Kesuk." He figured it'll be best to start off with a simple greeting. "We met earlier today, remember?"

Eventually, the small figure made her way out of the corner and stepped forward. She gave a nod and happily spoke, "I do! Dad told me not to bother you, but....we never get visitors from the outside!!! I've never seen anything like you before!"

"The outside?" Meta questioned and looked at his teacher. "What does that mean?"

"It's where we live, Gumball. The place we're currently staying has little to no contact outside their village. It's remote and extremely difficult to reach this place."

"Yup!!" The figure spoke, smiling. "The blizzards help protect us! We can get around super easy through them, but not everyone else. My dad says it to protect our home from Demon Beasts or anyone looking to harm us. You're super lucky, we never allow outsiders in. The cold probably would've froze you all!"

Meta flinched and snuggled next to Bate for warmth again. "I feel like I'm gonna freeze right now. It's so cold."

"Our home has a rather warm climate. It only snows for a few months where we live, and it's not nearly as cold there as it is here." Bate explained. "Not to mention our houses aren't made of snow or ice."

She curiously tilted her head, trying to think of such a place. "I can't imagine living somewhere that has no snow. What do you do for fun, then? No ice skating, or snowball fights. It sounds kinda boring."

'Boring?' Meta thought to himself. Has she not traveled to the other Novas? Peeking  out, he waved his hand to get her attention.  "There's lots to do in Kalmari Town. My friends and I go to the ocean to swim, and we have sand castle contests on the beach! Sometimes go into the forest to play hide and seek, oh-! And we have a really cool tire swing next to Kalmari lake that we can swing off of. We like to look at the clouds, and me and my teacher always star gaze late at night."

"Huh, I never heard of a beach before..." She scratched her head. "And sand castles...are they like snow castles? My friends and I built forts and snow Leos."

He thought she'd be just as excited but to his surprise, she started to back away.

"I'm actually not allowed to leave the village. We don't travel unless it's to hunt or gather food. So, ummm..... I don't think I'll be able to go to a whole different planet until I'm much older...."

"O-oh..." He faltered, but perked up once more when an idea sparked. "Well, Teacher and I travel all the time, so maybe we'll visit you again!"

"That won't be the case, unfortunately." Another voice spoke. All three looked at the entryway and saw an older Leo enter. He placed himself between them and Kesuk before talking to Meta. "Our village doesn't welcome outsiders, be thankful your teacher was able to fight through the blizzard to reach this place. Once the storm passes, you will not be allowed back."

"W-what? but dad!" The Leo cried once hearing that. "Can't they be an exception? They won't hurt us, they're really nice! "

"That's not the point, Kesuk, and you know that." He spoke in s strict manner that even got Meta to inch back. She gave a small frown, not liking the idea of losing her new friends.

"Could...I at least show them around the village? Please?" She begged. If this was truly the last time she was going to see them, she wanted to show them everything before they left.

He looked at the pair and pointed to Meta. "The child could go, but the other stays." He said, still uneasy of having outsiders in their village.

"B-but..." Meta sadly looked back. He didn't want to go and have Teacher miss out on all the fun, too. It just wouldn't be the same without him.....

"Go on, Gumball." He smiled to reassure his worried state. "I need to rest up anyways. It's still a long journey to Atka's home, so run along and have fun."

The Leo took his arm before he had a chance to say anything. She lead him out of the room and motioned him to follow. "C'mon! I wanna show you all the cool shops we have!! Tell me if they have anything similar to your home!" She said, excited to show her new friend everything before it was time for him to leave.
​
-The End-
​​​​​​Artist Comment:

So after much deliberation, I decided to move Kes to Meta's arc. She was previously a next gen character, but after creating Prim, I like the idea of having Kes appear when Meta's still a kiddo. I still have a lot of things to write about it but for now, here's a cute little illustration of their first meet up. It takes place when Bate and Meta were going to visit Atka. A sudden blizzard hit and Bate stumbled upon Kes' village for shelter.

Hmmm....I wonder what could've caused that sudden blizzard. Maybe check out this illustration for clues?

Kes seems super happy to meet outsiders. It just so happens Meta is the best when it comes to befriending others! What will happen? Will they see each other again? Stick around for more!
Species © Nintendo/ HAL Laboratory
Interpreted characters created from said species © Rhylem