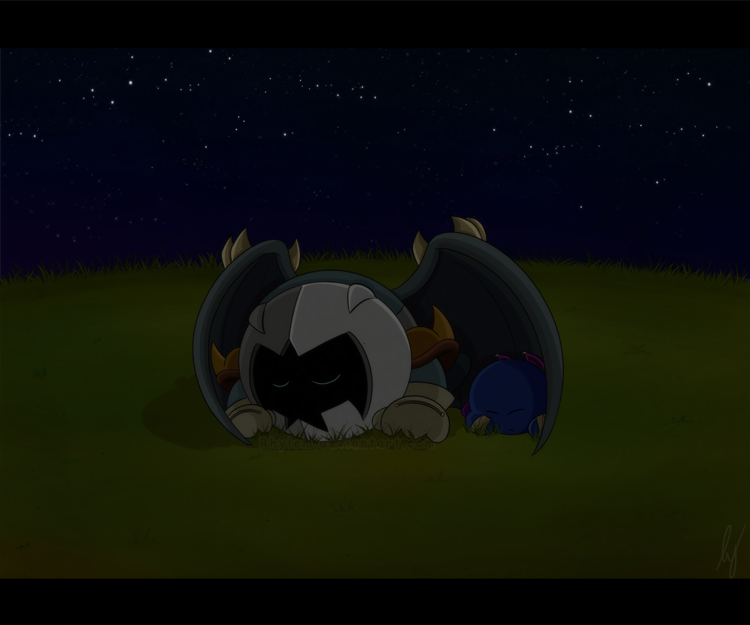 Sir Bate / Meta
​
​
​The first day of Weaponry class with Sir Gordon ended quite....terrible for a certain, navy blue, puffball. Meta dragged himself to the doctor to patch up his newly formed wounds caused by Arthur. Thirty minutes later, Meta left the building and started to walk toward the edge of town, hoping to find his previous instructor, Sir Bate...or “Teacher” as the young puffball calls him.

Meta visits him a few times a week to tell him all about his day. Even though his teacher usually doesn't talk much, he thinks it’s much better than talking to his comrades. Most of them can never keep a secret for very long....or listen to him without making some type of snappy commentary. Within a few minutes of searching, the young puffball found him lying down on the side of a crisp, grassy hill. Meta quietly trotted his way towards him.

"How can I tell you about my new class if you keep dozing off?"

The elder puffball glanced at his former student and let out a frustrated sigh. "I was sleeping in the first place before you even arrived!"

Meta, being the stubborn gumball he is, sat down on the grassy hill next to his teacher and started talking again. "But that's all you ever do." He whined.

"Could you stay up, just this once?"

"You do this every time I visit."

"Can you at least pretend to be listening?"

Meta crossed his arms and turned away from him. "You don't even talk to us anymore.” His voice lowered to a whisper. "Don't you miss your students?"

Finally disappointed by the lack of care and interest his teacher showed, Meta slowly got up to make his way back towards town. Just as he was starting to walk, something grabbed his shoulder.

"Hm?" Meta looked down and saw it was his teachers’ glove. The old instructor slowly got up and walked towards Meta. A few seconds passed before he finally spoke. Unfortunately, Meta couldn’t hear what he was saying. All he could make out were the words “Arthur” and “Sir Gordon.”

“Teacherrrrr, you're mumbling. I can't understand what you're saying.

“I- urm....you said you got hurt by Arthur in Gordon's class” he replied. “Then you had to go to the doctor because he cut your hand trying to disarm your sword.”

Meta was shocked. Did his teacher actually listen to him? It always seemed like he never cared or noticed him when he visits.

“Of course I was listening, I always do.” He paused for a second. “And of course I care for my students…even if it’s never spoken out loud.”

“So he was listening after all!” Meta thought, a smile slowly forming on his face.

Satisfied by his teachers response, both puffballs sat back down and quietly watched the warm, evening sunset disappear into the night sky.


Bate glanced down at the tiny puffball.

'Odd child..... spending your time with an old geezer when you could be having fun with your friends.'

Unless it had something to do about his class or lessons, Sir Bate was never the one to casually talk to others. He'd never thought of it as a big deal until he saw the disappointed face of his former student. It's not like he hates being with others. No, it's quite the opposite. Company is the one thing he enjoys the most…though his version of having ‘company’ is askew to the towns’ norm.

He believes that the Presence of the person you're with is better than any form of spoken language. 'Not everything little thing needs to be said out loud.' He says to himself. So he can’t really help it when he gets a bit flustered when somebody talks to him, that’s just how he is. Was he wrong? He never questioned his morals, until today. Maybe, just maybe....

His train of thought was interrupted when he felt something brush up against his side. He looked down and noticed the sleeping figure next to him. Wait, Meta was…sleeping? A small smile crept under the elders mask.

'Heh…and you get angry when I sleep?' He thought, clearly amused what he was seeing.

Glancing at the sky one last time, Sir Bate quietly curled up on the patch of grass next to his student.

“You better not make a habit of this....Just for tonight.” He murmured.

He shielded the sleeping puffball with one of his wings and started to drift off to sleep.
​
​
​-The End-

I believe this is the first piece of art that revealed the names of the two instructors- Sir Bate, and Sir Gordon. x)
​
​Species © Nintendo/ HAL Laboratory
Interpreted characters created from said species © Rhylem