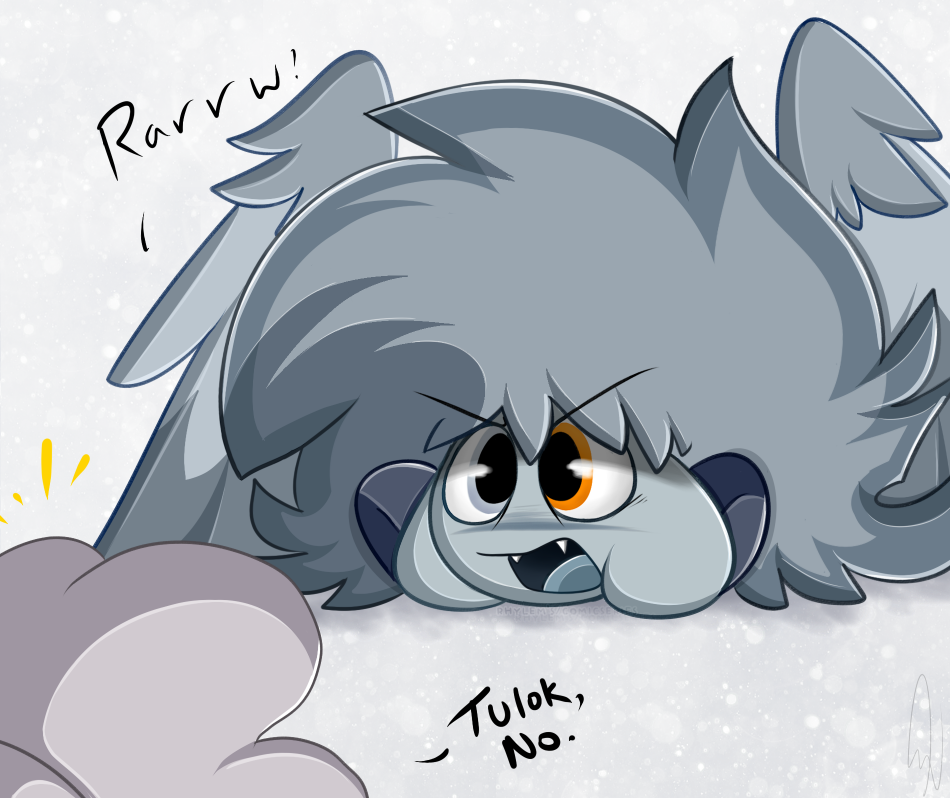 ​
Tulok instantly fluffed up his wings in caution when a gloved hand belonging to his father reached forward to grab him. He opened his mouth where two small baby fangs showed, and instantly chomped down on his hand.

“Tulok, no.” Meta spoke, condemning the child when he starting to bite. While it didn’t hurt, his gloves where much thicker compared to his son’s baby teeth, he knew he had to nip this behavior in the bud before it escalates to something even worse.

It didn’t take long for Meta to quickly noticed that Tulok greatly took after his mother; looks and demeanor. He’s become restless, feisty- always wanting to challenge others despite him being a toddler.

Kes informed him that many Ice Leos around his age behave the same. The only difference is they have siblings or others their age to scuffle and scrap around with. Tulok unfortunately doesn't have anyone, and if they were to put him in a daycare with others, the outcome will surly be a disaster with how rough he plays.

It’s been like this ever since several of his sharper teeth grew in. Tulok has been seen biting, nipping and chomping away at Meta’s wings- all of the other  toys he bought were reduced to shreds by the end of the day. It doesn’t effect Meta in the slightest, but he’s starting to notice Tulok will try to bite anything that gets near him. Several occasions he had to cut his doctor appointments short because he kept trying to bite anyone that got too close.

While Kes sees it as normal behavior, Meta disagrees. They’re not in South Nova, and his son needs to understand that attacking anything and everything within a 10 inch radius of him is not okay.

“Kes, he’s biting again…” Meta spoke, bringing the child into the kitchen where Kes was just about finished making their lunch.

“How else is he going to learn to properly chew his meal when I take him out hunting?” She asked, taking the child from his hands. “Honestly, Meta, all Ice Leos do this around his age. It’s perfectly normal behavior for a growing child like himself.” She once again relayed the same message to him.

“Yeah, I get that, Kes, but he keeps trying to bite anyone that gets near him. He’s starting to show aggression, even when I try picking him up.”

"Oh, he’s just playing with you. Isn’t that right, my little Ice Cube?” She cooed to the child and nuzzled his cheek. Tulok babbled a few times, a smile clearly shown on his face that caused Meta to narrow his eyes in frustration.

Kes noticed he didn’t seem as amused as her, so she gave a small sigh and faced the Puff. “I’ll get something to help with his chewing if it’ll make you feel better. Typically we use slabs of cured meat for them to gnaw on, I’ll get some in the shed once we’re finished with our lunch.” She spoke like this was something all parents did with their children.

“Could you please remind me if we're still talking about our son, and not some wild animal. You’re really going to give him a dead carcass to chew on?"

“You know there’s a difference, so hush. You keep complaining about his biting and when I offer a solution you still complain. How are all those teething toys you bought for him doing, would you care to remind me how that went?”

Meta opened his mouth to respond, but quickly shut it when he knew she was in the right. He looked to his side where he saw Tulok nibbling on his rubber spoon and slightly nodded. “Okay, we’ll try your way…even if it is a bit bizarre.”

“Yeah, well, that’s what you signed up for when you decided to marry me, huh?” She teased.
​​​​​​Artist Comment:

Tulok's baby teeth are starting to grow in, and Meta must deal with his terrible biting habits. XD It's actually quite common behavior for younger Ice Leos since they all have sharp canine teeth to help rip their prey apart. oAo; Tulok is getting a bit aggressive once they started growing in, and unfortunately poor Meta has to deal with it. Tulok usually bites his gloves and wings when he gets too close to him. Since Meta is much older it doesn't hurt him, but there are noticeable markings on his wings due to it. You could say he's Tulok's personal chew toy. XDD
Species © Nintendo/ HAL Laboratory
Interpreted characters created from said species © Rhylem