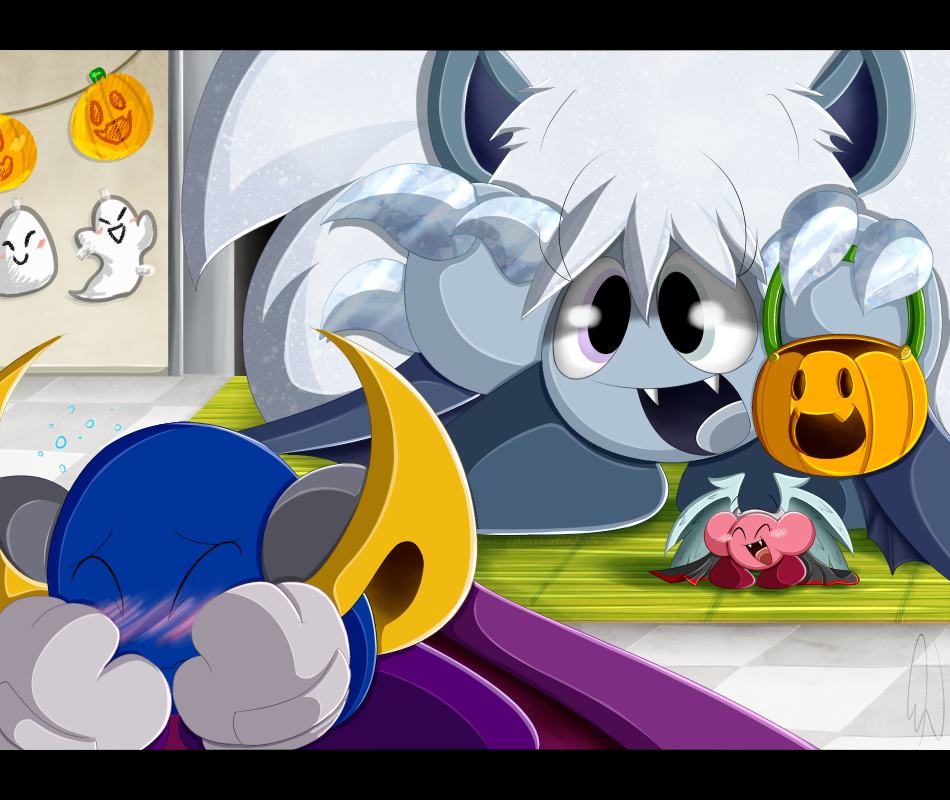 A Pop Star Halloween!
Kes / Meta / Kirby
​
Meta quietly listened on the other end of the phone while his mentor talked about the evening he shared with his Grandkids. Since Kalmari is almost a day ahead, they already had the pleasure of celebrating Halloween. It was nearly midnight in Kalmari, and Meta decided to give his mentor a late call to make sure everything was okay before preparing his own home for tonight.

“Atticus was ecstatic all of the pumpkins grew were ready on time. He, Tula and Cellic had a Pumpkin Carving contest at Falspar’s place before bringing them over to show me. “

The cheeriness in his voice could clearly be heard, and Meta hummed in response as the elder continued.

“The kids wanted me to come along while they went trick or treating, but I don’t think I would’ve been able to keep up so I stayed behind and helped Falspar finish decorating the cupcakes he made for them.”

“Falspar’s making them cupcakes knowing they’ll be returning with several sacks of candy? Really? Why doesn’t he just let them eat straight out of a bag of sugar while he’s at it.” He huffed. “I assume the sugar rushed faded already?”

“The group tuckered out hours ago, just how like you and the others were back then.” He mused. “Speaking of which, is Kirby excited to go out tonight?” He asked.

“Kes took him to go costume shopping awhile back. Once they return, we’ll take him to pick out a pumpkin.”

“I’m sure he’ll enjoy it just as much as his cousins. I can’t wait to hear all about it when-“

“Meta, we’re back!” Kes’ voice called out which alerted both warriors.

“Ah, perfect timing.” Bate spoke. “Well, then, I best be off. Give everyone my warm regards. Oh, and Meta? Try not to eat so much candy.”

“Teacherrr….” His voice softly winced as he struggled not to sound like a child being scolded. “I’m not a baby anymore. I think I’m fully capable of limiting myself.”

“Oh, of course you are.” He spoke in a slight humorous tone. “ I’ll just forget about the incident from last year then.” He teased.

“Goodbye, Teacher.” Meta mumbled through his mentor’s fit of laughter as he placed the phone back on the receiver. He strolled out of his room and into the kitchen to greet everyone.

“That was Teacher, he sends his regards to-“

Meta stood at the doorway when he saw the pair. He didn’t speak a word; his eyes shifting between each one before he mustered up the effort to speak.

“Like it?” She smiled as she held up a pumpkin shaped candy bucket. Fake wolf ears adorned the top of her head, and large blue bat wings drooped behind her. She also had a pair of fake fangs, and used her ice ability to form sharp wolf like claws.

“The lady working there gave me a discount! I told her I never celebrated before…I, ah...think she felt sorry for me. There wasn’t much left, so I decided to go with a werewolf! ”

“And the bat wings?” He asked.

“Ba, ba, baaa!!!” Kirby spoke as he lifted his cape and flashed his vampire fangs to try to scare Meta.

“You can thank Kirby for that. He wanted me to be a bat too, so now I’m a wolfbat!”

“A…wolfbat?”
​
“Yeah! I’ll admit, I wasn’t keen on this whole dressing up for candy tradition, but now I’m pretty excited to share the evening with you and Kirby. I was thinking once we get back from the pumpkin patch we can, um…..“

Several strained coughs from the other caused Kes to stop mid sentence. She noticed Meta quickly turning around as he covered his mouth. He was clearly struggling to speak, so the Leo worryingly rushed to his side as she feared he was choking.

When he couldn’t speak again after meeting Kes’ eyes, the Leo paused for a moment. Eventually after observing him for several more seconds, she noticed it didn’t sound like he was choking, but trying to hold back laughter.

Kes couldn’t help but crack a smile, and she motioned Kirby to get the market bag in the other room. Crinkling from the bag can be heard not a moment later, and Kes shuffled through it before pulling out another set of wolf ears and placing it on Meta’s head.

“Laugh at us all you want, you’re dressing up too. You already have the bat wings covered, now let’s go.”

“I’m not going out with this on my head. I’ll look stupid.” He spoke and reached up to take it off. The warrior faltered when several ice specks hit his hand before he had the chance to grab it.”

“Then I guess we’ll look stupid together. If Kirby enjoys it, then you better believe you’re not taking it off. Isn’t that what you used to do to Bate, if I recall?” She idly tapped her chin as she waited for a response.

“I….”His eyes flushed to a bright pink before going back to yellow. “A..Are you going through my photo albums again?”

“No, Bate showed it to me while I was visiting several winters ago. Now quit complaining and let’s hurry before all the good pumpkins are taken.”

“Ba ba ba ba!! Kirby cheered as he held out both his hands so they can each grab one.

“Okay, okay- but if someone gives me candy for it, you better not complain when I eat it.”

“Don’t complain when you’ve eaten too much, then.” She laughed, referring to the incident last year.
​
Meta figured his mentor told her about that too, so without saying a word, he took Kirby’s hand and hurried out before she had the chance to bring up more embarrassing tales.
​-The End-
​​​​​​Artist Comment:

Here's a silly little literature piece and illustration for Halloween! Kes, Meta and Kirby celebrate spooky month and decide to dress up for trick-o-treating!!!  I wonder what that incident Meta had last year. XDDD Maybe eating too much sweets?
Species © Nintendo/ HAL Laboratory
Interpreted characters created from said species © Rhylem