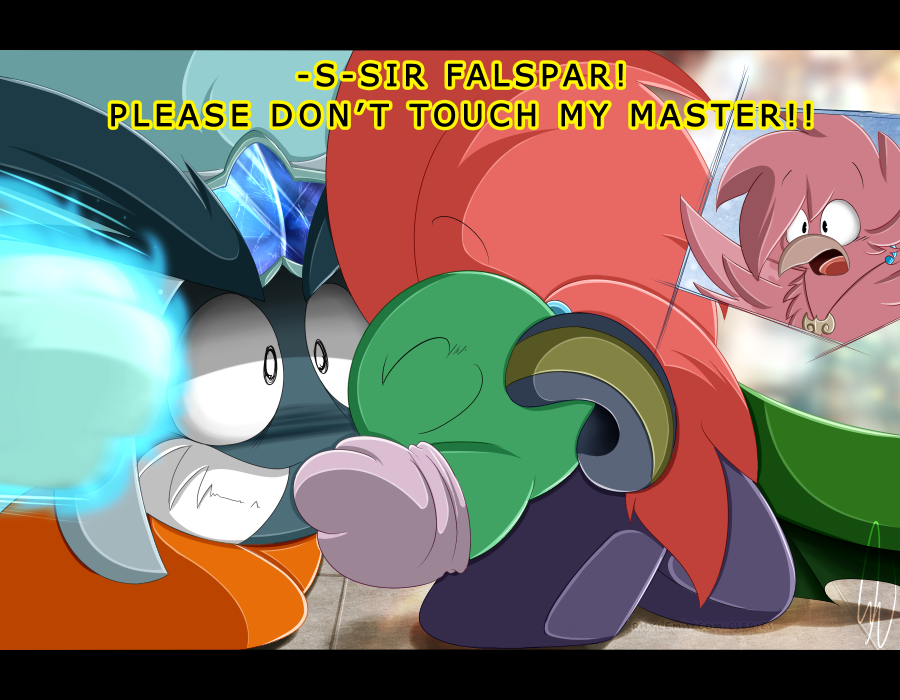 "Does it still hurt?"

"A little, but I'll be fine." Falspar said, reassuring Drani as he continued to hold the ice pack to his cheek. His weak smile soon spiraled into a troubled frown, and he apologized to the Guardian for not listening to her. "I shouldn't have done that. I...I didn't think he would actually....y'know." He sighed, "I mean, I thought we were finally starting to become friends. But I guess that option is clearly off the table. He hates me."

"He told me to stay away from him. I'm pretty sure he made it clear he never wants to see me again." He turned away, saddened at the thought.

Drani hesitated. She looked away as well, not really sure how to approach this with a careful touch. This warrior clearly cares a lot for her master. But the problem is he's very impulsive, and does not listen well. She warned him time after time never to engage in physical contact with him, and he failed to listen. Because of it, he received a very painful reminder from her master. While many would cower away and avoid Pyrell after said incident, Falspar was still persistent. Drani was truly amazed by his determined demeanor. Falspar, though stubborn, was the first one to keep chipping away at wall her master created. He never once let Pyrell's anger or threats faze him. He wanted to be Pyrell's friend. Falspar truly had a heart of a noble Star Warrior.

But...would she be able to trust him enough with their secrets? Would Falspar be able to resist confronting Pyrell if she opened up about their past? And will Pyrell resist hurting Falspar if he dared bring it up to him? She wondered....

"Um..." She spoke. It was small, and shaky, but it was enough to catch Falspar's attention. He turned around and gave a small glace her way.

"Hm? What are you talking about? He wasn't saying it to Meta or Dragato. Clearly it was directed towards me. And that's fine, I know I blew it. You don't need to lie to me." He sadly spoke, resting his head on the table.

"I know my master more than anyone. You trust me, right?" She got a bit closer- now standing in front of the warrior. "If I said he wasn't saying it to you, then you have to believe me. You...want to be friends with him still, correct?"

'But nothing." she shook her head, looking up with much seriousness. "Then you must listen to me, Sir Falspar. Please...just listen. If I tell you this, you must swear not to bring it up to him unless I say so, okay? Because if you do, I know for a fact my master will not only cut ties with you, but he will leave the GSA all together. If you care for him, and want him to open up to you, then you must agree to my terms."

Hearing her words quickly caught his attention. Clearly if Pyrell was going to leave over this particular issue, it must've been something really important. He failed in the past to listen to her, but if he's able to shut up and do what he's told, then maybe there was still hope in mending their friendship. Giving a nod, he made a promise not to say a word. If Drani trusted him enough with this information, he needs to do the same and trust that everything's going to work out in the end. She was Pyrell's Guardian, after all.

Once Falspar gave a nod, Drani cast her gaze on the table she was on before closing her eyes.

"My master has been though a lot before arriving at the GSA. He's been broken and hurt many times. We don't talk about it much, because I think we both hope it'll one day go away....."

"But..it hasn't. The memories...the flashbacks." She whispered. "My master suffers from severe trauma from all he's endured as a child. He was beat and abused to the point where if anyone were to touch him, flashbacks of his past would resurface. He's been haunted and traumatized by them, and I take it upon myself to calm him, and reassure my master that we're not back there anymore."

"Back..there?" Falspar questioned, not fully understanding. "You lost me, Drani. Where is..."There" exactly?"

Drani slowly started to turn away from Falspar completely. Eyes still focused on the table, Drani knew there was no turning back now. He was about to know everything about their dark past.

"A place long abandoned. Where me and my master grew up. Our home in East Nova." She explained. "Like I said before...my Master wasn't talking to you when you were trying to hug him. He...was talking to his Father, Rizen. He...is responsible for making my master the way his is now. He almost killed him...he almost killed me. He was a terrible, horrible monster who locked my master up in a small prison for several long years of his adolescence. He would constantly abuse, torture...and....a-and...."

Her voice lowered; unable to finish the rest. Just mentioning it caused her stomach to turn. She never talked about it with anyone before, so finally saying it out in the open caused her to tense up.

"Just....he shattered what little hope my master had left." She quietly spoke. "So when you hugged him, the Pyrell you knew was already gone. He wasn't at the GSA outpost with us-  he was back in that little prison cell in East Nova.  My master avoids others not because of reasons of superiority or ranking, but rather because he's afraid."

Unable to speak anymore, she decided to end it there. Hopefully she said enough for him to finally understand. As she was about to face Falspar again, she let out a small chirp when something wet hit the top of her head. Drani spotted small specks of tears hit the table. She glanced up just a bit more, and noticed his hands quivering on the table. Droplets of tears stained them, while his body quivered with overwhelming emotions. Finally looking up, Drani watched as Falspar reached up to wipe the tears dripping down his face.

"So because I didn't listen, I ended up hurting Pyrell."  He spoke. Drani was trying to help him all this time, but he never bothered paying attention. He completely ruined several months of hard work all because he though he knew better. "I'm such an idiot, why didn't I listen!??" He snapped out of frustration.

"You had no ill intent, Sir Falspar. I know you were doing it out of friendship. But my Master will need some time to himself. I will stay by his side until then. Hopefully, we'll meet again under better circumstances."  She spoke, preparing to leave.

"So...am I just going to have to wait?" His voice was soft, and most of his hair was now covering his eyes. "I..I can't see him right now?"

"Not at this time, I'm afraid. I think it would be for the best."

"Normally, I would've ran out the door without a second thought...but I finally understand now. You're Pyrell's other half. If..you think I should wait, then I will." He lowered himself and reached out to lightly pat her head. "Thank you, Drani."

"Of course, Sir Falspar." She bowed.

"Yes, I would be glad to." She nodded, waiting for his response.

"Hm...saying sorry would raise up more questions. I wouldn't want that." He thought. "Telling him I'm not angry may make things a biiit awkward. I gotta think of something perfect. Something I know would cheer him up..but not raise any suspicions."

After a few minutes of thinking, Falspar finally got it! He looked at Drani, and gave her a small smile. "Hey, could you tell him he has a powerful right hook?"

Drani let out a small giggle, knowing her Master will be slightly amused from that. "You're a really good friend, Sir Falspar. Although my Master has not said it yet, I hope one day he will. You truly have a pure heart."

With another bow, Drani took off to her Master. Although it may take much longer for Pyrell to open up, Drani has a good feeling Falspar will wait. For her Master's happiness, she truly hoped so.
-The End-
​​​​​​Artist Comment:

A small snippet from their younger years in the GSA. It seems like Falspar got a little too close for Pyrell's liking. Pyrell ended up punching Falspar as a result, and the literature takes place shortly after the incident. Drani helps comfort Falspar, and eventually tells the warrior why her master reacted the way he did. It's...not something she likes to talk about.

Taken from my doodle dump here: 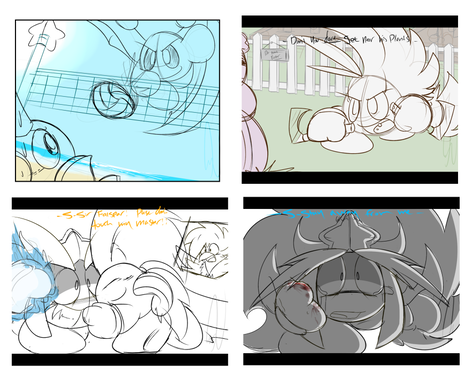