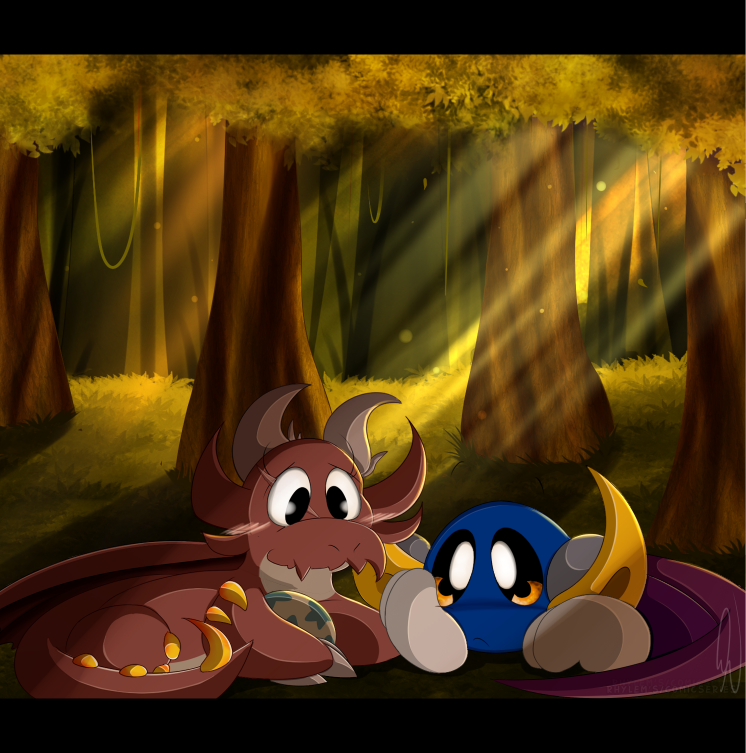 ​The forest of Whispy Woods provided a soothing breeze for the pair who currently sought shelter under its many trees. Cradled gently in the young hybrid's arms, an egg. A small, surprisingly sturdy egg with teal stars adorning its shell. Vee quietly sat in the center of the forest where the sunbeams reflected off the polished shell; giving the egg a somewhat vibrant glow. From her side, Meta quietly watched her care for it.

"So, how long does it usually take to hatch?" Meta peeked over and observed the object in question.

"Around 5 months." She spoke, "But I believe he said it's been incubating for several weeks."

"Huh...." He crossed his arms and gazed up at the trees above. "I still don't understand why he left you with it. Do all Winged Eggers leave their off-springs with someone they've never met before?"

"We're not strangers, Meta." Vee giggled, "I've seen him around a few times, we're like family!"

"What, like 1 or 2 times?" He raised his brow. "I think that still counts as being strangers, Vee."

"Well, Winged Eggers are different when it comes to relationships. We trust one another unconditionally, and if they need help, we'll help them- regardless of how long we've known each other. That's just how we are, we're fiercely loyal to our kind." She explained to the clueless Puff.

"But enough to trust them with their unborn child?" He stressed.

"Well, Kana seems to trust you enough to take care of Kirby." She said. "And didn't your teacher do the same with you and your comrades when you were younger?"

She waited for her friend to reply, but noticed he shyly turned away, softly mumbling to himself when he couldn't give a proper response. The hybrid could only laugh as his childish response.

​VVVV Personal headcanon for Winged Eggers below. VVVV
​
​Winged Eggers are extremely loyal to one another. Seeing as they’re a rare, dwindling species (due to many being hunted off for their armor like skin), they treat, and protect one another like family. Because it's usually the babies that are hunted since they're easier to skin, many parents treat the infant Eggers as their own. ​ If one is in needs help, they will always seek another Winged Egger to assist them. It’s a practice they are taught at a very young age, which carries on to adulthood.

In this case, a lone Winged Egger spotted Vee, and desperately begged for help in taking care of his Egg since his mate was unfortunately killed. He needed to find a new nest, and asked her to watch over it until he got back. Without hesitating, and to Meta’s surprise, she said yes to his request. Meta finds it odd how someone could put so much trust in a stranger like that, especially if it’s an egg containing their child. Vee then explains to her clueless friend the customs of their kind. (Though it seems like he's still having trouble accepting it.) XP

It’s an extremely old tradition all Eggers follow, and many consider them the most devoted, loyal species throughout the hot lands.
Species © Nintendo/ HAL Laboratory
Interpreted characters created from said species © Rhylem