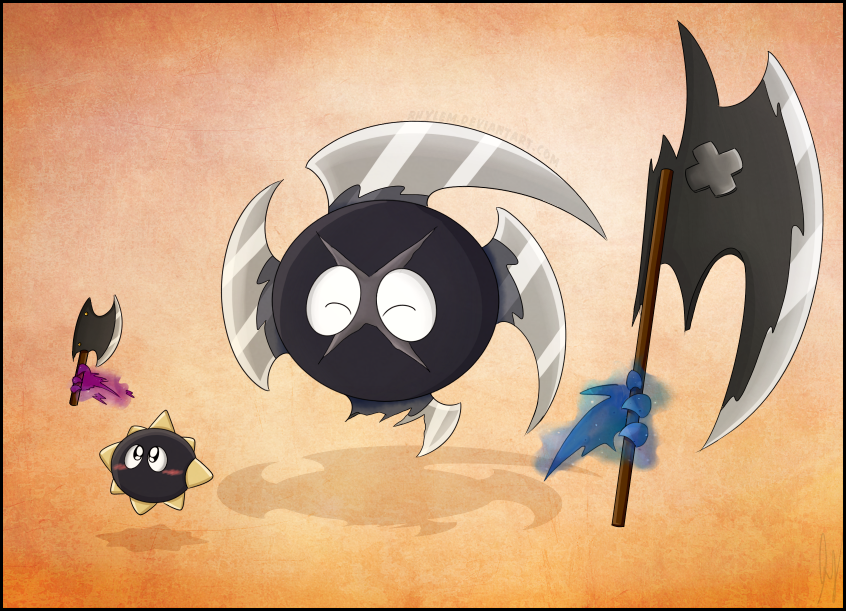 ​​
My birth name is not Gordon. No, I was referred as Gordo #7943-a mere number. I never understood the significance of having a name; I guess was too young to understand at that time. But now, thinking back, I am truly grateful I was given one....even if it was something as simple as putting a "N" at the end of my species name.

The one who gave me my name was a Blado. His Crux name, as he would put it, was Blado #777. He was my mentor, my teacher.....my only friend as a child. Through his eyes, he didn’t see me as a number. He taught me that every creature is a separate being and should be given a name to show that.  He knew the value, the importance, the meaning of one’s name; that’s why he gave me one when I first met him.

I know, deep down, I wouldn't be alive if it weren't for him. He helped me so much...up to the point where I was able to break free from Central Crux and somehow end up in North Nova. There, I was able to meet my best friend, Bate. We now live together in West Nova, teaching brats how to fight n' junk. Because of him, I am able to live my life as Gordon; not Gordo #7943, but as Gordon.

Even if my name is simple, and everyone mocks how unoriginal it is, I know there's more to it. The story of how I was given a name to replace the false name I was born with. My purpose; it all solely relies on my name- Gordon.
-Gordon's Past-
Age: 400

​
Silhouettes of two figures appeared at the top window of an unknown factory. Both were observing a lone Gordo below them.

"Hmmm...." The other figure started to scribble notes on a clipboard he was holding. "Well, it seems like Gordo #7943 is spared for now."

He looked at the Gordo one last time before walking towards the exit. "Get Blado #777 out here." A sly smile slowly formed on his face.


Gordon #7943 is one of many Gordo's who currently resides in Central Crux. He lives in a giant factory which houses many other Gordo’s like him. Every day, workers would gather and ship all of them off-#7943 was an exception, though. He doesn't know where they go, exactly, but his creators say they are safe and that he shouldn't worry about it. He does get a bit lonely in the factory when they all leave, but more Gordo's always appear when he wakes up the next day. They aren't the same Gordo's as before, but he knows that his creators are taking good care of the others....

The little Gordo looked at his surroundings. #7943 found himself in a different, more secluded, part of the building. There was only one door, and a small window located at the very top of one of the walls. The only source of light was a small ray in the center of the room.  He stood in the center, patiently waiting for an explanation to as why he’s locked in.  An hour past and nothing happened. Fear started to consume and chew at him.


He quickly spun around when he heard the sound of the door opening. A giant figure appeared before the Gordo. It looked just like him, sorta- he didn't have spikes, but sharp blades instead. He has an x shaped scar on the front of his face and one of his blades looks like it's been ripped off. They both looked at each other for a few minutes before the
figure finally spoke.

The Gordo didn’t quite understand what he was talking about. ‘That’s my name, though.’ He continued to watch the Blado talk to himself.

“Yes, that’s what I said.” He headed back towards the door and looked at him one last time. "I’ve been given the orders that you’ll be staying with me for the time being. Let’s go.”


Gordon was silent the whole day. He didn't like it here. He wanted to go back with the other Gordo's, but was forbidden to leave and ordered to stay in the top part of the building with the Blado he just met. He formed a small hand to wipe the tears dripping down his face. Gordon casted his eyes on the Blado; he was currently looking at the view of Central Crux through the large glass window in the room. Gordon slowly crept behind him.

"I..I mean, the creators....they gave it to you, s-so I t-thou-" Gordon fumbled with his words. He was too scared to make a decent response for him.

"The creators?” He spat , “They couldn’t even bother giving us decent names! #777 is NOT a name, it's just a stupid label given to us created species!" He summoned one of his hands and swiftly punched the window in front of him. Small shards of glass scattered around Gordon.

"It's a fake, empty name and means absolutely nothing, got it?!!" His voice echoed throughout the whole room.

The tiny Gordo cringed from the sudden outburst. More tears started falling from his face. "I...I'm s-sorry." He stuttered.  Gordon backed away and hid behind a bunch of old crates in the corner of the room. He left him alone for the rest of the night. A few hours passed before he slowly drifted off to sleep. He hoped, somehow, he’ll wake up with the rest of the Gordo’s tomorrow.

Gordon woke up and was slightly disappointed to see that he was still in the same area as last night. “Huh?” He looked down and saw an ax lying across from him.  “This wasn't here when I fell asleep, where’d come from?"

Gordon turned around and saw the Blado from yesterday. He got scared and edged his way back to the corner.

"I heard you could create hands like me." He closed in on the Gordo. "Let me see them."

He stared at the Blado for a few seconds before bursting out in tears again. "No! I hate you!! Get away from me!!"

"W-what did you say?"  The Blado was shocked, to say the least.

The Blado went over and patted the little Gordo on the head. "So you do have the hands." He studied at the small, purple spectra in front of him. “Ah, yes, you’re just like me.”

He nodded.  "You know....not everyone is like us, Gordon. We're able to create these strange, hand-claw-things." He let out a light chuckle, "It baffles the creators, to my sheer enjoyment."

“Not everyone, Gordon. Tell me, have you ever seen another Gordo with hands like ours?"

"Huh?" Gordon thought back. Out of all the years he's been living with them, he's never seen another Gordo who's able to do what he does.

Gordon looked at his hands and then at the Blado. "I-is that why I'm with you?"

"That's exactly why.  You’re the only one beside me who has this unique ability...I guess they thought we’d get along.”  He paused a bit before continuing, "Gordon, I....I didn’t mean to scare you yesterday.” He let out an apologetic sigh. “Being here, all alone, I can’t remember what it feels like to be around others...especially if the other is just a child. I'm here to be your friend, not your enemy."

He waited for a response, but noticed that Gordon was focusing on something else. He was looking at the busted window from yesterday. A wave of guilt flooded the Blado.

“Bullet!” Gordon pointed at him,  “You’re really fast, the way you broke the window n’ all, so..." A small smile formed on his face, "Can I call you Bullet?”

“Bullet?” He pondered the name for a brief moment. “Why?”

​In Central Crux, we are nothing but two names drowning in a sea of numbers. #777 -Bullet  ​
​
-The End-
Artist Comment:

Growing up, Gordon was raised by an abused Blado who shares the same ability as him.
Species © Nintendo/ HAL Laboratory
Interpreted characters created from said species © Rhylem